A grave undertaking for Gainford couple 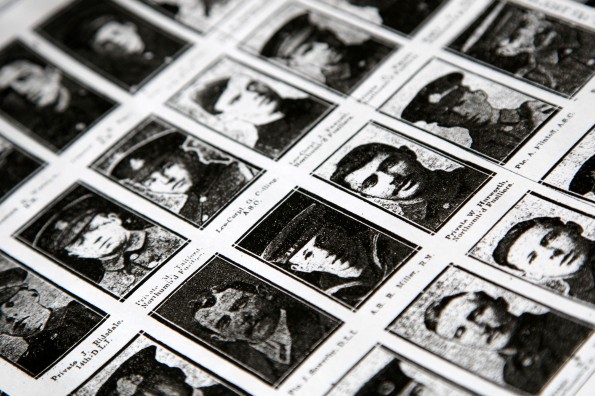 ULTIMATE SACRIFICE: A clipping from The Northern Despatch of Gainford soldiers who died during the First World War. Picture: TOM BANKS

A COUPLE have embarked on a poignant pilgrimage to visit the graves of all 25 First World War soldiers listed on a Teesdale war memorial.

David and Sandra Pullan have travelled to France and Belgium several times, to pay their respects to fallen soldiers whose names are engraved on a stone memorial in Gainford.

They have spent more than a decade carrying out extensive research into the soldier’s backgrounds, uncovering where they lived, fought and where they were buried.

Mr and Mrs Pullan hope to collate the information and create a book which will be kept at St Mary’s Church in Gainford for visitors to read.

Their research is also being shown as part of an exhibition to commemorate the start of the First World War at Darlington Library.

The husband and wife of almost thirty years said they thought it was only right and proper that the soldiers listed on the memorial each had a visit from somebody in Gainford to ensure they are properly remembered. 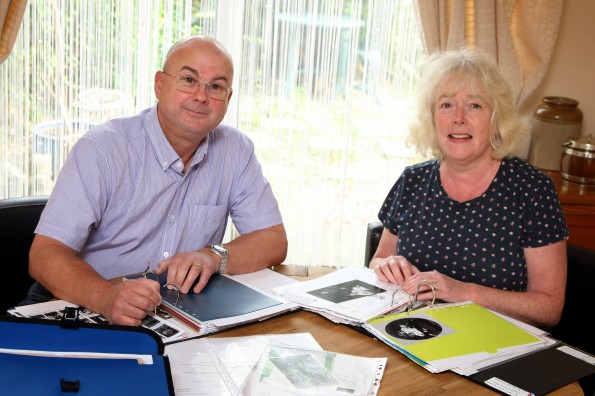 WAR RESEARCH: David and Sandra Pullan, of Gainford, are researching the history of Gainford soldiers who died during the First World War. Picture: TOM BANKS

Mr and Mrs Pullan started researching the history of the Gainford soldiers after they successfully returned a death penny to descendants of Mrs Pullan’s great uncle, Private Harry Finkle.

Every soldier killed in action in the First World War was given a certificate and a bronze plaque, known as a death penny.

Mr Finkle had no living relatives that the couple knew of, so they went to the West Yorkshire Regiment Museum (Prince of Wales Own) in York and read the battalion diaries to find out more about him.

Mr Pullan said: “We managed to find trench maps and now know he was in Belgium. We also know who he was with and what he was doing. We think he was killed on the same day as his commanding officer.

“He has no known grave, so he is remembered at Tyne Cot War Graves Cemetery in Belgium, where we have visited several times.

“The return of the death penny to his immediate family was a happy and proper conclusion for us. We used our knowledge and expertise we gathered researching Harry and applied it to the Gainford Fallen.

“You have to be tenacious with your research and write everything down as soon as you find it, because in another month it could disappear again.”

Mrs Pullan said: “We travelled to France and Belgium and the museums we visited were already getting ready for the centenary years ago. So that made us think about what we were doing here, in Gainford.

There are 25 names on the war memorial in St Mary’s Church in the village and the couple have identified 23 and visited 21.

Mrs Pullan added: “The two that we need to identify are a bit more challenging than the others as their names are J Smith and J Potter, which are obviously popular names.

The couple have also worked with the North East War Memorials Project to expand their research.

Mr Pullan said: “We have found three different soldiers as a result of my contact details being listed with them, so they need a pat on the back because they are doing a great job.

“Every time we visit a grave I take a photo and every memorial has a visitor’s book so I write ‘Remembered by the people of Gainford, lest we forget’ along with our name and address.”

Mr and Mrs Pullan discovered that Corporal George Ramshay Sutton, listed on the memorial as R Sutton, was born in 1890 and killed in action when he was 25.

His parents farmed at High Hulam, although his address was with his wife in Middlesbrough so it is possible he moved there.

They also found Private William Humberstone of Gainford, was born in 1878 and died age 38, leaving behind his family.

Both soldiers volunteered to fight and were part of the in the same battalion, the Northumberland Fusiliers 25th battalion.

They both died on the first day of the Battle of the Somme, July 1 1916, in the same battle field, or very close to each other.

Private Humberstone has a grave but Corporal Sutton is listed as having no known grave.

The couple’s work will form part of the commemorations for the First World War at Darlington Library from Thursday, October 30.

Mr Pullan added: “We won’t take all of our research because we have so much, we will concentrate on certain soldiers, including Sutton and Humberstone.

“Once we have all of the information on the Gainford soldiers we want to put it in a book for people to look at, that’s the intention.

“I hope when people see the exhibition that it inspires them, we want to tell people that it’s not difficult to carry out your own research.”