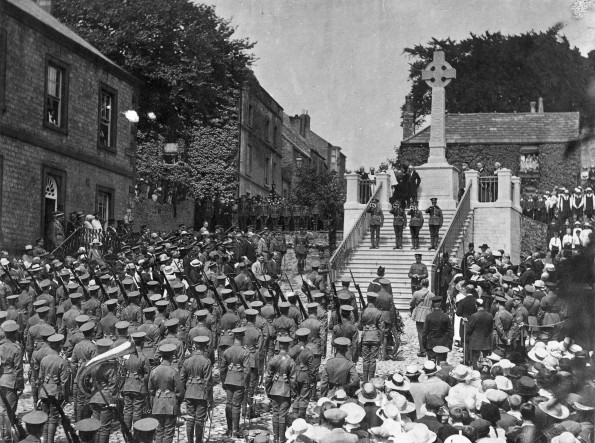 PROJECT: The unveiling of the regimental memorial at the top of Frenchgate in Richmond in 1921 Picture: GREEN HOWARDS MUSEUM

A REGIMENTAL museum is using the centenary anniversary of the end of the First World War as the inspiration for a new project.

The Green Howards Museum in Richmond is launching a “Ribbon of Remembrance” project with the aim of creating a lasting link between local communities and those involved in the conflict.

The team will research and collate images of those who served in the war and people affected, and build an online catalogue of portraits and biographies.

Over the weekend of Remembrance Day in November, they will also create a physical display between Richmond and Catterick Garrison, which people will be able to walk.

Educational sessions will be held at Richmond, Risedale, Hackforth and Hornby schools to create awareness of the project and encourage pupils to speak to their families about relatives affected by the war.

Carl Watts, learning officer, said: “We’ll encourage people to share their stories or use this project as a prompt to begin some research they had always meant to do but never got round to.”

During the First World War, Richmond Castle housed prisoners who, for religious or political reasons, refused to take up arms or aid the war effort.

The first purpose-built link between Catterick Camp and Richmond, now Rimmington Avenue, was created by German prisoners in 1917.

The initial Ribbon of Remembrance research drop-in session will be held on Tuesday, February 6, between 10am and 4pm at The Green Howards Museum.

Submissions can be made online at www.greenhowards.org.uk