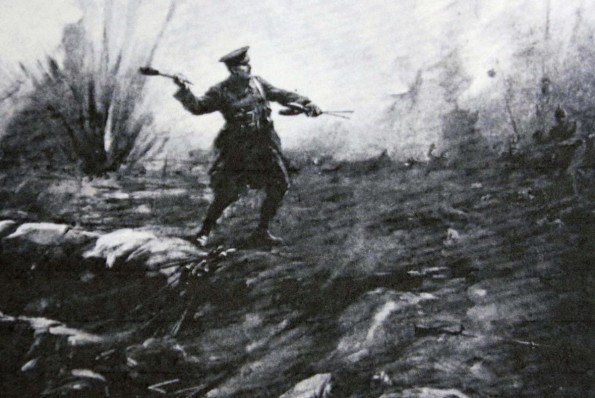 COURAGE: An artist’s image of L.Cpl Edward Dwyer protecting his trench at Hill 60 durign the Battle of Ypres 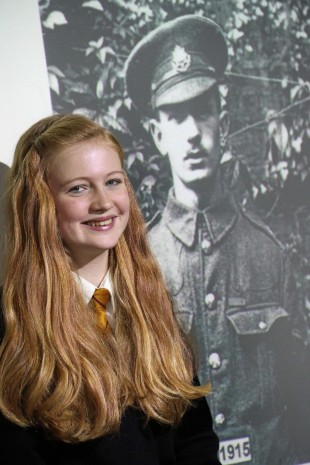 HISTORY homework has sparked a story of love and war after a schoolgirl traced her family tree to a heroic soldier.

Richmond School and Sixth Form College student Grace Morris, 13, was challenged to find a First World War story in her family and her research revealed a relative who won the Victoria Cross.

Grace of Hunton, discovered that her great, great, great uncle Edward Dwyer had single-handedly fought off German infantry, at the infamous Hill 60 in the battle of Ypres, by hurling countless hand-grenades to protect his trench.

Sustaining a head injury in the attack he was nursed back to health in a front-line hospital by a Canadian nurse who he later married.

One of the youngest to be ever awarded the Victoria Cross, the lance corporal, of the 1st Battalion East Surrey Regiment, was used in a national recruitment campaign – a recording of his voice is now the oldest remaining WWI audio record of its type. 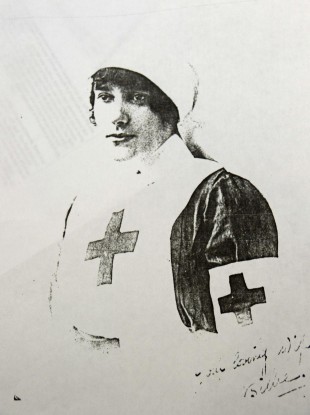 NURSE: Maude Barrett-Freeman, who tended the injured Edward Dwyer and later married him

He married his nurse Maude Barrett-Freeman in December 1915 but returned to France to fight again as he didn’t like his recruitment role. In September 1916 he was killed leading his men at the Battle of the Somme.

Grace said: “Edward wasn’t a model soldier; he was very mischievous. He stole men’s boots, sold them and claimed it was because someone had stolen his. The mayor of Fulham, where he was from, refused to put a plaque up because of that, apparently.”