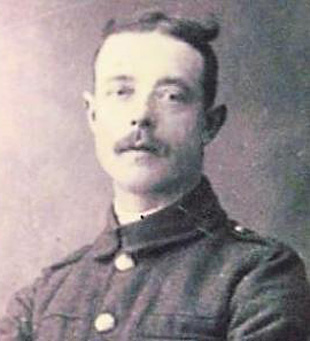 IN UNIFORM: Private George Walton at the start of the war

GEORGE WALTON, a 37-year-old quarry worker who was married with five children, set an example to other men when he became one of the first in Upper Teesdale to sign up for service in the First World War.

But it cost him his life, leaving his wife Sarah Jane to grieve with their son and four daughters at their home in Wesley Terrace, Middleton.

He had been in the Territorial Force previously. After training he went to France with the 6th Battalion DLI in April 1915. He was seriously wounded on the Somme in 1917 and after treatment was sent home early the next year to recover.

But he returned to France that April and was killed in action in July, after being promoted to lance corporal. He has no known grave but is honoured on the Middleton war memorial.

His children were George, Margaret, Greta, Laura and Hilda – and Laura later married another soldier, who had served in the war. He was Cyril Wilfred Ramsdale, who was 18 when he enlisted in the East Yorkshire Regiment in 1916. He was known all his life by the nickname Squib.

He wrote a long third-person account of his war experiences, reporting what Squib did as a runner, taking vital messages between units at the front, and guiding platoons through battle-devastated trenches.

He saw grim scenes of death and destruction, and a lot of his friends were killed.

He was mentioned in despatches for bravery. After being hit on the head by shrapnel he was in hospital for a few weeks. Then on his 21st birthday in September 1918, when he received no gifts or cards, he was firing a machine gun at the enemy when a shell exploded near him and ripped a gaping hole in his leg. 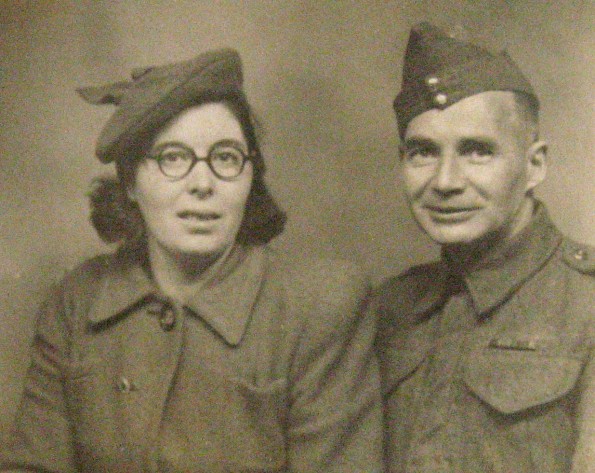 His account says: “Squib fancies he has been hit by a house end . . bowled over as though clouted with something heavy. Trying to rise, he is unable to, and painfully crawls back.” He was stretchered off to hospital as bullets screamed in all directions, and was still being treated the following year before being discharged. He worked as a railway clerk and married Laura in 1929.

They had five sons and a daughter.

He volunteered again at the age of 42 when the Second World War started. Told he was too old for action, he joined the DLI and became a prisoner of war camp guard. He later transferred to the Pioneer Corps and Royal Engineers.

He died in a tragic fall in 1950, when he was losing his eyesight.

Roger Ramsdale, son of Squib and grandson of George Walton, has been researching the life of both men. He has had Squib’s report typed and put into bound copies for members of the family. “I’m immensely proud of what the two of them did for our country and want to ensure they are always remembered,” said Mr Ramsdale, who lives in Harley Grove, Darlington.

After a career in heavy industry he became civic officer to the mayor of Sedgefield and was an official of Sedgefield’s twinning arrangement with a town in Germany. He has made many friends among the former enemy and will be visiting them this year.