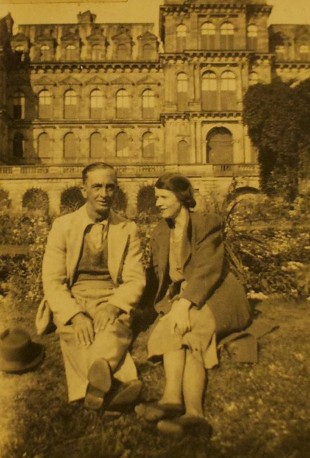 SAVED: Wilfred Smith and his wife, Hannah, in the grounds of The bowes Museum, in Barnard Castle, where his five brothers who died in the First World War are named on its war memorial

A SOLDIER dubbed the real-life Saving Private Ryan after he was brought home from the First World War when his five brothers were killed will be commemorated during a special service next week.

Wilfred Smith, of Barnard Castle, County Durham, was the only surviving son of Margaret Smith, of Bridgegate, after his brothers, Robert, 22, George Henry, 26, John William Stout, 37, Frederick, 21, and Alfred, 30, were all killed on the frontline.

The tragedies prompted a local vicar’s wife to write to the Queen, asking for her to intervene and send Wilfred, who was in his early 20s, home to his mother.

The young man was indeed returned home from France and a few years later, in 1923, the pair laid the first wreath at Barnard Castle’s newly unveiled war memorial, at the Bowes Museum.

Despite suffering chronic chest problems throughout his life caused by a mustard gas attack by the Germans, Mr Smith lived until he was 72 and raised five children with his wife, Hannah, in his home town.

Now the Smith brothers are set to be remembered with a special ceremony at the museum to mark the 100th anniversary since the first brother’s death, on September 19, 1916.

Students from Thrybergh Academy, in Rotherham, have also recorded a song, along with their music teacher Chris Clayton, in memory of the Smith family and their sacrifice.

‘The Boys from the Poor House Yard’ will be performed live by a choir of 106 children including some from Barnard Castle School.

The number of children singing represents 100 years since the first brother fell as well as the six brothers themselves.

Mr Clayton said pupils originally studied the family’s story during the school’s remembrance service last November when he was asked to write a poem.

However, he was so moved he decided to write a song instead.

All proceeds from the song, which will officially be released on Monday, will go the the Royal British Legion and Help for Heroes.

Many of Mr Smith’s family members still live in the town, including his youngest daughter, Diane, and granddaughter, Amanda Harrison.

Mrs Harrison, who has a son and a daughter, said The Bowes Museum had remained one of her grandfather’s favourite places throughout his life and will be speaking about her family’s loss at the event.

Mrs Harrison, 50, is one of 13 of Mr Smith’s grandchildren, and said she felt “honoured” when Mr Clayton approached her about the song.

“I just felt quite emotional to think someone wants to write a story about our family because they fought for all of us,” she said.

“My grandfather’s story has been dubbed the real-life Saving Private Ryan and it is the true version and I have always said if it was not for the vicar’s wife we probably would not be here today.”

A spokesman for the museum added: “The Bowes Museum is honoured to be involved with this event, which is a fitting tribute to the Smith family’s terrible sacrifice.”