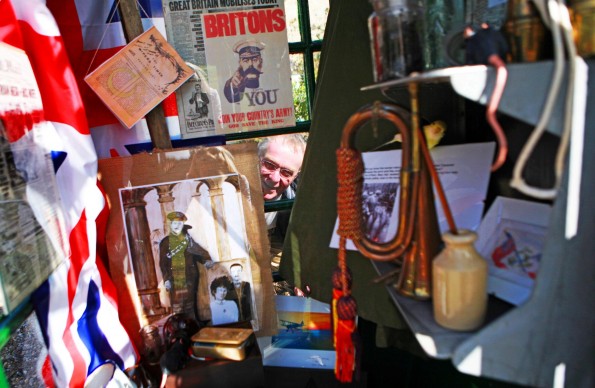 BOX EXHIBITION: The phone box which has been transformed into a First World War display. Picture: SARAH CALDECOTT

IF you’re passing through Barningham it would be easy to overlook one of the most compact commemorations of the First World War.

Nestled behind bushes in a historic green former phone box, artist John Hay has transformed what has been dubbed the world’s smallest art gallery to mark the 100th anniversary of the outbreak of the conflict.

Usually stocked by Mr Hay with acrylic paintings and charcoal drawings, The Green Room art gallery has been bedecked with a First World War theme at his wife’s suggestion, after she saw one of his paintings.

He said: “The painting was from a photo we have of my grandfather before he went to war in 1911.

“It was the picture that all of the soldiers had taken before they went off to war.” 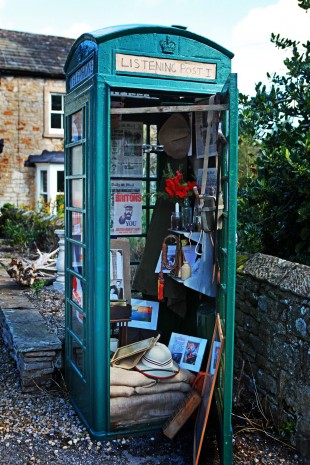 BOX EXHIBITION: The phone box which has been transformed into a First World War display. Picture: SARAH CALDECOTT

The gallery is overflowing with memorabilia relating to the conflict, ranging from sandbags and soldier bears to model rats and wreathes made from poppies.

The box, believed to be one of only five green phone boxes in the country, having been donated to the parish five years ago, features the photographs of every soldier whose name is listed on the war memorial in the village churchyard.

Mr Hay said with little floor space, enough for only one person at a time, the gallery offers a unique, individual viewing experience and a way for visitors to immerse themselves in local history.

Most of the items in the gallery, in the village between Richmond and Barnard Castle, belong to Mr Hay, who has an interest in set-building.

He has been creating exhibitions in the box since 2012, since being asked by the parish meeting to breathe new life into the former BT phone box as it could not be altered structurally.

Mr Hay said: “The phone box is a listed structure, and it’s been green since it was installed in the 1920s to avoid an urban look.

“People have stopped and commented on how good they think it is. I’ve only ever had good feedback about it.”

“The phone box looks very good and John has a real feel for the aesthetic. “This is a very good way to mark the centenary of the First World War.”