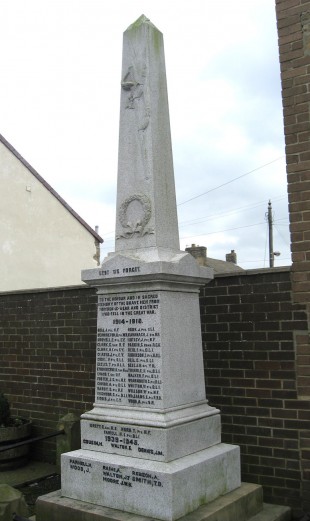 The war memorial in Howden-le-Wear

HISTORIANS have launched a two year project to research all their fellow villagers who died during the First World War.

Howden-le-Wear History Society has received £8,000 from the National Lottery to create a book about the 30 men named on the village’s war memorial.

Society members have already started to research those on the memorial and project co-ordinator Chris Gibson said they are unearthing some extraordinary stories.

He said many of the villagers who went to fight in the war ended up digging tunnels beneath enemy lines thanks to their mining background.

The Howden historians will work with Anne Yuill, who wrote a similar book detailing the histories of military men from her home village of Witton-le-Wear.

Mr Gibson said: “There is a lot of information we want to find but already we are being contacted by descendants of these men offering details and photographs.”

Every house in Howden will receive a free copy of the book with copies also going to the village school.

For more information or to pass on details of those on the war memorial, contact Mr Gibson on 01388-767470 or chris.gibson22@btinternet.com.