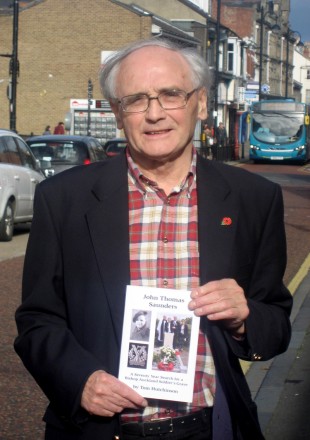 AN historian has written a new book about the search for his uncle’s grave after he was killed in the Second World War.

Lance Corporal John Thomas Saunders, of Bishop Auckland, died at a German prisoner of war camp at Lamsdorf, which is now in Poland.

His nephew, historian Tom Hutchinson managed to locate the resting place of 25-year-old L Cpl Saunders, together with a second prisoner, Trooper Henry Thomson, from Lewisham.

Both died after being shot by a guard as they worked in woodland near the camp on July 21, 1944.

The book, entitled John Thomas Saunders – A Seventy Year Search for a Bishop Auckland Soldier’s grave, details how Mr Hutchinson managed to locate the unmarked graves in Popielow Cemetery and worked with the Commonwealth War Graves Commission and the Ministry of Defence to have headstones installed, before visiting the site for a rededication ceremony.

Mr Hutchinson said: “I write local history books and in a written sense it brings this to a conclusion. I wanted to find out where he was buried and I thought why not document it in a book.”

The A5 book is available for £4, with 50p going to the Royal British Legion Poppy Appeal. It is available from a range of outlets, including Cockton Hill News, Bishop Auckland train station and the tourist information centre, all in Bishop Auckland; and the Dales Centre, Stanhope and Evenwood News.