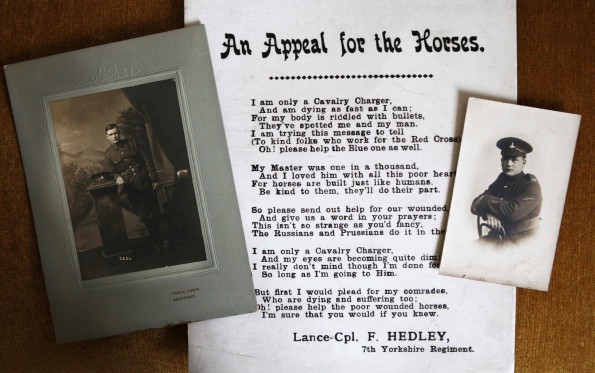 A POEM written in tribute to war horses by a First World War soldier has been passed down through generations of a North-East family.

An Appeal for the Horses was penned by Lance Corporal Francis Hedley, of the 7th Yorkshire Regiment, while stationed in France during the war.

The soldier, from the Bishop Auckland area, went missing in action but left behind the poignant poem, still treasured by his descendants.

Little is known about him, but his memory is kept alive by relatives including great-niece Maureen Blair.

Mrs Blair’s grandmother, Sarah, had refused to believe her beloved brother had been killed and – to her dying day – insisted he had merely lost his memory and was living a happy life in France.

She named her daughter Frances – Mrs Blair’s mother – in his honour and kept treasured items her brother had sent during his time abroad – including silks, postcards and the poem, which ends with the words:

I’m sure that you would, if you knew.”

Mrs Blair was bequeathed the poem, along with photographs of her great-uncle and his cap badge, when her mother died.

Now planning to hand the heirlooms down to her granddaughter Ellie, she said: “I was very moved by it and think the poem is very good..

“Having it means a lot, especially at this time of year when you get to thinking about what these men did.

“It is important to remember what they went through in the trenches.”