Tale of two soldiers who stood proudly in their communities 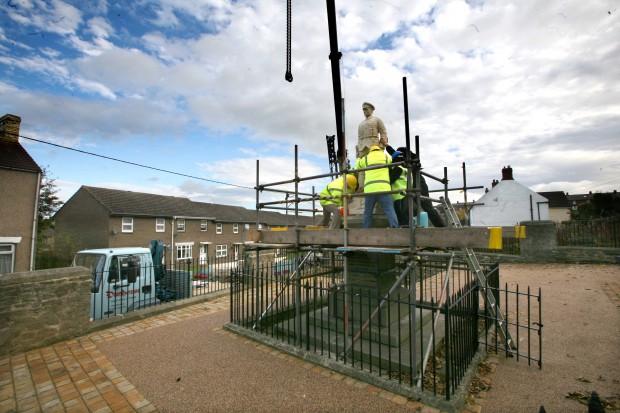 LATEST INCARNATION: The replica of the Coundon soldier arrives in 2007

THIS is a story of two stone soldiers who once stood proudly in the centres of their communities, keeping alive the memory of the real soldiers who had perished on the battlefield.

Laurence Binyon’s famous poem, For the Fallen, says: “They shall grow not old, as we that are left grow old: Age shall not weary them…”

THIS may be true of the real soldiers who never came home and whose names live on carved on the war memorials.

But it is not true of the stone soldiers who stood on top of those war memorials.

Wind and rain weathered them. Drunks and vandals wearied them. They grew old, and were taken down.

Today, one of the soldiers is still awol. Just a bare plinth marks where he once stood sentry. 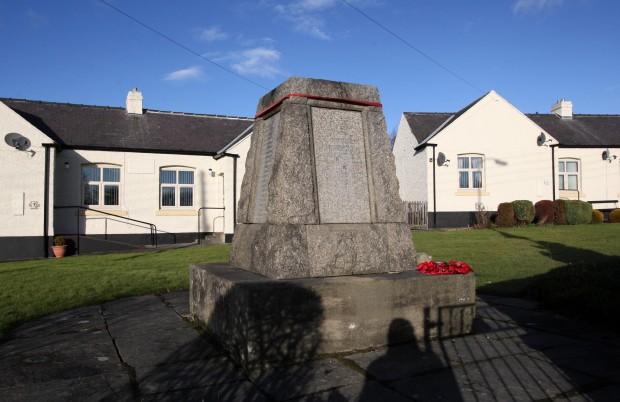 LYING EMPTY: The empty Tursdale plinth today with the aged miners’ homes behind

But the other, having spent decades in a stonemason’s yard, is now back on duty.

‘GREATLY impressive was the unveiling ceremony of the war memorial at Coundon on Saturday afternoon to the memory of the 162 officers and men of the township who fell in the war,” reported The Northern Echo on Monday, September 26, 1921. 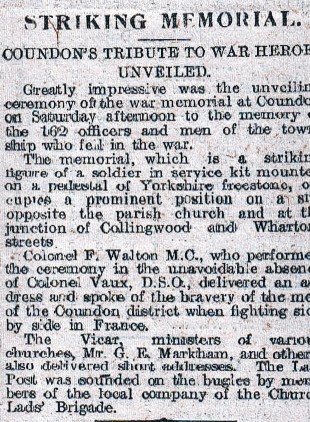 The Northern Echo’s report of the unveiling in 1921

Coundon is a mining village a couple of miles east of Bishop Auckland. Its memorial, said the Echo, was “a striking figure of a soldier in service kit mounted on a pedestal of Yorkshire freestone”.

He was unveiled by Colonel F Walton MC, “who performed the ceremony in the unavoidable absence of Colonel Vaux, DSO” (apparently there had been a bereavement in the Vaux family).

Col Walton “delivered an address and spoke of the bravery of the men of the Coundon district when fighting side by side in France”.

The soldier was probably one of several cast from the same mould.

He was made from cement with a metal inner frame.

Over time, the weather trou bled him.

The cement split; rain seeped onto the frame which rusted and his lower legs dropped off, followed by one of his hands.

After the Second World War, the old soldier was carted away to William Allison’s monumental masons in Bishop Auckland. 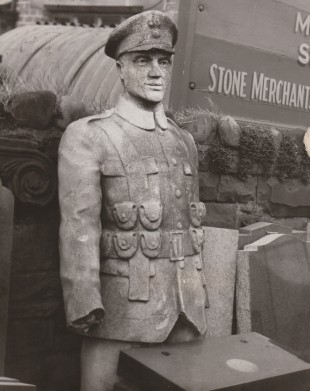 The legless and handless torso in January 1969 in the yard of stonemason William Allison in South Church Road, Bishop Auckland

For many years, legless and handless, his torso stood guard outside the South Church Road yard – last week’s Memories had a picture of him there in 1969, and lots of people have phoned to say they remember him standing there.

In 2004, Coundon resident Derek Brownbridge took pity on him and formed an SOS – Save Our Soldier – committee.

Working with the children of St Joseph’s Primary School, and their headteacher, Stefa McManners, and lots of other people, they raised £50,000 (the original statue in 1921 cost £450).

The committee commissioned a replica to be carved out of Teesdale limestone from Dunhouse quarry, near Staindrop, and it was hoisted into position ready for rededication on November 11, 2007.

Since then, the schoolchildren have planted a remembrance garden around the statue, and, on his triangle of land at the western gateway to Coundon, the soldier today splendidly remembers the sacrifice of 212 local men in the wars of the 20th Century.

And the original soldier, which was the model for the replica, still resides at Dunhouse quarry.

SEVEN miles away, six months after the Coundon memorial was unveiled in September 1921, a similar soldier started his duty in Tursdale.

He was unveiled on a plinth by Major-General Sir PS Wilkinson, KCMG, CB, of Catterick Bridge.

Just from his name, you can imagine the Major-General standing addressing the multitude in Tursdale, his chest weighed down with medals, his bushy moustache bristling under his nose and his cane tucked under his arm.

Behind him were the Aged Mineworkers War Memorial Homes, which had been opened in 1920, and beside him was the stone soldier.

He had, he said, had the honour of commanding five battalions of the Durham Light Infantry during the First World War and so “he could speak with authority as to how they fought and died”.

“There were two things he admired about them,” said the Echo in its report on March 27, 1922. “Their unfailing cheerfulness and their calm courage in the greatest danger. They were never beaten, or never shaken.”

Other North Country units were the same, and wherever they were, either in Flanders, France or Mesopotamia, they were fine fighting regiments.

“He had seen them in attack, and also in defence, and was proud to call himself a Durham man.” 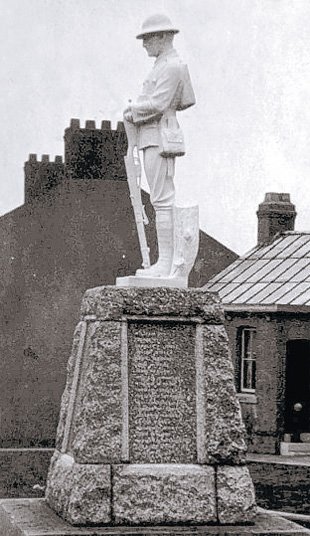 GONE AWAY: The Tursdale soldier, who has now disappeared

With the Coxhoe Silver Band playing the Dead March and Archdeacon Derry saying prayers, the Major-Colonel dedicated the soldier to the memory of those who did not return among the 219 men from Tursdale Colliery who had enlisted.

Said the Echo: “The memorial, which is in the form of a Sicilian marble figure of a soldier, six feet high, with arms reversed, erected on a rustic granite base, with polished granite inscription plates, bears the names of the 41 men who fell.” Today, the soldier is missing – absent without leave. Just his plinth remains outside the aged miners’ war memorial homes.

The North-East War Memorials Project website says: “The statue was, possibly, demolished by a drunken person, or by a car and the pieces taken to a council yard. Another report states that the head was broken off by vandals and the rest of the figure was removed for safekeeping.”

So where is he now?

Andy is researching the fate of First World War soldiers from West Cornforth, East Howle, Metal Bridge and Tursdale – so far he has more them 600 of them – and the stone soldier is obviously integral to their stories.

Even a proper picture of him would help. From the photos that survive, he appears different to the Coundon soldier: the Coundon chap, for example, is wearing a cloth military cap whereas the Tursdale Tommy is in a tin hat.

But where is he now?

If you have any information or pictures about the memorial, or any of the 41 men named on it, please get in touch with Memories (details above) or email andydenholm@gmail.com As Coundon so successfully shows, these stone soldiers can be brought back from the dead.