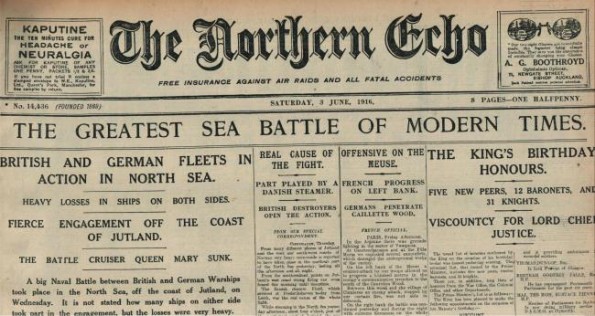 HEADLINE GRABBER: From The Northern Echo of June 3, 1916 – the first report of the Battle of Jutland

THE village of Evenwood was on tenterhooks 100 years ago. The whole country had been waiting for nearly two years for the Royal Navy – the pride of the nation – to join the war, and on May 31, 1916, at last it did.

But rather than the Battle of Jutland being the great victory and the decisive turning point in the war that everyone expected, the first intimations to reach a place like Evenwood were that it had been an unmitigated disaster. 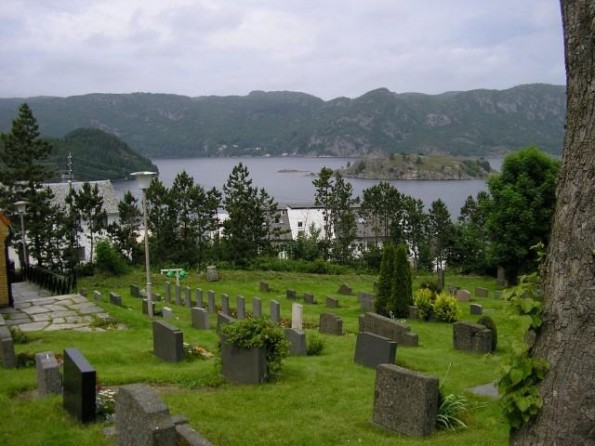 JUTLAND VICTIMS: Farsund Cemetery, Norway. This, and many of today’s other pictures, come courtesy of Kevin Richardson

“I shall never forget the sadness and depression which seemed to hang over us all on the following day, when we were given to understand that it was a severe naval set-back,” wrote the vicar, the Reverend GJ Collis, in the July edition of the parish magazine.

His gloominess was deepened by “the awful uncertainty as to the fate of three of our Navy boys who were known to have been on ships that were officially reported to have gone down”.

The three would be numbered among the 6,049 British sailors who perished. By contrast, the Germans lost ‘only’ 2,551 men which leads historians still to debate who won the Battle of Jutland.

Before the battle, Germany’s smaller navy knew it had no hope against the full might of Britain’s dreadnoughts, and so it tried to pick off small portions. The plan on May 31, 1916, was for a few German warships to taunt a squadron of British battlecruisers into following them back towards the Jutland peninsula of Denmark, where the full German fleet would be waiting.

However, British intelligence got wind of the taunting and the Grand Fleet was sent to back-up the battlecruisers.

Suddenly, by accident rather than by design, both fleets were within firing distance of one another – although in those pre-radar and pre-radar days, neither side knew what strength its opponent had beyond the range of its binoculars.

Battle commenced in the early afternoon as the German fast scouting group showed themselves before Vice-Admiral David Beatty’s battlecruisers. The battlecruisers, expecting such events, gave chase – only to find themselves in the teeth of the whole German fleet. The Germans, anticipating easy pickings from their out-numbered foe, sailed forward, and inflicted serious damage.

At 4.02pm, HMS Indefatigable was hit by shells from SMS Von der Tann and exploded – all but two of her 1,019 crew drowned. 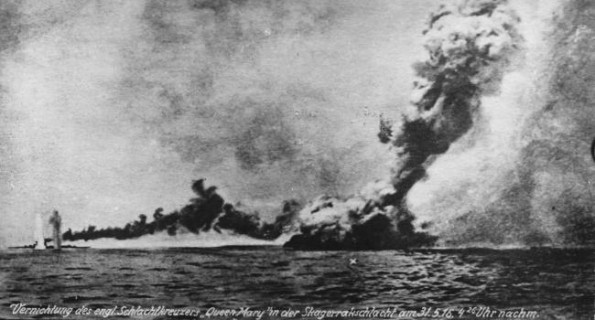 GOING DOWN: A German postcard showing the explosion of HMS Queen Mary during the Battle of Jutland

At 4.25pm, HMS Queen Mary was hit by SMS Defflinger and Seydlitz and she disintegrated – all but nine of her 1,275 crew died, including four from Darlington. And at 6.30pm, HMS Invincible sank within 90 seconds of receiving two direct hits – all but six of her 1,032 crew drowned. 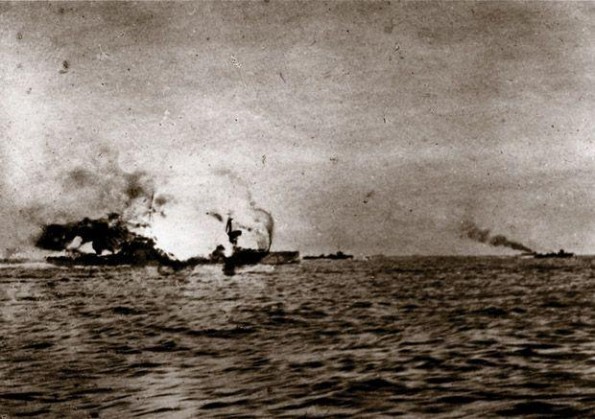 BRITISH LOSSES: HMS Invincible explodes during the Battle of Jutland – only six of her 1,032 crew members survived

But it was around this time that it dawned on the Germans that they were, in fact, facing the full majesty of the British fleet, and they could not hope to win. So they retreated – an expert manoeuvre until four German battlecruisers suicidally turned into the path of 18 British vessels and within minutes sustained 37 heavy hits.

Night fell at about 9pm, but didn’t stop the fighting. It only increased the confusion, as the fate of HMS Black Prince shows.

DOOMED CRUISER: Two men from Evenwood, and two from Darlington, were about HMS Black Prince when it sank at the Battle of Jutland

The armoured cruiser became separated from the British fleet sometime before 6pm, and then, badly damaged, blundered around the sea, burning, out of control. A few minutes before midnight, she strayed for a final time into the path of the enemy fleet. She was so close, the German attackers could see their British counterparts running around in terror on the deck. Three enemy warships opened up, and Black Prince exploded, killing all of her 857 crew members.

Among them was Able Seaman John Wren, 23. Before the war, he was a pitman, living in West Auckland, but his wife, Elizabeth, came from Evenwood and the parish church was where he worshipped.

Indeed, shortly after he’d enlisted in May 1915, he’d sent a letter to the Evenwood parish magazine from Black Prince, saying: “Navy life is grand, but it is tiresome waiting so long for the German fleet coming out.” 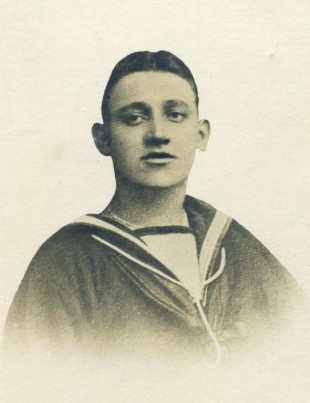 FOOTBALL CAPTAIN: Andrew Lynas, of Evenwood, who died at Jutland on HMS Ardent

Wren’s name was joined on the Evenwood war memorials by those of Ordinary Seaman Andrew Lynas, 20, and Ordinary Seaman William Carrick, 22, who had enlisted together on September 7, 1915, and who died together in the early hours of June 1, 1916, when their destroyer, HMS Ardent, sank.

“The exploits of this little vessel in the big battle were in accordance with the very highest traditions of the British Navy,” wrote the vicar. “She and her wonderful crew will never be forgotten in the pages of history. She is said to have sunk a huge German warship many times her own size, and was in the thick of the fight until she disappeared, literally knocked to pieces.

“The two lads were with us only a week or so before the battle, looking hearty and well.

“William Carrick was a member of our parish church choir, and a very useful and popular member too.

“Andrew Lynas I remember chiefly as a bright and very promising lad at school. He was one of the mainstays of that exceedingly smart little football team in which Mr Bouch used to take such an interest and which distinguished itself so greatly in the schools competition a few years ago. I believe he was captain.” 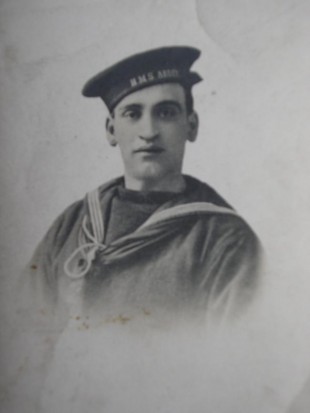 ON ARDENT: William Carrick, who grew up at the Bridge Inn at Ramshaw, and died during the Battle of Jutland

Carrick is the only one of the three who has a known resting place. His body was washed up on the coast of Norway some days later, and he was buried there with eight fellow victims.

One of the Evenwood lads who had survived the battle, Arthur Dunn on HMS Birkenhead, which had been alongside Invincible when she exploded, also sent a letter to the vicar for the July 1916 magazine.

“I shall never forget the brilliant flashes and crashing of guns caused by our ships firing salvos or broadsides,” he wrote. “One peculiar scene was the thousands of fishes floating on the water. They were of all kinds and sizes. I think they must have been stunned by the turmoil in the sea caused by the falling shells.”

He said: “I don’t suppose any good news will have been heard of my three friends, seeing that their ships were sunk.”

But he added: “Everybody who took part in the battle feels very certain that the whole of the German losses have not been published yet, and when they are, it will be a surprise for you all.”

He was right. The Germans had declared a national holiday on June 2 to celebrate their victory, but a few days later, word seeped out that a further three of their ships had been so badly damaged that they had been scuttled.

This meant that the final score in the battle was not as one-sided as the British first feared, although both the figures of the lost men and tonnage of shipping – the Germans lost 62,000 tons and the British 113,000 tons – still suggests a German victory.

So nowadays the Battle of Jutland is considered, if anything, a slight British victory – the enemy had been seen off.

Mr Collis conducted a memorial service on June 11 in St Paul’s Church. “People came from far and near to do honour to the lads,” he wrote. “Every form and chair that we could borrow was instantly appropriated. Every available inch of standing room was occupied, and very many who could not get into the building took what part they could in the enclosure outside.

“We shall never forget the service, nor the brave gallant ones whom we commemorated.

“I doubt if our dear church will ever see a nobler day or a greater occasion.”

With many thanks to Kevin Richardson, whose website thefallenservicemenofsouthwestcountydurham.com contains more information about the three lads who died at Jutland along with the stories of the men from St Helen’s Auckland through to Butterknowle and Woodland whose names appear on local memorials.

AT least 150 men from the North-East died at the Battle of Jutland – the searchable database on The Northern Echo’s special website, thenortheastatwar.co.uk, shows the names of ten Darlington men who were lost.

Other names that stand out include Captain Charles Fitzgerald Sowerby, of Snow Hall, near Gainford, who was nearly 50 and in command of the battlecruiser HMS Indefatigable when it sank.

Also on Indefatigable was Midshipman William Nicholas Eden, who was 16. His home address was Windlestone Hall, Rushyford, and his elder brother, Anthony, became prime minister during the 1950s.