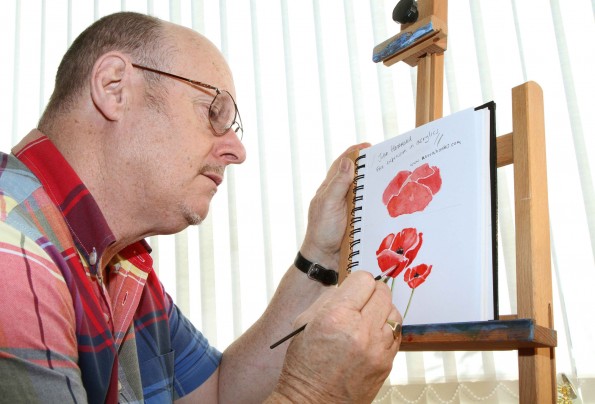 FINE DETAIL: Artist Malcolm MacDonald at work on the poppy painting for the front cover of a book of children’s war poems. Picture: RICHARD DOUGHTY

AN injured Armed Forces veteran has risen to a challenge set by The Northern Echo to produce a work of art for today’s Remembrance Sunday special edition.

World-famous artist Mackenzie Thorpe has produced a masterful work of art to serve as the cover for this special edition – and, similarly, the Phoenix House art students were also asked to come up with a painting to feature in the commemorative edition of the paper.

The three poppies in his painting symbolise the three branches of the military that were involved in the war, the size of each force, and the number of deaths that each suffered.

Malcolm, 60, explained: “In 1914, the Royal Flying Corps deployed four squadrons to France with 12 aircraft each. Together with aircraft in depots, this gave a total strength of 63 aircraft, supported by 900 men. By the time of the first major actions at the first Battle of the Somme, in July 1916, there were 27 squadrons with 421 aircraft.

“However, the force only really began to evolve in April 1915 and, even then, was thought of more as a reconnaissance service than a fighting force. That’s why one of the poppies is a bud, yet to flower – just as the RFC was at the time.

“The medium-sized poppy represents the Royal Navy, and the largest one is the Army, with 886,000-plus men and women lost in only four years.”

During his eight-year career in the RAF police force, Malcolm, who lives in Scarborough, endured a number of traumas, including being taken hostage, witnessing a double aircraft crash and having his vehicle shot at. He left the RAF in 1980 but suffered panic attacks and flashbacks and was eventually diagnosed with PTSD.

He studied for a degree in fine art and is grateful for the respite care he receives from Phoenix House.

“When I paint, I am in a different world,” he said.

It is hoped that Malcolm’s poppy painting will be used as the cover of a publication featuring entries from schoolchildren in the Echo’s war poems competition on pages 22 and 23.