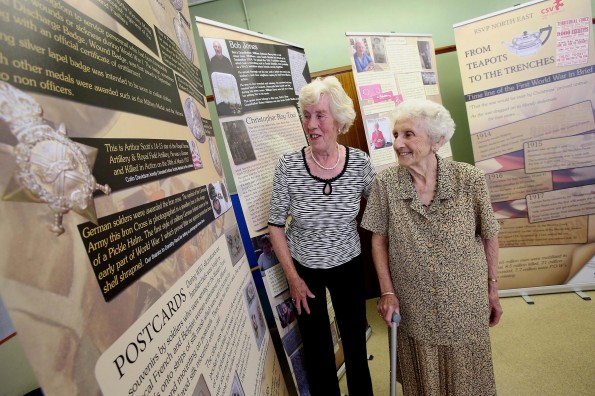 A POP-up exhibition dedicated to the soldiers of the Durham Light Infantry who served in WW1 has opened to mark the conflict’s centenary.

It brings together photographs, letters, keepsakes, uniforms and medals, reflecting the North-East’s heritage and the human cost of war.

CSV’s Ashleigh Gibson, who led the project, said: “This exhibition helps us remember all the brave soldiers from Durham and the North-East who sacrificed so much.

“We’ve been sent a host of amazing artefacts, including a letter related to William Johnson Berry who served in the 10th Yorkshire Regiment which was brought in by his grandson. William’s mother was sent a letter about his death which we have in the exhibition, but William had only been wounded and was missing not dead.

“Luckily he was found and sent to a hospital in Newcastle and his family were dramatically informed that he was actually alive and well and that the letter was a mistake.

“It’s stories like this which bring this exhibition alive and we hope that everyone will come along and share these memories and learn about our history.”

It was supported by a £9,700 Heritage Lottery Grant for centenary commemorations.

It is open until Thursday (July 31) and will eventually become a permanent community resource for libraries and community groups.