Walking in the footsteps of a Flanders hero 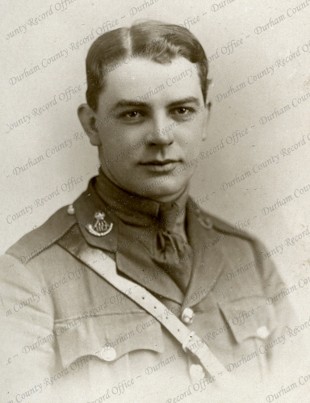 HIS STORY: Lt TM Fletcher, who was killed at the Battle of Passchendaele. Picture courtesy of the Durham County Record Office D/DLI 2/20/5(74)

FOR the Durhams, the Battle of Passchendaele began at 3.50am on July 31, 1917, when the buglers sent the 20th Battalion over the top into the Flanders mud.

The men made good progress until a row of German pillboxes opened up a barrage so intense that only messages carried by pigeons could be sent out calling for reinforcements. It wasn’t until nightfall, after seeing off two counterattacks in torrential rain, that the Wearside battalion was relieved.

It then dropped back to lick its wounds, count its dead – 431 either killed, wounded or missing – and record its stories.

“Lt TM Fletcher was wounded before zero hour, but returned with a bandaged head to lead his company until he was killed,” wrote Captain Wilfrid Miles in his 1920 history of the DLI.

The centenary of Passchendaele is the big anniversary of 2017, and many families have such snatches of halfremembered stories. But how can they find out if they are true?

“No one now has a living relation who served in the First World War, so everything is at least second-hand,” says Gill Parkes, principal archivist at the Durham County Record Office. “The first thing to do is to check what you’ve got at home or in the family somewhere.”

Because our lieutenant had been killed, the Commonwealth War Graves website provided a few more details: he was Thomas May Fletcher, 28, whose parents lived at Sunnyhurst, Highfield, Chester-le-Street.

He won a Military Cross, and his name is on the Menin Gate, at Ypres, which means his body was never recovered.

Armed with this information, we arrived at the record office.

Now we need to put these boring dates into context – regimental diaries show where the battalion was located, which gives us a picture of what Thomas himself was up to.

“We can get a military professional to do the research and interpret it at £32-perhour, but many people just love spending their time trawling through records and doing it themselves,” says Gill. 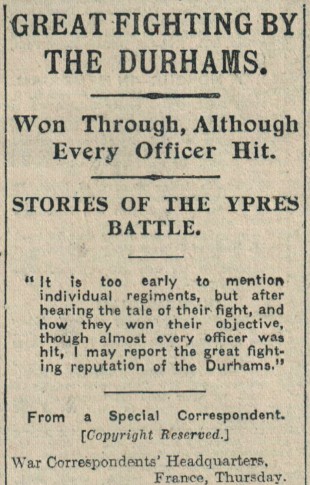 BATTLE REPORT: How The Northern Echo of August 3, 1917, reported the battle in which Sgt TM Fletcher was killed. Six days later, the Echo carried a line saying Fletcher, who worked as a railway clerk in Newcastle, had been injured

An expert eye would immediately spot September 16, 1916 – the date Thomas sustained his first injury. This was the Durhams’ deadliest day of the war – 412 killed in 24 hours of the Battle of the Somme. Thomas was hit near the Pommiers Redoubt, fighting to capture the village of Montauban.

And “gazetted” refers to the day when the London Gazette announced that he had been awarded an MC. The Gazette – the official record – is online, and Gill is able to call up his citation.

“For conspicuous gallantry and devotion to duty,” it reads. “Although wounded in the head on the way to the assembly area, he returned to his company after being dressed, in time to lead them to the attack. This he did with great gallantry until wounded a second time, gaining both objectives and setting a splendid example of fearlessness and energy to his men.”

Then Gill puts the icing on the cake. “The 20th was a Pals battalions, and the Pals, because of their nature, were better recorded than other battalions,” she says.

“We have an album of 20th photographs and someone has even taken the trouble to write nearly all the names underneath.”

And there is Lt TM Fletcher, killed 100 years ago this summer, staring back out of the page.

The research could end at this point, or it could go on for years, into newspaper archives, into his railway background, into the memorials which might bear his name, and to the Somme and then the Menin Gate, at Ypres, to follow in his footsteps.

“It is all about trying to pull bits of information together,” says Gill. “You need to have an investigative mind, to be the sort of person who likes puzzles and has the ability to think laterally to where you might find the next piece of information.”