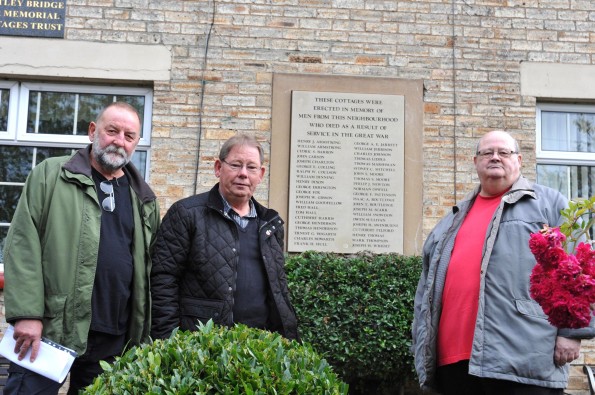 THE names of 15 men who lost their lives as a result of the First World War have been added to a village memorial to mark the centenary of the conflict.

Researchers have finally traced details of local men missing from the memorial in Shotley Bridge and added them to the roll of honour of 27 men on the original plaque installed at the end of the war.

The new plaque will be officially dedicated during the annual Armistice Service held at Shotley Bridge War Memorial Cottages on Sunday, November 9.

It follows a year-long research project by local historians Dave Wright and Ian Patterson, who painstakingly cross-referenced the names recorded at nearby St Cuthbert’s Church and trawled through an unpublished archive of parish magazines dating back to the war to trace servicemen missed off the original memorial.

The original plaque, paid for by public subscription, was compiled at the end of the war and installed on the wall of the village’s three memorial cottages, built to provide homes for the families of ex-servicemen.

The then vicar of St Cuthbert’s appealed for families to submit the names of their relatives to be included on the memorial, but not all came forward meaning that many of those who paid the ultimate sacrifice for their country went unrecorded.

“We naively thought the names inscribed on the numerous memorials and plaques of the parish were a definitive record of those who lost their lives. Sadly this was not the complete picture.

“After the war many of the plaques were erected in relative haste, inviting bereaved relatives on a voluntary basis to submit names of loved ones who had been killed”.

In some cases, families had left the neighbourhood or simply did not come forward. In others, the servicemen may not have died in active service at the Front, but gave their lives in the cause nonetheless.

Among the names now honoured are Joseph Michael Scarr, from Benfieldside Road, who died in July 1916 aged 20 in a training ground accident in Edinburgh.

Others missed off include the Routledge brothers, 34-year-old John and 21-year-old Isaac, from Cutler’s Hall Road who died within three months of each other in 1918, but whose surname was misspelled in official records.

The last name included is Private Joseph Henry Wright, a steelworker in his late 30s when he joined the Army in the first weeks of the war. Due to his age and profession, he was posted to carry out war work at a Tyneside steelworks where he contracted tuberculosis and died, aged 44, in October 1921, after the cut off point for the original memorial.

Mr Patterson said: “Some of them weren’t recorded anywhere – they have made that sacrifice and that should really be recorded.”