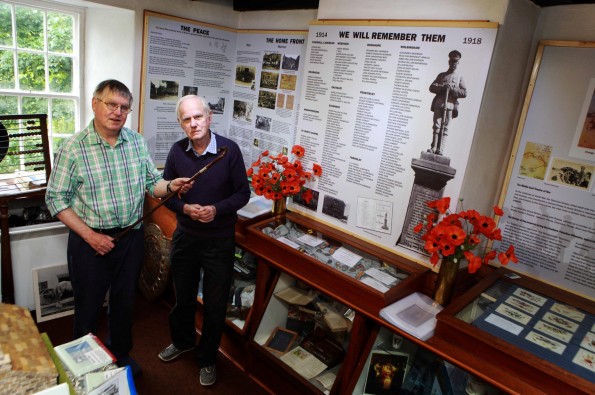 : David and Ken Heatherington pictured with the WW1 Exhibition at the Weardale Museum at Ireshopeburn

ONE of the region’s smallest museums is hoping to make a big impact with its latest exhibition – a moving tribute to the heroes of the First World War.

Earlier this year, The Weardale Museum, at Ireshopeburn in Upper Weardale, County Durham, appealed to dales folk, past and present, for photographs, stories and memorabilia relating to the Great War.

For more on the North-East’s role in the Great War and to search our database of WWI soldiers from the region, visit our centenary website – thenortheastatwar.co.uk
And this week the fruits of its search went on display at the popular tourist attraction.

As well as listing the names of almost 180 Weardale men who died in the 1914-1918 war, the exhibition features letters from soldiers serving in the trenches, medals and rare silk postcards, made by French and Belgian refugees and sent home by British troops.

An ornate walking stick, belonging to John William Featherstone, from Lanehead in Upper Weardale, can also be seen. 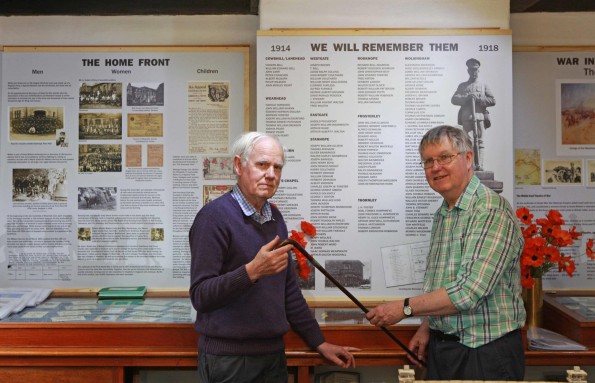 David Heatherington, museum curator, said: “All the serving soldiers from Lanehead who returned from the war were presented with an inscribed walking stick. The parishioners all clubbed together to organise this.

“The exhibition started with the silk postcards. They inspired us to appeal for more memorabilia. It is not too late for us to add to the display and we would be delighted to hear from anyone with stories and memorabilia they would like included.”

Ken Heatherington, a trustee of the volunteer-run museum, added: “We have a big genealogy section here and have included information about those listed on the war memorial in the display.

“When most of us look at a war memorial we see a list of names. We wanted to find out about each individual to ensure they are never forgotten.”