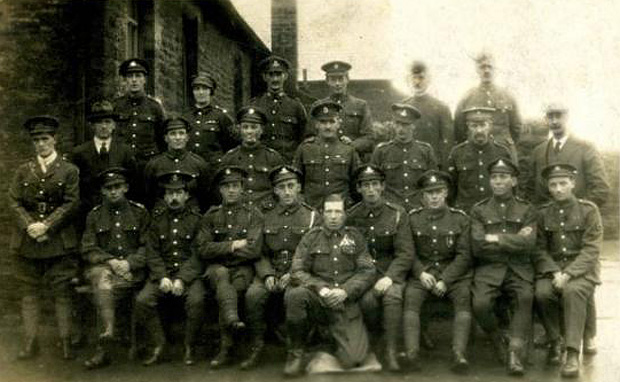 First World War soldiers lined up outside Westgate School in 1916

A photograph of soldiers lined up at Westgate during the First World War has turned up, much to the delight of village hall officials.

They will be able to put it on show when their large war memorial clock is put back in place to mark next year’s centenary of the start of the conflict. It has been loaned by George and Pat Fairless, who live in Westgate.

The back row is thought to include Dixon Coulthard, Albert Gowland, Joe Lee and Mr Manley. The woman second from left is Lena Moore but she and Mr Manley, who later became head teacher of Westgate School, are not named on the village’s roll of honour. It is felt the roll might be incomplete.

Among those in the next row are Septimus Parker, Em Moses, Willie Morley, John Potts, Jos Dalkin and Slater Freeman. The front row includes Tommy Elliott, James Elliott, Ralph Lowes, Vince Parker, George William Nattrass and John W. Walton. Peter Nattrass, treasurer of the village hall, says there is doubt about some of the names, and some men have not been identified so far.

He and David Heatherington, the hall chairman, hope Northern Echo readers may be able to correct any names that are wrong, and fill in those that are missing.

Were some of the men home on leave from the battlefields when the picture was taken and were some about to go to the trenches for the first time? Any answers will be welcome.

There is a question mark over Ralph Lowes, who is a little ahead of the others in the front row.

He is shown here as a sergeant, but is named on the roll of honour as a private.

The location of the photograph is known to be Westgate School. None of those named so far were among the 13 who lost their lives in the war. Good progress is being made in raising money to pay over £10,000 for repairs to the clock.

If you know anyone in the picture, contact chris.lloyd@nne.co.uk