A case of heartbreak 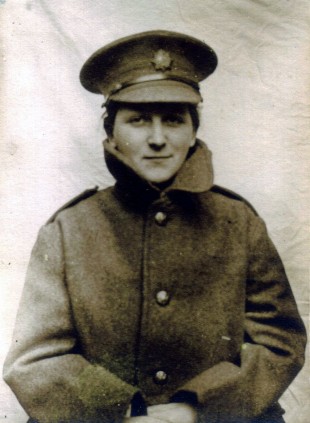 Dora is enveloped in a huge army greatcoat. It is buttoned up to her neck, its enormous collars flapping around her ears, the epaulettes sloping off her slender shoulders, and the long sleeves scrunched up around her elbows so that her hands are free.

SHE peers out from beneath an oversize army peaked cap and smiles slightly at the camera. It is a smile every bit as enigmatic as that of the Mona Lisa.

Dora, who was 20 when the picture was taken in 1918, certainly does not look unhappy.

After all, the man taking the photo is the man to whom she has given her heart. He was the boy from just around the corner who went away to war. She’s clad in his khaki for the picture as they’ve come to an arrangement about their future: when the war is over, he’ll return to Darlington and marry her.

But for now, they’ve only got a few hours of his leave together. Dressed in his war uniform, she knows he must soon return to the front – and he may never come back. That must be why her smile is not bursting out all over her face: her present happiness must give way to months of worry.

And he never did come back.

About six months after the photo was taken, and less than one month before the First World War ended, 2nd Lieutenant Joseph William Booth died of wounds caused by shellfire.

“He was never spoken about in our house, but my sister and I were always aware of a small leather suitcase kept in our parents’ bedroom which contained some letters,” says Dora’s daughter. “Not until she died did we discover the significance of what she kept.”

The small suitcase contains mementos of a love affair blown a part by the war – mementos that are now on display in Darlington library.

Using the library’s resources and photos, we can piece the story back together. 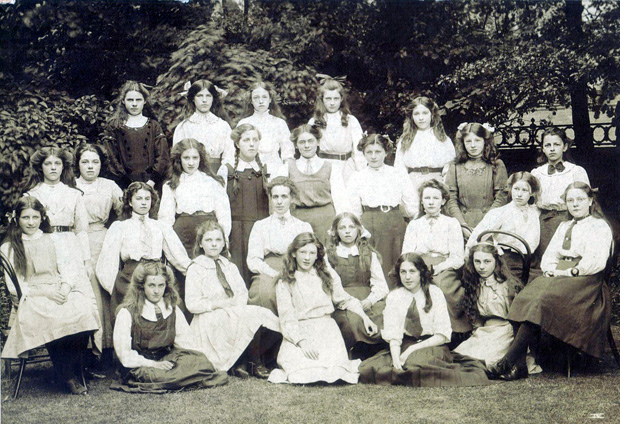 SCHOOL DAYS: Dora, with long hair, is seated on the left of the second row in this picture from Darlington Girls High School. Below, Dora kept 2nd Lt A Jones’ envelope sent from the front line

The 1911 census tells us that the Harry and Lucy Booth hailed from Halifax, where their only child, Joseph, was born on August 2, 1897. They moved to Darlington’s Nelson Terrace, in the shadow of Bank Top station, and Harry worked as a “botanical brewer” and drayman.

(A botanical brewer fermented soft drinks from herbs, roots and fruits, like ginger beer and lemonade.) Joseph was a bright lad and won a Chapman Ward scholarship to the grammar school, now the sixth form college in Vane Terrace, and clearly enjoyed cricket.

Nearer the station, in Windsor Terrace – now part of Park Lane – lived Dora Richmond and her family. She was born less than four months after Joe, on November 27, 1897, and her father, James, had a sweet and pickle business on Borough Road. 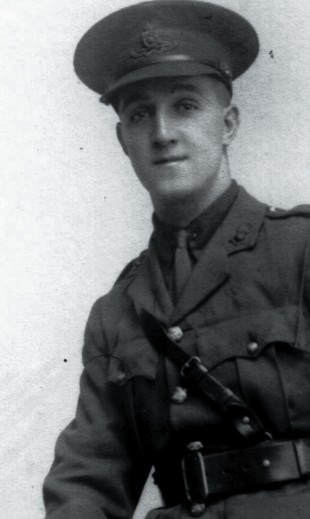 STRIKE A POSE: Lt Joseph Booth of the Royal Field Artillery. This artful picture was taken by photographer Sydney Wood, probably in his studios beneath the clock in Blackwellgate, Darlington

JOE left school in July 1914. Did he notice that, a few days earlier on June 28, Archduke Franz Ferdinand had been assassinated in Sarajevo, Bosnia, lighting the touchpaper of the First World War?

Joe harboured ambitions of becoming a teacher and took the first steps to becoming a pupil teacher but in Dora’s suitcase is a beige newspaper cutting saying that, as a member of the Darlington Voluneteer Corps, he and four friends had joined up.

JOE joined the Scottish Horse Brigade and started on horseback guarding the east coast. In 1917, he obtained a commission in the Royal Field Artillery and went to the Western Front in France.

“By 1917, they had an understanding,” says Dora’s daughter. “They did not become engaged but Joe gave Dora a gold brooch as a keepsake until the end of the war when they would marry.”

In late 1917, Joe survived the Battle of Cambrai. This battle, in which about 45,000 men on each side were either killed or wounded, is noted as an early tank engagement, but really it was the heavy guns that men like Joe deployed that enabled the British to call it a victory.

Perhaps it was on leave following Cambrai that Joe and his girl, a century before the “selfie”, messed around with the camera.

Then it was back to the front. 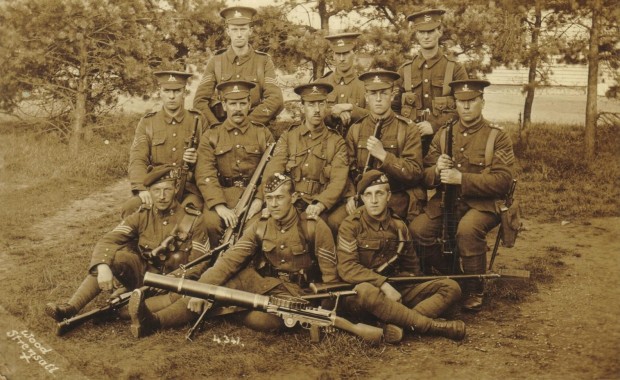 The Royal Field Artillery barely moved at all during 1918, and come the start of October, Joe was in B Battery of the 93rd Brigade at Cantaing to the south-east of Cambrai.

The month began with the brigade sending over “vigorous harassing fire” of the German trenches. 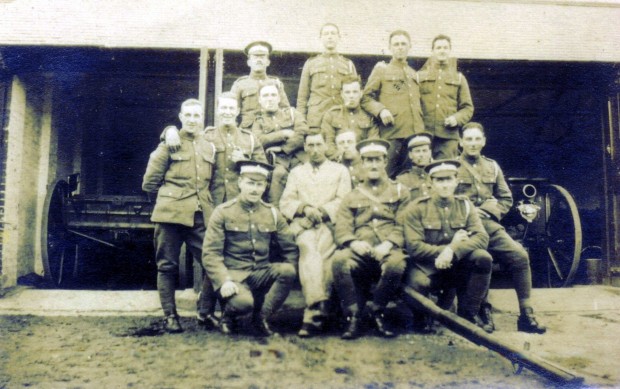 LOST IMAGE: A battered little picture in Dora’s suitcase shows Joe on the left of the middle row of this artillery battery

On October 8, the British infantrymen launched an attack, supported by a ferocious bombardment from the artillery.

“Attack is very successful and all objectives are gained,” reported the regimental diary. 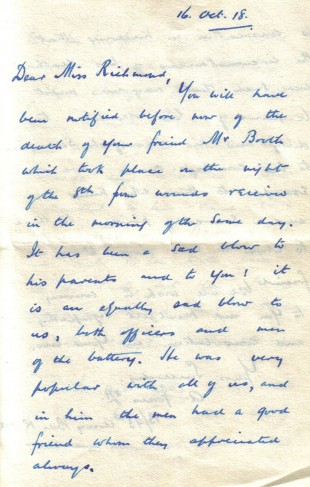 Five artillery members had received injuries, one of whom was Joe. He had been struck while returning from patrol that morning. He died that evening. He was aged just 21.

Dora, who wasn’t even engaged, wouldn’t have received official communications regarding the tragedy, but she did get a letter from one of Joe’s friends, 2nd Lieutenant A Jones.

Addressed to Miss Richmond, it was written eight days after Joe’s death in flowing blue ink. “You will have been notified before now of the death of your friend Mr Booth,” it begins. “It has been a sad blow to his parents and to you! It is an equally sad blow to us, both officers and men of the battery.

“He was very popular with all of us, and in him the men had a good friend whom they appreciated always.

“We, his fellow officers, shall always cherish the memory of his cheerful personality and kind nature. There was never any doubt of his ability and courage and whatever was entrusted to his care was well carried out.”

IT must have been an extremely difficult letter for 2nd Lt Jones to write. He didn’t have to do it – he wasn’t Joe’s commanding officer – but he must have felt compelled by loyalty to his friend.

He must also have known of the very special place Dora had in Joe’s heart. 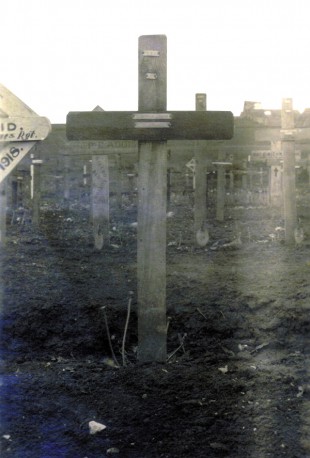 MARK OF RESPECT: A wooden cross marks Joe’s resting place in Anneux cemetery near Cambrai in northern France. The cross was later replaced by a proper stone

2nd Lt Jones concluded: “In spite of the sorrow that you will feel from the loss of such an admirable friend, there is consolation in knowing that the circumstances of his death were such that anyone might be proud of: his devotion to duty and his unselfish sacrifice to his country’s cause are an example to those who knew him and a source of pride to those to whom he was more than a friend.

“We all wish to convey to you our heartfelt sympathy and consolation in your loss.”

Dora placed the letter back in its envelope and put it in her suitcase, along with newspaper cuttings announcing Joe’s death, his cap badges and pins, and a few photos he had sent her from the front. Plus, of course, the picture of her engulfed by his greatcoat.

She was, perhaps, fortunate that she did find love again.

She married in 1925, had two daughters and a happy life – but kept her memories buried under the bed.