Foreign fields an eye-opener for 27 cadets

IT was a chance to get away from home at the height of summer, but for the 27 cadets who took part, it was anything but a holiday. 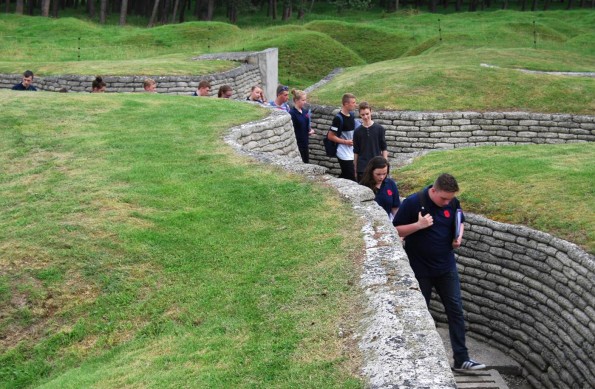 TWENTY-SEVEN teenagers from 405 (Darlington), 1869 (Middlesbrough) and 2394 (East Cleveland) squadrons could have had little idea what lay ahead of them when, one balmy Saturday evening in July when they boarded their coach at the start of their trip.

What followed was a packed schedule of trips to French and Belgian battlefields and memorials, including Vimy Ridge, the Somme 1916 Museum in Albert, Meharicourt Communal Cemetery and Thiepval Memorial to the Missing, which records the names of the 72,000 fallen British soldiers whose bodies were never found.

Memorial wreaths were laid , with due solemnity and ceremony, at each location the cadets visited. At Meharicourt, the cadet band played at a memorial ceremony to commemorate the 70th anniversary of the loss of Canadian airman Andrew Mynarski VC.

Mynarski, who flew missions from RAF Goosepool, near Darlington, what is now Durham Tees Valley Airport, was shot down in June 1944. He was awarded the Victoria Cross for gallantry after trying to save his crewmate when their plane took enemy fire.

One of the most nerve-wracking moments of the tour for two of the cadets came during a ceremony at the Menin Gate, in Ypres. The band played for a crowd of about 2,000 people, before Cadet Sergeants Luke Devey and Sean Brown, from Darlington, took centre stage with their solos on the bugle and drums respectively. 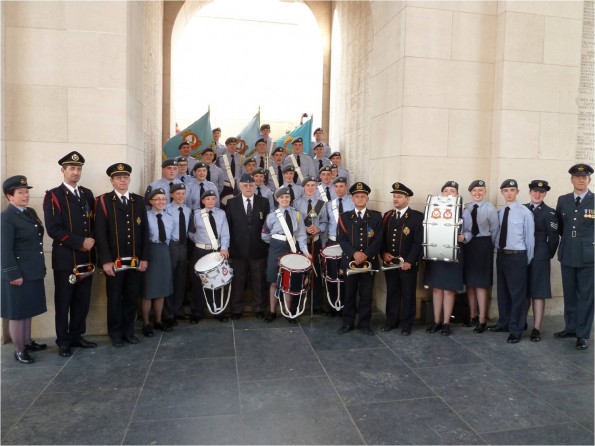 ALL TOGETHER: The cadets, with commanding officer Flt Lt Rachel Mason, far left, at the Menin Gate

Back at base in Darlington, the dust having settled on the trip, the teenagers reflected on their experience at the Menin Gate, where almost 55,000 fallen are commemorated.

Cdt Sgt Devey, 17, played a piece known as Highland Cathedral during his moment in the spotlight.

He said: “The Menin Gate was surreal – knowing I was going to perform a solo, but not knowing how many people were going to be there. It was something I will never forget.”

Cdt Sgt Brown, 18, was struck by the scale of the memorial.

He said: “Everyone said it was a bit of a shock how many names were there.

“Some of the graves we saw belonged to soldiers who were just a couple of years older than the other cadets. Some were my age.”

Civilian instructor Steve Brown, who organised the trip and is a veteran of 23 years’ military service, said: “The whole band joined in [with the two soloists] and the sound was the best I have ever heard them play.

“All the staff were very proud to be with the cadets that evening.

“They were just exceptional, it was a very emotional evening for all and a job well done by the Band Master , civilian instructor Brian Mussard.” 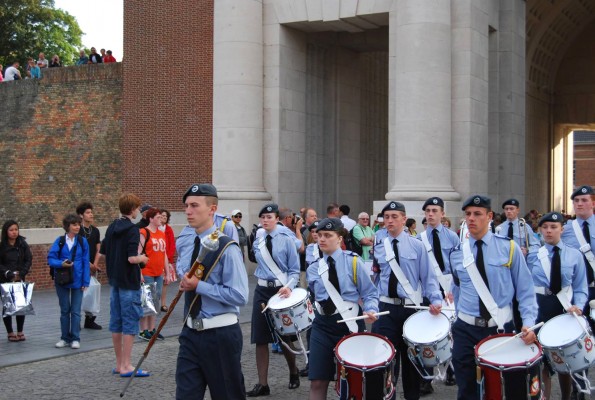 MENIN GATE: The cadet band on parade during the Last Post ceremony at the Menin Gate

The trip received funding from the Heritage Lottery Fund (HLF) and Darlington Borough Council, as well as other donations towards the overall cost of £14,000.

It was the start of a series of projects the cadets will be undertaking over the next four years, during the commemoration of the First World War centenary. A grant of £6,000 from the HLF ‘then and now’ project meant the organisers of the five-night trip were able to keep the cost per cadet down to just £200.

Anyone who has visited the Somme, Ypres, or any First World War memorial for that matter, will know that such trips can stir incredibly strong emotions.

This case is no different and The memories of both cadets and staff are studded with anecdotes showcasing the best of human nature.

Mr Brown tells a tale of the group’s coach driver going ‘above and beyond’, running to move his bus so the cadets had somewhere to get changed after a last-minute change of plans. Thanks to his efforts, the group arrived at their destination, all present and correct, with a full two minutes to spare.

Following a wreath-laying ceremony at the Lochnagar Crater, a French woman approached one of the group’s adult chaperones and asked to take photographs of the group, so she could show people in her village how British teenagers pay tribute to those who fell in the Great War.

Flight Lieutenant Rachel Mason, is commanding officer of 405 Squadron, Air Training Corps, which is based at Bradford Armoury, in Darlington’s Neasham Road, said She said field trips such as this are an essential tool in helping to capture the imaginations of this generation of cadets, as well as those in the future.

Flt Lt Mason said: “Being there in the field, walking in the footsteps of those men who fell, brings it home a lot more than reading about it in a book.

“It is important, to a lot of them it is just history, so – it is up to us to make them see that it’s a really big thing. It hit a lot of them when we were out there. We went to Vimy Ridge first and you could see their eyes widen.”

One of the last engagements on the tour was a stop in Amiens, which is twinned with Darlington. A civic reception was laid on and , in return, the band performed for the townsfolk.

As a memento, Every cadet who on the trip was presented with a blue cornflower lapel badge – known as the bleuet de France, they are the French equivalent of the traditional Remembrance poppies.

The cadets have wasted no time building on the memories of their time spent walking in Flanders fields, with a series of presentations to parents and other interested parties, such as Royal British Legion members.

Next on the agenda for the cadets’ First World War commemoration studies will be a project that aims to find out more details about 55 North-East men whose names are contained in a book found by Flt Lt Mason in the Centre for Local Studies at Darlington library.

The cadets’ research, to which will be completed over the next four years, will eventually be made available for library visitors to study.

There may also be, in the pipeline, another trip to the continent, for the commemoration of the Battle of the Somme centenary, in July 2016, but that’s very much a story for another day.