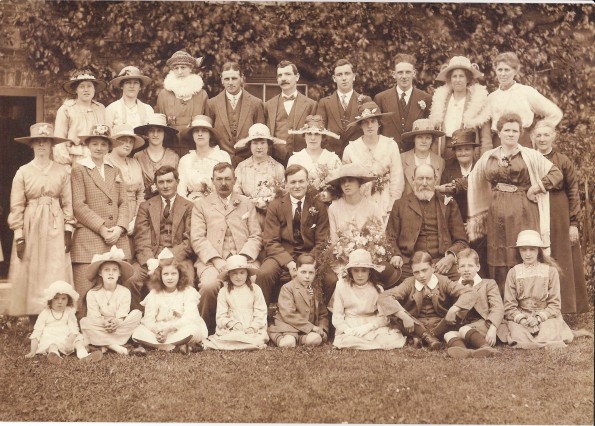 FAMILY WEDDING: A magnificent picture taken at Cargott Farm, Great Burdon, near Haughton-le-Skerne, on June 1, 1921, showing the wedding of Thirkell Dougill and Annie Blair – the happy couple are at the centre of the first seated row. Third from the right on the back row is Thomas Bamlett, who was shot through the neck in the First World War. Next to him is his mother, who lost two of her other sons in the war

WHEN residents of one village gathered to unveil their memorial to the First World War, the priest had a powerful message for them.

With their new war memorial shrouded in a large Union Jack, the villagers of Haughton-le-Skerne crowded round to see it unveiled.

“It stands boldly on a grass plot near the parish church,” said the Darlington and Stockton Times, “and is a distinct credit to the parishes responsible for its erection.”

Haughton is east of Darlington, and the parish rector, the Reverend JC Fellowes, presided over the unveiling on October 7, 1920. 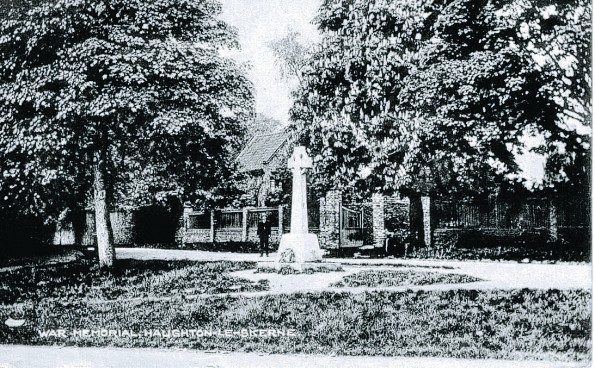 NEW MEMORIAL: Haughton’s runic cross shortly after its unveiling on October 20, 1920. It has since been turned by 45 degrees

He said: “The memorial is not for those of us who have lived through the Great War as we are not likely to forget the patriotism and devotion of those who have died for the safety of their land. Rather the memorial is for the children, who are now growing up, and their children. I trust the memorial will inspire those who follow, with the determination to sacrifice all for the sake of their country and all mankind.”

Nearly 100 years on, the memorial is still inspiring the villagers, and next Saturday, at 10am, Neil Wastell will give a talk called Remembering Haughton’s Fallen, in the church. Although the talk is free, donations made be made to the British Legion.

Although the memorial bears 18 names and a brass plaque inside the church has another nine, Neil and Carol Atkinson, of the Haughton Local History Society, have researched the stories of 32 local men who made the ultimate sacrifice.

The way into the church will be lined with 32 crosses and everyone attending will be given a hand-knitted poppy to wear during the talk.

At the end, Martin Smith will play the Last Post, partly in memory of his grandfather, Lance Cpl John Robinson, who won the Military Medal and survived the war. 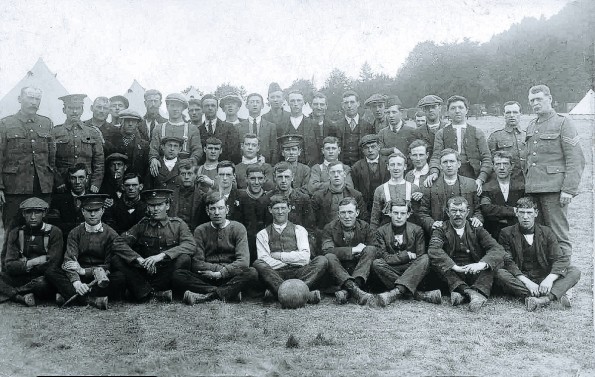 ON THE BALL: The Northumberland Fusiliers, with Lance Cpl John Robinson on the third seated row from the front, third from the right

Lance Cpl Robinson, who was born in John Street, Darlington, but spent most of his life in Haughton, joined the Northumberland Fusiliers in 1915. In 1916, at Passchendaele, near Ypres, he was badly wounded and left for dead in No Man’s Land. A bullet had entered his head through his right temple, travelled across the roof of his mouth and exited below his left ear.

Somehow, though, he crawled to safety and was sent back to Blighty to recuperate.

“It left him with a balance problem for the rest of his life, so he was unable to dance, a pastime he had enjoyed before the war,” says his grand-daughter, Jacqueline Smith. “He also used to perspire from the temple where the bullet had entered whenever he ate.”

Once he had recovered, he was sent back to France, where, in late 1917, his unit came under heavy fire, with many of the officers killed. Lance Cpl Robinson seems to have taken charge, and, with bullets and shells firing all around, he carried a wounded comrade on his back to safety – an act of bravery recognised with the Military Medal. 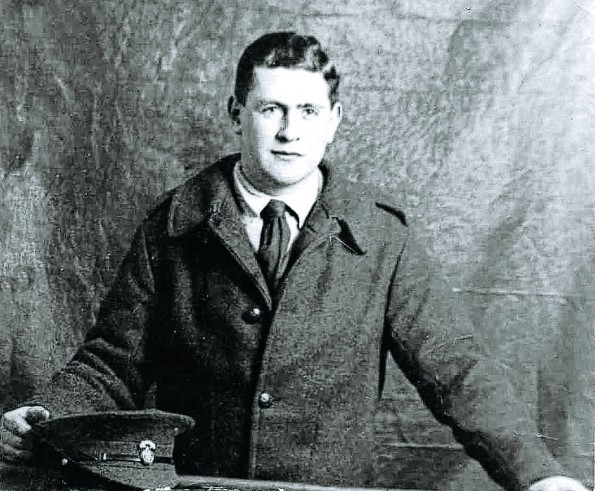 SHOT IN THE HEAD: L-Cpl John Robinson in 1916. His grandson, Martin Smith, will play the Last Post at the end of the talk next Saturday

“He was never formally presented with the medal – it was just handed to him by his commanding officer,” says Jacqueline.

In later life, like so many old soldiers, he didn’t like to speak about his war experiences. He worked for 40 years for Darlington Gas Board, and died, aged 73, in 1970. His story is part of an exhibition that will open in Haughton Methodist Church after the talk, where refreshments will be available.

OF the 32 Haughton soldiers, one is elusive: W Coates. He doesn’t appear on the memorial, which was unveiled in 1920, but he is on the brass plaque that was unveiled in the church in 1924.

The local history society members have tried everything to track him down.

They had high hopes of a William Coates, who was a Darlington schoolteacher called up at the age of 36. Their hopes rose when they discovered that Gunner Coates had been so seriously injured in November 1918 that his next of kin had been informed.

But the brave lad rallied and there is a record of him being demobilised in August 1919. That means he can’t be the W Coates remembered in Haughton for giving his life. Has anyone any clues? 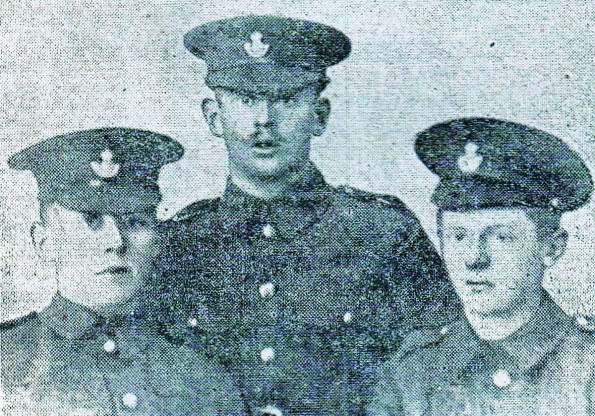 BROTHERS IN ARMS: Robert, William and Thomas Bamlett, of Haughton. Only Thomas survived

MEMORIES 197 told how the three Bamlett brothers from Haughton had met “quite by chance” out on the battlefield in France in May 1915.

They were in different battalions of the Durham Light Infantry, and wrote to Darlington’s Evening Despatch newspaper to tell of the coincidence.

They also told how they had been “under shrapnel fire for ten days”.

But the third, Thomas, came through, and two of his grandchildren, Glenice Lawson and Tom Bamlet, have separately been in touch. They come from different branches of the family, but they tell the same story of Thomas’ bravery.

“He was shot and was caught in a mustard gas attack, and so had a very hard time,” says Glenice.

“He was shot through the neck, and gassed,” says Tom.

They both agree that he was sent to recover in a Glasgow hospital and then returned to the Front. One night, on a raid, he got caught in No Man’s Land under heavy fire, with many colleagues badly wounded. Here, the branches of the story vary a little.

“The family tale was that he crawled a long way to get help,” says Glenice.

“In No Man’s Land, the officers were killed and he brought everyone back safely,” says Tom.

The stories both have the same ending: Thomas finished the war as a captain in the 5th DLI. He settled back on Haughton Green, married into the Blair family of market gardeners, had two children, but never fully recovered from his war experiences. He died in 1947, aged 52, another of the Haughton Heroes.