On one side appeared her husband’s name – the other, her two brothers 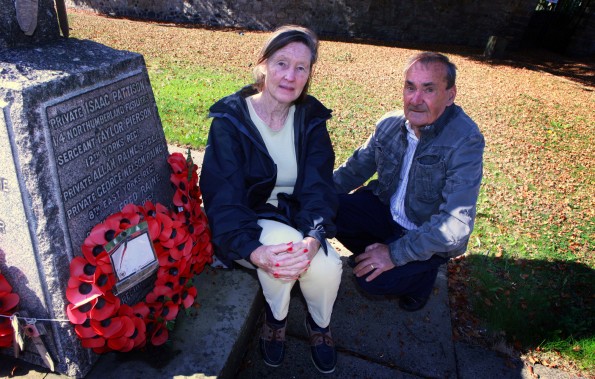 IN Haughton-le-Skerne churchyard on Wednesday morning, a clear autumn day with beech nuts crunching under feet on the path, two second cousins met for the first time and remembered one man from the First World War.

They were Penny Boal from West Sussex and Barrie Lamb from Darlington, and the man they were remembering was Sergeant Taylor Peirson – or Pierson as the village war memorial calls him. 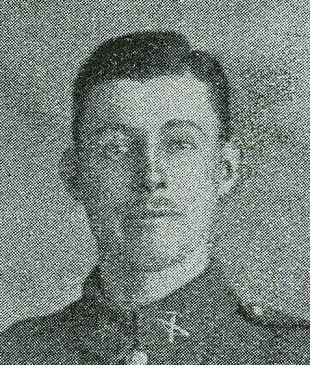 Barrie, a former mayor of Darlington, discovered the war record of Taylor, his great-uncle, through searching on the soldiers’ database on The Northern Echo’s website.

Meanwhile, at the other end of the country, Penny was researching her family tree and got in touch with Carol Atkinson, of Haughton-le-Skerne History Society, to discover more about Taylor, her grandfather.

Echo Memories brought them all together and listened as their war story unfolded.

Taylor Peirson was the son of a railway engine driver. He grew up in Westmoreland Street, a railwayman’s terrace, and went to work in the North Road railway workshops.

Then war broke out, and their lives were blown apart.

Taylor seems to have joined up quite early. He chose the 12th Yorkshire Regiment (Teesside Pioneers) which began recruiting in the Middlesbrough area at Christmas 1914.

He reached France in June 1916, gained promotion and lasted a long time – as Memories 194 told, he died on April 10, 1918, of wounds he hadreceived the previous day near Armentieres on the France/Belgium border. “When he died, my mother was four, and she never spoke of him,” said Penny.

“Poor girl. She would hardly had ever seen him as he had been at war for all of her short life.

“I went to see his grave at Haverskerque and it was very moving. It is a small graveyard, beautifully kept, surrounded by cornfields with stacked corn,” she said. “He survived practically all through the war only to be killed in April and the war ended in November.”

The grief for Margaret, Taylor’s widow, is unimaginable. 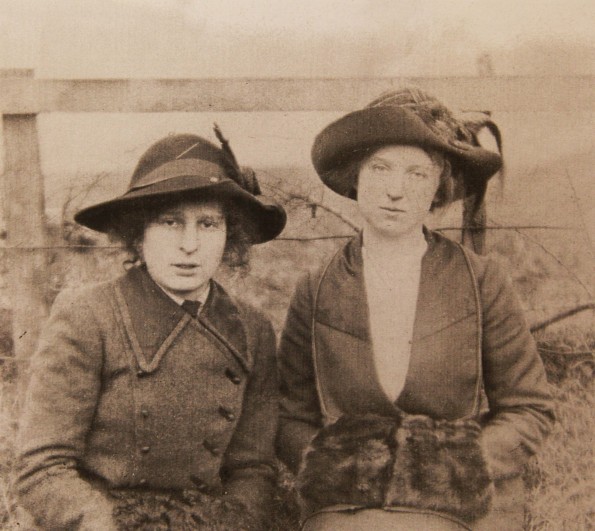 BAMLETT SISTERS: Margaret and Elizabeth, of The Poplars, Haughton. They lost their brothers in the First World War, and Margaret’s husband

She was probably amid the large crowd which gathered outside the church on October 7, 1920, to see the large stone cross memorial unveiled with 18 names carved on it.

There, on the northern face, was the name of her husband, Taylor Peirson.

And there on the southern face, were the names of her two brothers, William and Robert Bamlett, who also had never come home. 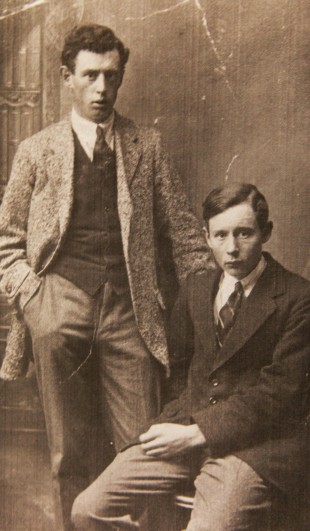 BAMLETT BROTHERS: William and Robert who are named on the Haughton war memorial

William and Robert, plus a third brother, Thomas, had met, “quite by chance” out on the Western Front battlefield, according to a letter published in the Evening Despatch newspaper, in May 1915. William had written home to say that all three of them were now with the 5th Battalion of the Durham Light Infantry and were “billeted near each other”.

That probably cheered Margaret and her mother back in Haughton. But his other news in the letter must have dismayed them because he reported how he had been “under shrapnel fire for ten days during the recent fighting, and had six days in the trenches”.

William, a railway clerk at the Shildon works, wrote: “Many have fallen, including Allen and George Watson, also little Mac, whom you will no doubt remember. All three were killed with shrapnel.”

We can’t know who his friends were, but also named on the Haughton memorial is an Allan Raine, also of the 5th DLI who died just as the letter was being written.

So in 11 months, Margaret lost her husband and her two brothers.

“She moved back to the Bamlett home of The Poplars in Haughton and when my mother was about ten years old, she married again, to Lol Golightly,” said Penny. “He also worked for the railway. He played football for Darlington and may even have won some caps for England, and they had children of their own.”

And so after the terrible carnage of the First World War, life moved on and at last happiness was found.

Because of the bombardment, people were very jittery and feelings were running extremely high. On December 21, 1914, when the mayor of Middlesbrough formed the 12th Battalion, a drunken youth called Thomas Moore were fined 2s 6d for smashing the windows of the famed Darlington pork butcher, George Zissler, in Northgate.

He was convicted after being heard to tell a mate: “Go round the corner and see the window I’ve broken at Zissler’s, the German’s.”

Mike Hutchinson of Norton has researched the 12th Battalion and discovered that at its inaugural meeting, on January 5, 1915, in Middlesbrough Town Hall, 380 men signed up – including many of Middlesbrough’s First Division footballers. 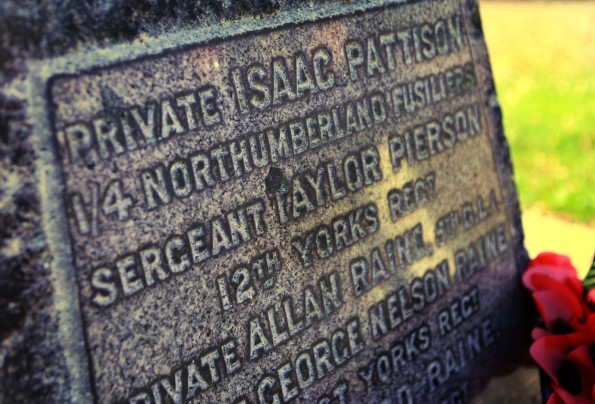 Originally, the 12th was a “Pals” battalion, which was Lord Kitchener’s idea to get gangs of friends to join up en masse. They were stationed at Marton Hall in Stewart Park, which once had been the palatial home of ironmaster Henry Bolckow – their first job was to cover the marble floor with duckboards to prevent it getting damaged.

Towards the end of 1915, the 12th became known as the Teesside Pioneers, and their new collar badge showed a rifle and a pickaxe. This was because they were trained soldiers who usually had a civilian skill that could be used in pioneering work, such as digging trenches and creating supply lines. This may be how railwayman Peirson ended up in the battalion as running railways was very much part of the pioneers’ work.

Middlesbrough’s footballers seem to have been quite fortunate during their time with the 12th, as their only fatality was Harry Cook, on January 9, 1917. A defender, he’d made his debut in the Boro first team in September 1912 as an 18-year-old, and although he only made seven appearances before going away to war, he was regarded as a real prospect.

He was also a teacher at Lawson Street School in North Ormesby.

He died while out with a wiring party. He was due to return home that week and become an officer. He is buried near Albert in northern France.

MARTON HALL was a stately home built in the 1850s by Henry Bolckow, Middlesbrough’s first mayor, who laid out the parkland around it. In 1924, it and the park were presented to the town by Councillor Thomas Dormand Stewart, and Stewart Park opened in May 1928.

Bolckow’s stately home became increasingly derelict and in 1960, the council took the decision to demolish it. However, before demolition work could begin in earnest, on June 6, 1960, the hall burned down in a mystery blaze which was blamed on a discarded cigarette.

But in August 2012, Pat Wilmot of London came forward with an extraordinary story about the cause of the fire: her brother, George Dinsdale, who had just died aged 64 in Skelton was to blame.

Aged 13, George had taken his aunt’s pet jackdaw out for a walk in the park. It, naturally enough, flew away into some bushes and George decided to smoke it out.

“This was when it all went wrong,” said Pat. “He gathered the paper off the floor and made a paper torch and started to wave it about.

“The bird still wouldn’t come out and the next thing the ivy was on fire and it went up like a fireball.

“All he could do was watch as the nearby hall caught light and burned down.

“He never got the bird back and my Auntie Becky went mad when she found out it had gone.”

If she was that upset at losing a jackdaw, imagine her reaction if she’d known that the local stately home had been burned down because of it.