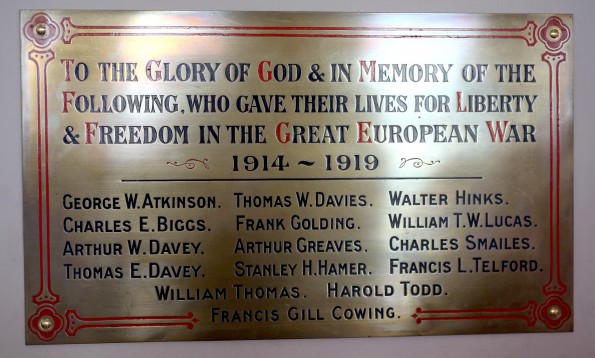 IN MEMORY: The plaque at St Herbert’s Church, Yarm Road, Darlington, carrying the names of 15 men from Darlington who died in the First World War

TWO 15-year-olds and three 16-year-olds from Darlington died in the First World War, as Memories 198 told.

Margaret Garrett, of Darlington, kindly points us to the research carried out by Anthony Magrys when the Eastbourne memorial was unveiled earlier this year in its new home of St Herbert’s Church.

There are 15 names on the shiny plaque, which was originally installed in the former Methodist chapel in Louisa Street. Two of the 15 are Daveys – brothers Arthur, 19, and Thomas, 16, who died within a month of each other during the second Battle of Ypres. They lived with their father, William, a butcher, in Ridsdale Street. Arthur, a printer with the Conservative North Star newspaper in Crown Street, joined the 5th Durham Light Infantry and lasted less than a month at the front.

He died on April 26, 1915, only four days after the battle began, and his body was never recovered.

Young Thomas worked for Cox-Walker Electrical Engineers in Feethams. He was in the 2nd Northumberland Field Ambulance and he was a bugler – buglers usually doubled as stretcher-bearers.

In this role, on the last day of the battle, May 25, 1915, he was collecting the wounded – perhaps even dealing with the first victims of poison gas – on the Menin Road when he was killed.

As well as their father, the two young men left an elder sister, Mary, at home.

THE Centre for Local Studies in Darlington library is holding a First World War drop-in day on Tuesday.

From 10.30am to 1pm, the staff will be on hand to help you begin any research project, from finding out about an ancestor who served to delving into the names on your local war memorial.

Among the exhibitors will be Richard Pullan, who is displaying the results of his research into Gainford’s memorial. He will help people get their own research going.

Stephen Nicholson, the local historian who has created the Darlington database of 1,045 local men who died, will also be available to share his knowledge.

His brilliant work can also be searched on The Northern Echo’s First World War website, thenortheastatwar.co.uk

At 2pm, Stephen will deliver his talk, called Darlington and the Great War: a Shattering Loss.

ON Friday night, at the invitation of the Mayor of Darlington, Councillor Gerald Lee, Chris Lloyd, of The Northern Echo, will give a new talk on the First World War in Darlington library.

The mayor has helped get schools across the borough doing artwork and writing poetry inspired by the war, and this will be on display as a backdrop to the talk.

Doors will open at 6.30pm, and folk singer Trish McClean will open the evening at 7pm. She will sing Known Unto God, her own song composed following her visit to the battlefields of France where her grandfather died in the war.

Chris’ illustrated talk will then follow. It is called Heroes and A Villain: Darlington and the First World War.

THERE are obviously remembrance events going on in communities across the region next weekend, although few will be as comprehensive as those taking place in St Mary’s Church at Hornby, a lovely tucked away place just south of Catterick, North Yorkshire.

On Friday, choirs from Hunton and Newton-le-Willows will perform wartime poems and songs in Pack Up Your Troubles. Tickets are £8, to include refreshments and canapes, on 01748-812122.

On Saturday, from 2pm to 4pm, there will be an exhibition of local war stories, photographs and memorabilia. All are welcome.