The 13 boys of one Darlington street who never came home 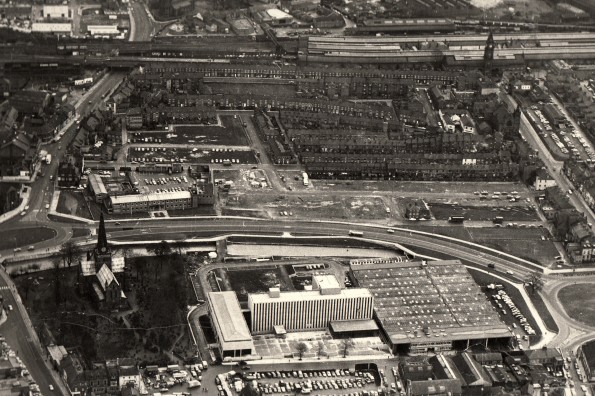 AERIAL VIEW: Darlington in the early 1970s. St Cuthbert’s Church is in the bottom right corner, with Parkgate leading up from it, past the Civic Theatre to Bank Top Station. On the right of the picture, Victoria Road can be seen leading up to the station clocktower. Beside the new ring road, the outline of the demolished horizontal terraces of Backhouse Street and Park Street can be seen. The first standing houses are those of Park Place, which runs from Victoria Road to the Civic

ON the east bank of the River Skerne, there used to be a network of tight terraced streets with hundreds of homes that were cleared away in the late 1960s so the inner ring road could bulldoze through.

Possibly the only survivor from the days of the terraces is a street called Park Place which still runs straight as a die from Victoria Road to the Civic Theatre on Parkgate. Everything around it has been demolished, and now the sorting office, the police and fire stations and the magistrates court are on one side of it and a couple of car parks, a health centre and some sheltered accommodation is on the other.

These new constructions are on the sites of the old houses of Backhouse Street, Park Street, Model Place, Swan Street and, of course, Park Place.

These working class streets were good recruiting grounds when the First World War broke out. According to the research done by war historian Stephen Nicholson, 60 men from these terraces lost their lives in the conflict.

Park Place lost the most – 13 of its inhabitants were killed between May 5, 1915, and August 23, 1918, on the Western Front in northern Europe. Park Place shares the dubious distinction with Cumberland Street, off North Road, of having lost the most residents of any Darlington street.

In order of house number, these are the Park Place boys who never came home – their faces, taken from the Evening Despatch and The Northern Echo: 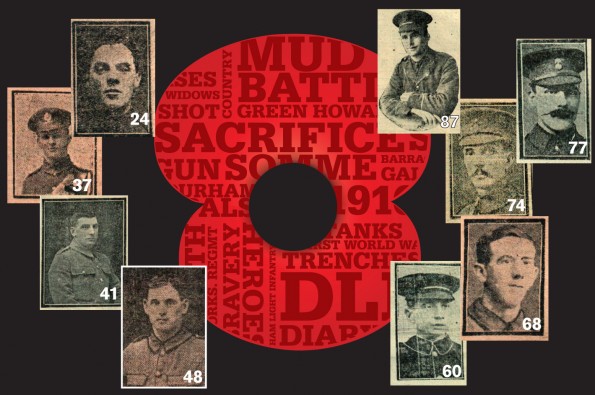 The boys of Park Place, Darlington, who never came home

No 24 – Pte Lawrence Degnan, 21, of the 1st Northumberland Fusiliers. He was a general labourer at Peases’ Mill, where the TK Maxx multi-storey car park is today, and was presumably lodging in Park Place near his work, as his parents lived in Bowes Street on Albert Hill. He was killed near Ypres on May 5, 1915. His body was never recovered, so his name is on the Menin Gate. His brother, Michael, 20, lived with his parents. He also worked at Peases’ Mill and was killed on the same day near Ypres.

No 24 – Pte Ernest Moore, 21, of the 1st Bedfordshire Regiment. He was killed on August 23, 1918, near Albert on the Somme. He was from Kettering, but his widow was living in Pte Degnan’s old house at the time of her husband’s death.

No 37 – Sapper John Elgey, 22, of the Royal Engineers. He was a sorting clerk in the telegraph office at Darlington Post Office. He died on April 19, 1918, at the Battle of Lys, near Ypres.

No 41 – Pte William Kell, 30, of the 12th West Yorkshire Regiment. He worked at Summerson’s foundry on Albert Hill, and was killed on August 18, 1916, near Albert, during the Battle of the Somme. 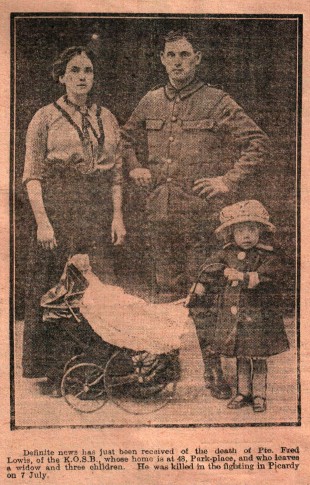 HERO DIES: The front page picture from the Evening Despatch of July 29, 1916, announcing the death of Pte Fred Lowis, who is pictured with his widow and child

No 48 – Pte Fred Lowis, 28, of the 6th King’s Own Scottish Borderers. A painter, he was feted as the “Darlington Mons Hero” in the earliest days of the war. Injured in 1915, he was killed on July 7, 1916, on the Somme, and his name is on the Thiepval monument. He left a wife and three children.

Pte Fred Lowis was on four days home leave in Park Place in October 1915 when he was interviewed by a journalist from the Evening Despatch, the Echo’s now defunct sister paper.

Fred had been with the British Expeditionary Force since the start of the war, and had been driven back from Mons in Belgium to Paris in August 1914 – hence his nickname “the Darlington Hero of Mons”.

He’d been hit on the right shoulder on November 17, 1914, and was hospitalised for a month before rejoining his battalion near Ypres, where he took part in an infantry bayonet charge in a bid to capture Hill 60. His regiment had no bayonets, so he advanced armed with a pickaxe with his rifle slung over his shoulder.

“At Hill 60, we took an unwounded officer prisoner,” he said. “As our people treat them well, he was given a certain amount of liberty, a private being left on guard. Suddenly, he snatched the rifle from the private and shot him. What would you do with a fellow like that? He was immediately shot.”

No 60 – Pte Robert Allinson, 23, of the 8th Yorkshire Regiment. He was a coremaker at an iron foundry, but he died near Contalmaison on the Somme on October 8, 1916. His name is on the Thiepval monument. He left his widow, Evelyn, in 60, Park Place, along with his parents at No 28.

No 68 – Pte James Griffiths, 31, of the 9th Northumberland Fusiliers. A fellmonger at Darlington Forge, he died on March 23, 1918, at the Battle of St Quentin near Arras.

No 74 – L-Cpl David Iceton, 38, of the 7th Yorkshire Regiment. He was a cranedriver at the Railway Plant Company who died on July 3, 1916, near Albert on the Somme. He left his widow, Jane, and their two sons and daughter in Park Place.

No 77 – L-Cpl John Kirby, 33, of the 11th Northumberland Fusiliers. He had worked his way up on the railway, starting as a cattle wagon cleaner and becoming a freight shunter in the Bank Top goods yard. He died near Pozieres during the Battle of the Somme on September 19, 1916. He left a widow, Florence, and their son in Park Place. 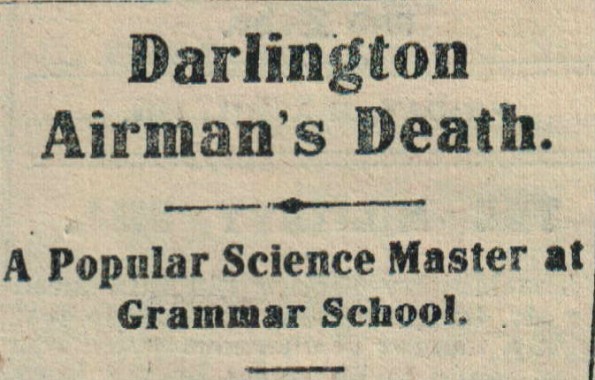 LOST AIRMAN: The death of Lt John Milner, from the Evening Despatch of April 28, 1916

No 87 – Lt John Milner, 26, of the Royal Flying Corps. He had won a scholarship to Darlington Grammar School, had received a degree from Armstrong College, Newcastle, and become a chemistry master back in Vane Terrace.

He gained promotion to Purley Grammar School in London, from where he joined the forerunner of the RAF at the start of the war. His mother, Jane, expected him home on leave in April 1916 to collect his pilot’s certificate, but the leave was suddenly cancelled.

Instead, he was in action near Armentieres in northern France and he was killed on April 26 – when he should have been home in Park Place.