Vicious but quiet weapon of war 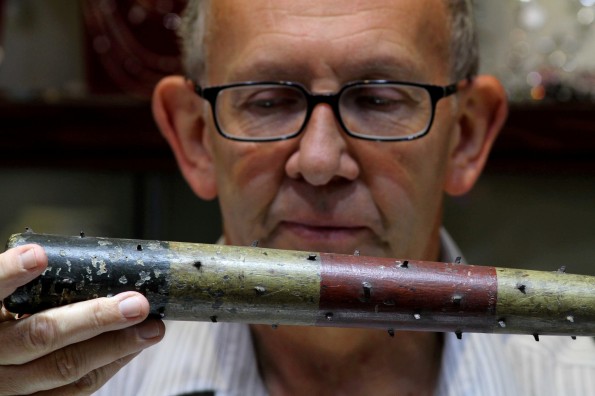 THE First World War has a terrible reputation for its industrial slaughter. Men were killed in their tens of thousands by new technology: by rapid fire machine guns or by bombs dropped from flying machines or by shells fired from the first “land battleships”, or tanks, which The Northern Echo described when they made their debut at the Battle of Flers-Courcelette in September 1916 as “enormous, sinister flat-footed monsters of steel, spouting flame from every side”.

But homemade weapons that harked back to a more primitive era were also employed – like this vicious trench club.

Darlington jeweller and memorabilia dealer Robin Finnegan, of Post House Wynd, acquired it a couple of decades ago.

For much of the war on the Western Front, the soliders were bogged down in their trenches, neither side able to make a meaningful breakthrough. Therefore, the soldiers were reduced to skirmishing with the enemy, perhaps when they were out in no man’s land, repairing the defences or collecting the dead or scouting for clues about what the opposition was up to.

Some officiers kept their men alert and aggressive by organising trench raiding parties – night-time sorties over the top to cause mayhem in the enemy lines.

Such missions needed stealth. A noisy gun would give the game away, and a bayonet attached to a rifle was too unwieldy to use in a narrow trench. So the soldiers of both sides went armed with knuckledusters, punch daggers, knives and trench clubs.

Although some army units did issue officially made clubs, many of them were homemade out of old spade handles by men who were skilled with their hands. The bashed hobnails into the wood and smashed the heads smashed off to make a quiet but brutal weapon. Metal weights or flails were attached to the ends to make them more lethal still.

The Imperial War Museum has a frightening collection of clubs, although none of theirs is patriotically painted red, white and blue, like Robin’s. 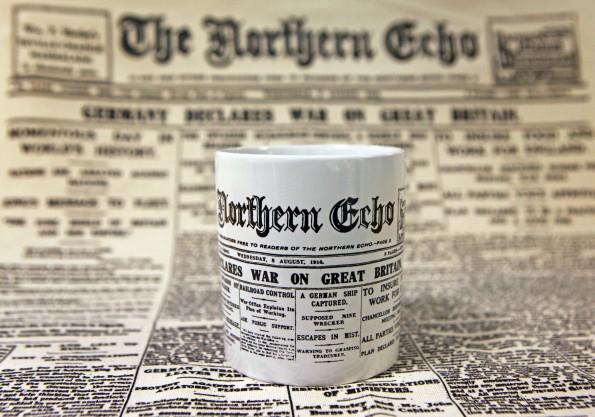 ECHO SOUVENIR: The mug and tea towel being offered by the Echo for £5.99 for the pair

TO commemorate the centenary of the outbreak of the First World War, The Northern Echo has turned its front page from August 5, 1914, into a limited edition mug and tea towel.

The page reports the previous day’s devastating news that Germany had invaded Belgium and so had dragged Britain into the conflict.

With The Northern Echo’s name in large, black Gothic letters at the top of the mug and the towel, the two items make for a unique and fascinating piece of war history.

They would also make for a highly unusual stocking filler for family or friends this Christmas.

They cost only £5.99 for the pair, and can be bought at the Echo’s offices in Priestgate, Darlington, and Newgate Street, Bishop Auckland. Alternatively, fill in the form and post it to us with your money.

From The Northern Echo of 100 years ago:

Cream 3oz butter, and ¼lb castor sugar together. Beat three cooking eggs thoroughly, and add to butter and sugar. Then add gradually, beating well all the time, 5oz flour and 3oz ground rice. Flavour with vanilla and add one teaspoonful of baking powder. Grease some tins, pour in mixture and bake in a sharp oven 20 minutes.

Cut a fowl or rabbit in small pieces, shred an onion, and fry in butter. Sprinkle fowl with flour, salt and curry powder and fry brown. Add a pint of stock. Stew slowly to half quantity, and serve with rice. Slice three Spanish onions very fine, and blanch, and slice about 30 almonds. Fry to a light brown, and u8ntil dry. Sprinkle these over the stewed chicken or rabbit.

From: Miss A Cundall, Strensall.