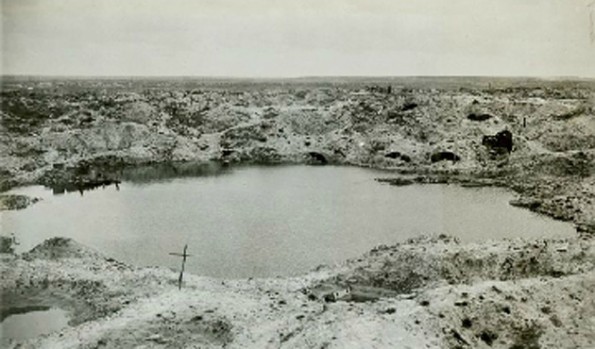 BATTLE GROUND: One of the craters at St Eloi

NINETY-EIGHT years ago, our diarist, Gunner George James, was in the midst of one of the muddiest encounters of the First World War.

At 4.15am, on March 27, 1916, at St Eloi, about ten miles south of Ypres, the British detonated six large mines which they had tunnelled under German lines.

The explosions created six large craters, and meant that there were now 17 craters around St Eloi.

The two opposing forces then spent a fortnight fighting to see who should take possession of the newlycreated craters. It was a deeply confusing landscape, with no natural features left, and the frontline shifting continuously. To make matters worse, it rained almost incessantly – as George’s diary shows – and the craters filled with waist-deep muddy water.

Gunner George was a coalminer from Littletown, a village a couple of miles east of Durham City. We’ve been following his diary since his arrival with the Royal Field Artillery on the Western Front in November 1915. He’s experienced some heartrending events, and witnessed some appalling scenes, and his last entry, which we published in Memories 172, was succinct.

This is what happened to him in the days after his 21st birthday:

Pretty quiet except a little bombardment over to our left near St Eloi.

Heavy fighting at St Eloi. Captured 80 Germans and a mine crater.

Starting about 6pm, a lively battery strafe commenced just here. We began chucking trench mortars across, terrible things, these each contain 60lbs of metal etc. They make terrible havoc of the German trenches. They are fired out of a mortar at a high angle (1).

When they (the trench mortars) began today, there were trees, sandbags, girders, baulks and German soldiers up in the air. The Germans did not like them at all, so they began to shell the trenches heavily. Then ensued a very lively hour or so.

There was no doubt as to who got the worst of the business.

A German deserter came across this morning. From what I hear, he gave some valuable information. Strange to say, this German lived at Sunderland before the war. He has a wife and family there at present.

German artillery very active on our front. Our guns were very quiet. Germans have got the wind up I think.

We have got our new guns.

The signallers had to draw for leave today. There were five of us to draw for it (2). I had the good fortune to draw “Blighty” so I expect to be going to Littletown sometime about the 24th. 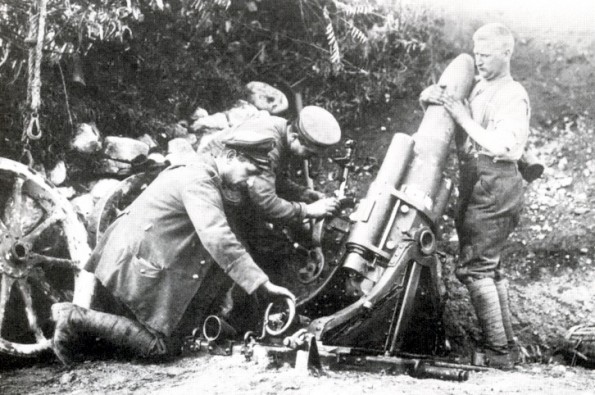 Today the Germans made three attacks on our left. They twice managed to gain a footing in the trenches, but were bombed out again.

During bombardment we lost 52 men. We captured about 200 prisoners.

The Germans left nine dead in one of our bombing posts.

Very windy, wild and wet, the kind of weather that gives one a great desire to be at home with the big roaring fire. I’ve had washing hanging out for three days trying to get it dry.

We moved our position again today, by the side of a certain laundry. I’ve slept in some strange places, but never before in a laundry wash tub.

We are restricted to a certain amount of ammunition – why I don’t know. Reports say that the Germans are massing troops in front of St Eloi. Someone stole my shirt, which I’ve been washing.

Very quiet, weather very wild. This is our Tommy’s birthday – 14 (3). I suppose he will be going down the pit: “God Bless Him.”

(1) Heavy artillery shells had a fairly flat trajectory so unless they landed on top of their target, they tended to skim across the landscape, missing the enemy dug in trenches below. Trench mortars were fired up out of one trench so that they dropped down on top of your opponents’ trench. They were slow moving so, if you were lucky, you heard a shell dropping on you and you had just enough time to run out of the way.

(2) A signaller, like George, was probably on the frontline sending back intelligence – either by phone or use of lights and mirrors – to his heavy artillery, telling them where they should be aiming their shells.

(3) Brother Tom did indeed go down the Littletown pit.

Although 37-years-old when the Second World War broke out, he volunteered for the Pioneer Corps, and fought in North Africa and Italy. He landed in Normandy shortly after D-Day and fought his way across Europe. Well loved by his family, he died in Sunderland in his 80s.

(4) George is right. After a fortnight, the two sides had fought themselves to a standstill, the Germans occupying four of the six craters.

TE Hulme, a close friend of Ezra Pound and TS Eliot, was probably in the trenches at St Eloi at the same time as Gunner George James, and he wrote this well known poem about the hopelessness that the soldiers felt:

Over the flat slopes of St Eloi
A wide wall of sand bags.
Night, In the silence desultory men
Pottering over small fires, cleaning their mess- tins:
To and fro, from the lines
Men walk as on Piccadilly
Making paths in the dark
Through scattered dead horses
Over a dead Belgian’s belly.

The Germans have rockets.
The English have no rockets.
Behind the line, cannon, hidden, lying back miles.
Beyond the line, chaos:

My mind is a corridor.
The minds about me are corridors.
Nothing suggests itself.
There is nothing to do but keep on.