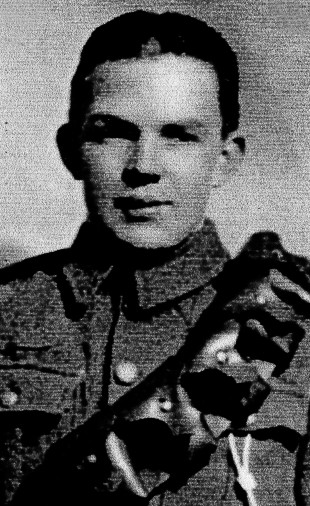 IN the second installment in Gunner George James’ diary, written 98 years ago, he has been withdrawn about 20 miles from the frontline at Ypres.

Gunner James, aged about 20, was a miner from Littletown, a pit village to the east of Durham City.

His diary is extremely powerful and gives an extraordinary insight to an ordinary soldier’s life in the trenches.

Last week, he told of the “bitter cruel day” when he learned his brother, John, had been killed, and he graphically described the aftermath of a gas attack, of “bodies lying trampled in the mud”.

Here, though, he faces a different kind of painful agony:

We’ve been on the march again. We are now stationed near Hazebrouck in old farms. Horses and guns are in the field near to. We came in here on the 6th after a days march from Millam. It was bitter cold and windy. I got neuralgia. I am going to the 29th Field Hospital today. There is a bathing parade on.

I am in hospital at B having some teeth drawn. The dentist here is a young man. He is undoubtedly clever, but hasn’t much sympathy and his grinning idiot of an assistant is an ass. He came to the door this morning and asked for George James, escorted me to the dentists grinning all the while.

The dentist invited me to sit down, so of course I did so. It seemed very nice at first. He looked at my teeth, and he turned round to get cocaine or something which freezes the gums, as I thought. But I was deceived.

Before I had time to speak, that objectionable assistant had hold of me and the dentist was screwing and tugging away at my teeth and he went on for about five minutes.

It is a fairly large hospital this, about 15 or 16 miles behind the lines as near as I could say. I think I’ll be out tomorrow if I get half a chance..

German seaplanes were dropping bombs on Hazebrouck yesterday, there seems a good deal of artillery fire going on Ypres and Armentieres way.

Bottomley (1) says in his precious paper that we got them well “whacked”. I think he would alter his opinion if he was up the line a day or two.

(1) Horatio Bottomley was an extraordinary fellow: a journalist, swindler, goldminer, racehorse owner, twice MP, twice bankrupt, bon viveur, serial adulterer, chairman of the Financial Times who was imprisoned for seven years for fraud. In 1906, he started the sensational John Bull newspaper, which was fiercely patriotic and despised the Germans. During the War, Bottomley used his immense oratorical skills  his “huckstering demagoguery”, according to his entry in the Oxford Dictionary of National Biography  to recruit soldiers.