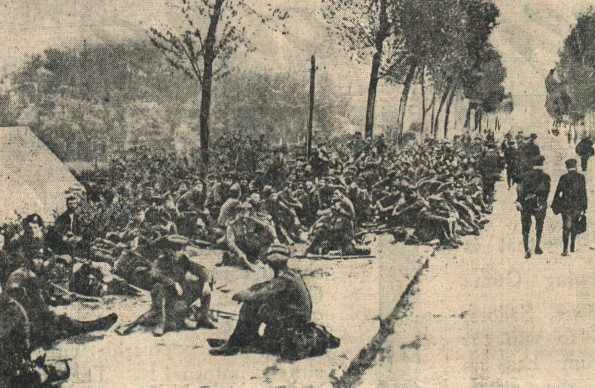 This picture from The Northern Echo of June 27, 1916 – or X-Day – was taken during the build-up to the Battle of the Somme. Soldiers wait in roadside bivouacs

NINETY-EIGHT years ago this week, Gunner George James was in the trenches near Albert, in northern France, writing his diary.

We’ve been following it since the start of the year, but now as July 1, 1916, approaches – the first day of the Battle of the Somme on which the British suffered 60,000 casualties – it is now becoming horrifically exciting.

Aged 21, George was a pitman from County Durham who left school at 14. But he can certainly write.

As you will remember, he’s from the small mining village of Littletown, near Durham City, and he’s in the Royal Field Artillery.

In late June 1916, George was laying down the biggest bombardment the world had ever seen.

ALL OUT ASSAULT: A gun battery, like Gunner George’s, during the 1916 Battle of the Somme

The Allies’ idea was to punch a 15 mile hole in the German front line.

The hole would start on the north bank of the River Somme – very near where our George was, close to the village of Carnoy – and extend northwards towards Serre. It would pass through what are now some of the most famous names in British military history: Mametz, Montauban, Fricourt, La Boisselle, Pozieres, Thiepval and Beaumont- Hamel.

The bombardment was supposed to last five days, destroying the enemy barbed wire, gun dug-outs, trenches and, of course, soldiers.

On the sixth day – codenamed Z-Day – the bombardment would cease and the British and French soldiers would clamber out of their trenches and walk unhindered across no man’s land and jump into the remains of the German trenches where there would not be a soul left alive.

Or that was the theory. 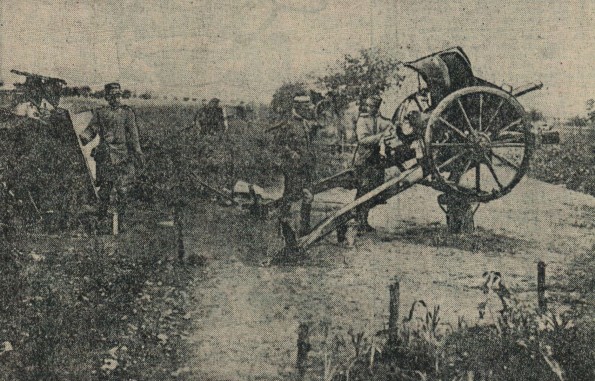 AERIAL ATTACK: This picture, published in The Northern Echo on June 24, 1916 – or U-Day – shows how an artillery piece has been adjusted in a bid to fire at German planes

Because Z-Day was the day of the infantry advance, the timetable meant that the five-day bombardment would start on U-Day, with 3,000 British and French guns opening up. Between them, they were to fire 1.6 million shells in a week – more than had been fired in the first year of the war.

On the first two days – U and V days – the guns were to train their fire on the barbed wire in front of the German trenches; on days W, X and Y, the range was to be lengthened so that the trenches themselves were pounded.

As George’s diary reveals, U-Day was Saturday, June 24, 1916, with Z-Day, the day of the great advance, supposed to be on Thursday, June 29. Let’s live the start of the bombardment with him:

THERE was an exciting air fight this afternoon, seven German and three British planes. Saw one Germany plane toppling over like a shot pigeon, but by some marvellous manipulation by the pilot he righted himself again. I did not see the result of the scrap – they were at it a long time. Judging by what I can see here, we have four aircraft to Germany’s one.

German guns shelled the valley and village of Carnoy a little more than usual today. The bombardment has not commenced yet.

FIRST day of the bombardment – Germans have retaliated very little up the present. They are rather staggered I expect. The very earth is shaking and the air quivering.

What a night. What an experience.

Standing in the trench last night outside the dug-out, I saw and heard and felt and experienced what will remain stamped on my memory forever. Seeing the flames and the flash and the smoke etc from thousands of bursting shells was a night to convince one who had never seen the like before that the end of the world was at hand. 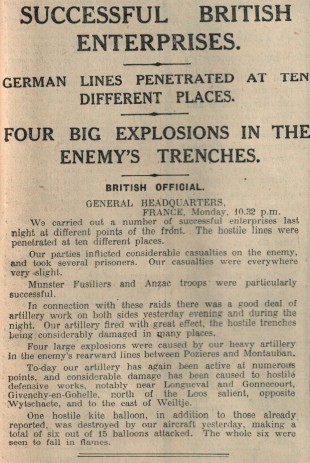 It was as if Hell’s own fire had opened.

For the Germans, it must have been terrible – and this is going on a 15 mile front.

The Germans have offered but little retaliation – they blasted away defiantly last night for a few minutes with machine guns. I suppose it let us know that there are still some of them alive.

This afternoon our aeroplanes brought down two German observation balloons, both of which vanished in smoke and flames.

The bombardment grew more intense last night. The night was never dark for fire illuminated the countryside as far as one could see.

One cannot help feeling a thrill of pride when listening to the thunder of our British guns, but truly it is awful.

A PICTURE of tragic grandeur, bombardment still continued up and down the front the same. Occasionally when our guns slacken for a few moments, you can hear the rolling thunder right up the lines.

Little sleep the last few days, 15 of us were in a dug-out intended to accommodate seven. We’ve got to lie down, one at a time, edgeways on, when one turns, we all turn. Anyone late in returning to the dug-out runs the risk of losing his space.

11pm: Firing been very heavy all day, quieter at present.

The French on our right were rather busy this afternoon. Our infantry made a feint gas attack. The great day will be Thursday when we hope to advance.