Since Christmas, Memories has been serialising the First World War diary of Gunner George James, a miner from the Durham pit village of Littletown. We are following his war on the Western Front as it unfolded exactly 98 years ago. 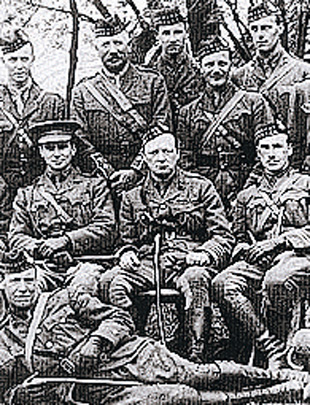 HONOURED GUEST: Lt-Col Winston Churchill, centre, with the Royal Scots Fusiliers in early 1916 at Ploegsteert in Belgium – he was a mile or so north of Gunner George

IN our excerpts so far, we’ve told how George was born in 1895, left school at 13, followed his father down the pit and when war broke out, joined the Royal Field Artillery.

After training, George, a staunch Methodist, landed in France on May 12, 1915. He began his articulate and powerful diary in November 1915.

So far we’ve shared with him some appalling scenes in No Man’s land – “it was a sight I shall never forget. It moved one’s very soul. There were bodies lying trampled in the mud at the bottom of trenches” – and we’ve felt his overwhelming grief when he learned his brother, John, had been killed in the Dardanelles.

In our last extract (Memories 166), the 20-year-old was on duty at a snowy observation post at Armentieres, about 15 miles south of Ypres. For him, February 1916 was uneasily quiet. We could feel the worry gnawing at the back of his mind in each of his entries.

These are his thoughts in the first half of March:

Nothing of importance happening on our front. Very heavy snow falls these last few days. Gas alarms sounded this morning at 1.30.

The Battery was standing to for two hours. Nothing came of it however.

The weather conditions are improving. Spring is coming, the sun is warm, when it does break through. The starlings and sparrows co-operate in the mornings to welcome the advent of spring. We have retaken all the lost ground at Ypres. According to reports the French are holding up splendid at Verdun against tremendous odds.

Germany declares war on Portugal (1). Artillery duel on our front this morning.

Germans use a great deal of rifle grenades.

The sappers are busy fortifying our observing station. The Huns tried their best to put a hole in the wall with Manue this morning. It has been a grand fine day.

Just been dreaming of Foot & Bridle & awoke to find myself staring at the ugly muddy gunpit (2). Several large flocks of birds flew over today in northerly direction, probably towards England.

Things in general are looking a little brighter, but the worst of it is most of us in the battery are pessimists.

I am afraid I don’t attend to this book regularly.

Saw a photo of Winston Churchill today in his old suit. He is back in England again. I was talking to a “Jock” the other day and he told me that Winston crawled out to inspect the German barbed wire the other night. I believe he woke up bit now – if only the other fellows would pull together a bit (3). 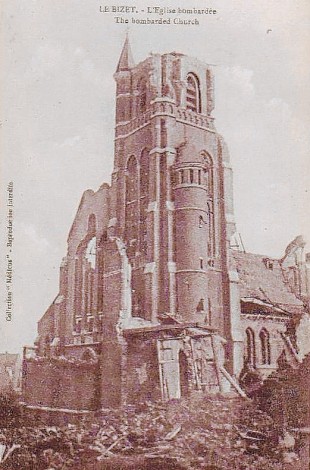 It is an uncommonly hot day here. Germans were shelling Le Bizet Church a deal (4). There was a few casualties amongst the civilians on the way past the church to the OP. I saw one poor fellow lying in the ditch dead.

He was an old French peasant, but he was a man created by God, somebody’s husband may be. He was killed by a German shell, he paid the penalty for daring to stick to the old homestead.

(1) Although Portugal is Britain’s oldest ally, dating back to 1386, initially at the outbreak of the war, it was officially neutral. However, it found its ships trading with Britain were hampered by German U-boat activity and it became increasingly concerned 1OO GUNNER GEORGE’S DIARY THE NORTH-EAST AT WAR about its African colonies of Angola and Mozambique.

(2) Manue is presumably a large German gun, but we don’t know why George s h o u l d have been dreaming of Foot & Bridle – as a staunch Methodist, he had signed a pledge abstaining from alcohol, so it can’t have been a pub. Can you enlighten us?

(3) Churchill was First Lord of the Admiralty when the war broke out. He had been building up the Navy with dreadnoughts, and was keen to fight. He ordered the campaign in the Dardenelles, in which George’s beloved brother was killed in November 1915. The failure of the campaign caused Churchill to resign from the Government and in January 1916, he joined the Royal Scots Fusiliers as a lieutenant-colonel, fighting at Ploegsteert – about a mile north of Le Bizet, where George was. Although Churchill only spent 100 days on the western front before returning to his “old suit” and Parliament, the men appreciated his presence, as George’s diary shows.

(4) Le Bizet church was all but destroyed by German shells by 1917.

All of Gunner George’s diary published so far can be found on our superb First World War website, thenortheastatwar.co.uk