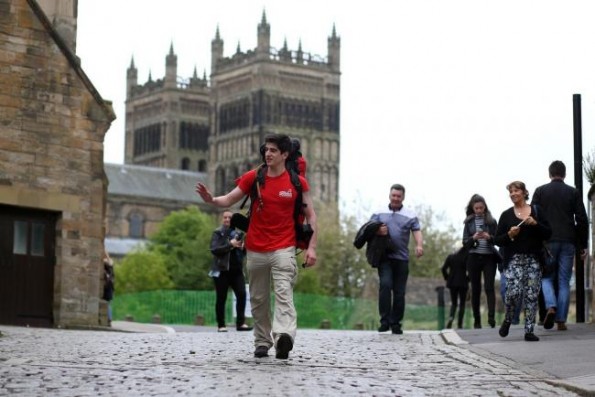 Durham University student Jordan Blunsom at the start of his 950 miles walk to The Somme from Durham City to raise money for Walking with the Wounded charity. Picture: CHRIS BOOTH

A DURHAM University student has taken the first steps in a poignant 950-mile journey on foot to the battlefields of the Somme.

Jordan Blunsom, 22, will walk more than 30 miles a day over 31 days, raising cash for the veterans’ charity Walking with the Wounded.

He will arrive at the battlefields just in time to take part in the 100th anniversary commemorations of the bloodiest battle of the First World War – having taken around 1,900,000 steps in the process.

Jordan – who coordinated and managed the planning of the walk himself – embarked on the epic trek from Durham University’s Palace Green Library, which is hosting a major exhibition ‘Somme 1916: From Durham to the Western Front’.

The Durham University exhibition marks the involvement of the people of Durham and the North-East in the battle.

Jordan, a history student, will make his way across England take the ferry across the Channel and head for the Thiepval Memorial, in France, to be part of the centenary commemorations.

Jordan will walk most of the way by himself and will camp as much of the route as possible to raise money for Walking with the Wounded. 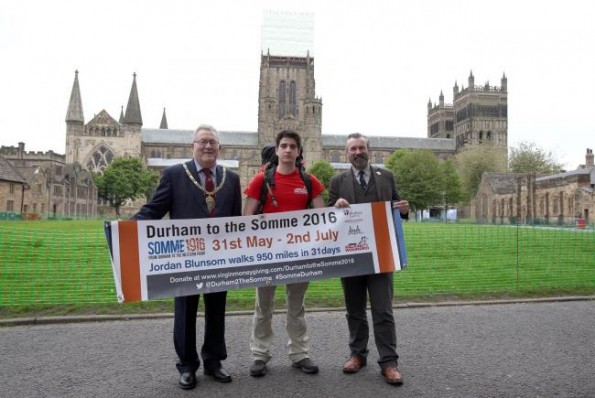 Durham University student Jordan Blunsom at the start of his 950 miles walk to The Somme to raise money for Walking with the Wounded charity. At the starting point for his walk at Palace Green with Chairman of Durham County Council, cllr Eddie Bell and Director of Culture at Durham University, Keith Bartlett

The charity supports all veterans with physical, mental or social injury to gain the skills and qualifications necessary to develop new careers outside the military, re-integrate into society and provide long-term security for themselves and their families.

Jordan said: “I have always done fundraising events and wanted to do something on a much larger scale.

“With the anniversary of the first day of the Battle of the Somme was coming up, I thought it would be a fitting way to commemorate that.”

He added: “I hope people will donate generously to this fantastic charity. The money will literally change the lives of those who still, to this day, face the consequences of conflict and rely on charities such as Walking with the Wounded for essential support.”

She said: “The exhibitions team for Somme 1916: From Durham to the Western Front wish Jordan all the very best for his incredible fundraising walk to the Somme.”

To find out more information about Jordan’s walk or to make a donation go to www.virginmoneygiving.com/DurhamtotheSomme2016, or follow him on twitter @durham2thesomme.

The Northern Echo is campaigning to raise £20,000 for a fitting memorial to the DLI soldiers who fought at the Somme.

Anyone wishing to support The Northern Echo appeal can make cheques payable to Former Charities Of The Durham Light Infantry and send them to: The Rifles Durham Office, Elvet Waterside, Durham DH1 3BW.