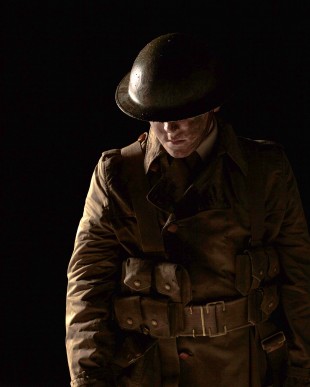 UNIQUE EXPERIENCE: One of the actors from No Turning Back

THIS month sees the end of this year’s series of events and activities across the country marking the centenary of the Battle of the Somme.

Here in Durham, the county council sought to ensure that the sacrifice of those brave men who fought for our freedom would never be forgotten. Through the innovative, imaginative and often moving Durham Remembers programme, the council brought the stories of 100 years ago alive for us today.

At the Gala Theatre, two productions were staged as part of the programme – both unique and very different from anything the Gala had staged before.

In early summer, 1916: No Turning Back quite literally created the atmosphere of the Somme in the auditorium. The seats were removed, the floor raised and the space turned into a walkthrough experience, the likes of which many visitors had never experienced before.

Two pairs of local actors transported visitors back 100 years and took them from the signing-up process of those men who volunteered to become Durham Pals, through to the battlefields and trenches of Northern France, and back home to the waiting families.

This unique and emotive experience was hugely well received and a comments board outside the production included commendations like: “Excellent – really brings it home”, and “A real experience – so pleased we could share in this and remember our war heroes.”

Following on from this was a return to the more traditional offer of the theatre, with a specially written play, The Fighting Bradfords. Adapted from the book by local historian Harry Moses, it celebrated the lives of County Durham’s most heroic family – The Bradfords of Witton Park.

All four served during the First World War. Only one, Thomas, came home – all were hailed heroes.

Thomas was awarded the Distinguished Service Order for his gallantry during the second Battle of Ypres. George was awarded a posthumous Victoria Cross for his “absolute self-sacrifice” after he was killed as he leapt into enemy fire in order to anchor his ship, enabling his crew to land at Zeebrugge Harbour.

James was awarded the Military Cross for gallantly leading his men into an enemy trench, personally killing three Germans, capturing many prisoners and taking out two machine guns.

And the youngest brother, Roland, was awarded the Victoria Cross for his “conspicuous bravery and good leadership” and was promoted to Brigadier-General at the age of 25 – the youngest in British Army history. 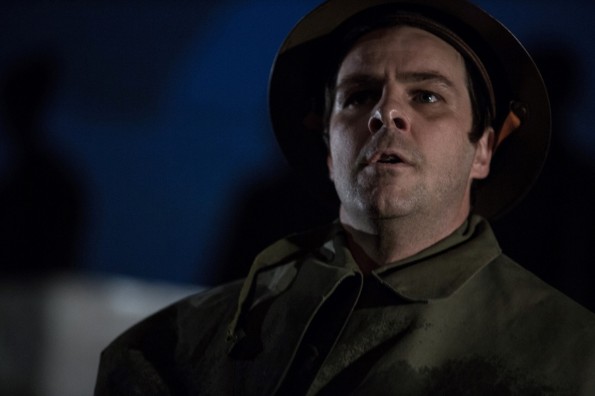 OUTSTANDING: The Fighting Bradfords at the Gala Theatre in Durham

An all local cast performed to rave reviews, bringing to life the tragic and heroic tales of the Bradford brothers and their family – including most poignantly the roles of the Bradfords’ mother and Nancy, widow of James, which were both played by Jessica Johnson. One reviewer said: “This is not an easy watch; but neither should it be. What it is, is a triumph.”

Commemoration of the achievements and sacrifice of the Bradford brothers continued as work on a memorial garden, which will eventually become home to two of the county’s seven commemorative Victoria Cross stones, began in their home village on the centenary of Roland’s incredible gallantry.

Elsewhere, during the summer, Durham Cathedral welcomed the premiere of the Durham Hymns – a new choral suite with lyrics by poet laureate Carol Anne Duffy – as part of Brass Festival 2016.

And the city also played host to a six-month exhibition, Somme 1916: From Durham To the Western Front, at Palace Green Library.

This first of a yearly series of temporary exhibitions from Durham University and Durham County Council, it brought together artefacts and archives from the DLI Collection, Durham County Record Office, and more, charting the experiences of the trenches through the eyes of two Durham soldiers, a nurse and an Army chaplain.

But the Durham Remembers programme didn’t simply look back to the past and two events in particular saw new relationships developed with Durham’s partners over in the Somme region of France.

On July 1, a party of 100 schoolchildren from across County Durham travelled to the Somme to take part in the official Anglo-French commemorations of the centenary of the battle. They stood alongside French and British dignitaries, including members of the Royal Family, the Prime Minister and the French President.

Together, 600 British children and 600 French children laid wreaths at the Thiepval memorial.

Leader of Durham County Council, Councillor Simon Henig, said: “We were delighted that a third of the children selected to represent our country that day came from schools in County Durham. This is testament to the strength of the relationship that we have as a county with our partner county in France, the Somme, and these students did their county and their country proud.”

The pupils spent a week in the region, learning more about the war as well as developing their French language skills, working with their French counterpart students and absorbing the French culture.

Ben Hays, 14, from Wolsingham took part in the trip and said: “Seeing all the Armed Forces and members of the royal family come together on the day was amazing and it was quite emotional putting our wreaths on the graves. It’s an experience that none of us will ever get again and it was really special.”

And this was not the only trip to Thiepval this year. Members of the Somme Memorial Partnership (made up of the cathedral, the county council, Durham University, The Northern Echo and The Trustees of the DLI) also travelled to the Somme to unveil a unique memorial of their own. 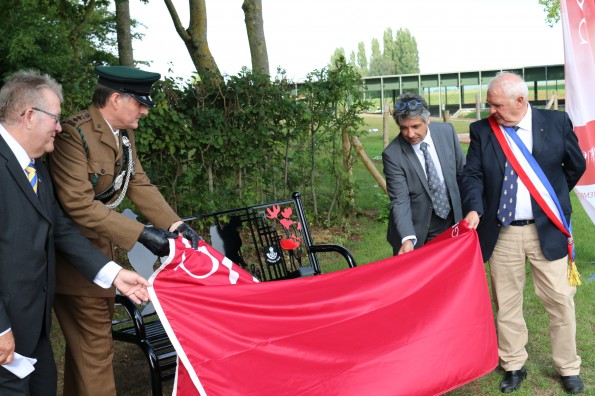 The memorial took the shape of a specially commissioned bench and lectern, dedicated to the 18 DLI – a Pals battalion made up from volunteers from all professions: miners, bakers, farmers, who were often sons, fathers and brothers. Above all, they were childhood friends, comrades in arms, embarking upon what was for many, their first and final journey beyond the shores of Britain. On July 1, 1916, they lost 75 men and saw 250 wounded in just 24 hours.

The Durham Pals were the only Pals battalion not to have an official memorial out on the Somme, so the Somme Memorial Partnership was set up and a public appeal raised funds.

Two benches were installed. One is on the Racecourse riverbank where the Pals first mustered at the start of their journey to the front, and the other is in a shaded spot at Thiepval, the official Franco-British memorial to the missing on which are inscribed the names of so many of the Durham Pals who died in battle and whose bodies were never recovered.

Plans are also in place to mount a lasting, traditional memorial in the village of Bus-les-Artois, the final village the Durham Pals passed through before they took up their positions ready to go into battle.

Cllr Henig added: “This year, packed with its remembrance events, has been a fitting tribute to all those who fought at the Battle of the Somme and we are delighted that the public got on board with the Durham Remembers programme in such a responsive way. We have showcased some of our cultural and historical assets to their finest through the programme and we hope that everyone who attended or took part in the various elements feels that they have contributed in their own way to Durham’s year of commemoration.”