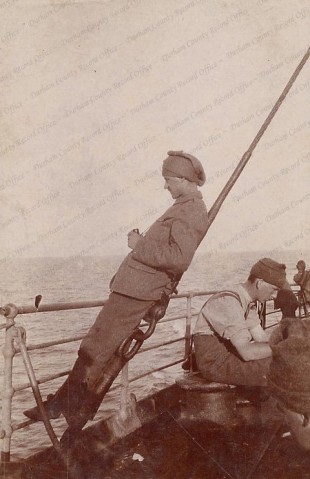 A RELATIVE has revealed the fate of two soldiers captured in a rare photograph as they made their way to the Somme – where both would be casualties on the first day of that momentous battle.

Jim Whitton of Darlington immediately recognised the image of his great uncle Private Harold Witham and a friend Lance Corporal Bob Gilbert of the Durham Light Infantry (DLI), when it was recently published in The Northern Echo.

And he has thrown his weight behind our campaign to create a lasting battlefield memorial to honour the bravery of County Durham soldiers who gave their lives on the Somme 100 years ago.

The two men were members of the 18th Battalion of the DLI, better known as the Durham Pals, who were slaughtered on the first day of the Battle of the Somme on July 1, 1916.

The photograph was taken as men made way to France on SS Ivernia, following a stint guarding the Suez Canal against attacks by the Turks.

Mr Whitton said: “I was researching my family history when I came across the photography in Durham County Record Office.

“I was really quite fortunate because there are hardly any photos of individuals in the archives.

“It just happens to be inscribed with their names at the bottom. It was a lucky find really. When I saw it in The Northern Echo, I recognised it immediately.”

He added: “The photo of the two men aboard SS Ivernia shows my great uncle, Harold Witham, leaning on the rigging, and Bob Gilbert.

DIED: Private Harold Witham who died as result of wounds suffered on the first day of the Battle of the Somme on July 1, 1916

“Both men were to die as a result of the battle.

“Bob, of Middlesbrough, died on July 1 and is buried at Colincamps in Belgium.

“Harold was wounded in the first offensive with a bullet wound which entered at his shoulder and damaged his spine, causing paralysis.

“He was shipped back to England and died on July 14 at the military hospital in Netley, Southampton at the age of 27.

Pvt Whitham was the second youngest of 13 children, born in Moston, Manchester. He trained as a teacher at Durham University’s Bede College.

Mr Whitton said: “Although he had been in the Officer Training Corps, he enlisted as a private.

“As one of the cleverest of his family, he was the pride of his parents. After his death, his brother in law wrote to the authorities on behalf of his parents, stating that “they are at present too old and feeble to attend to arrangements” and noting that Harold had been supporting them with a sum of 20 shillings a week from the wages allowed to him by his former employers.”

He added: “I certainly support The Northern Echo’s campaign for a memorial. It will be a fitting tribute to all those men who lost their lives.”

While 18DLI saw action at Serre, 15DLI was involved in the battle north of Fricourt.

Remembering the Durham Pals on the battlefield where they gave their young lives
Help commemorate the sacrifices made by the men of the Durham Light Infantry at the Somme. In the month of July 2016, we are aiming to raise £10,000 to create a battlefield memorial to those who fell 100 years ago. To donate, either go to crowdfunding.justgiving.com/sommememorial and make a pledge, or send a cheque made payable to Former Charities of the Durham Light Infantry to The Rifles Durham Office, Elvet Waterside, Durham DH1 3BW.
Share on Facebook Share
Share on TwitterTweet
Share on Pinterest Share
Share on LinkedIn Share
Share on Digg Share
Send email Mail
Print Print
In News...