Respect for Pals’ bravery given a new benchmark 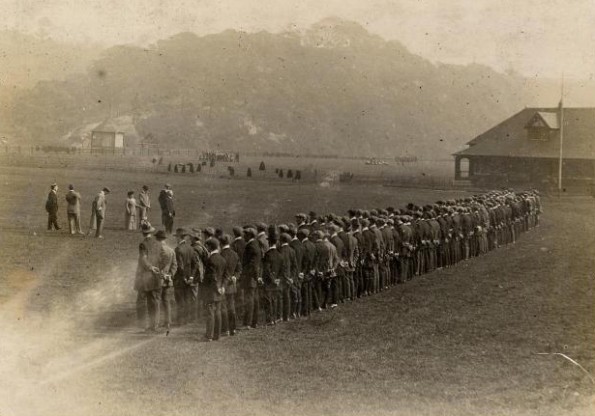 OFF TO WAR: The Durham Pals gather on the Racecourse, with the bandstand in the background, in September 1914 at the start of their war which, for many of them, would end on the Somme. Picture courtesy of Durham Record Office

BESIDE the bandstand on the banks of the River Wear, on September 24, 1914, the young men of Durham – all friends together – gathered on the grassy expanse of the Racecourse and took the first steps on a journey that would lead them, within two years, to the slaughter of the Somme.

“Standing here today, looking across the field, you can imagine them lining up,” said Colonel James Ramsbotham, chairman of the Trustees of the Durham Light Infantry, yesterday as, with the bandstand at his back, he unveiled a memorial bench to the Durham Pals who had laid down their lives in the First World War.

The bench on the Wear is identical to the one on the Somme which was unveiled on Monday, thus marking the beginning and the ending of the Pals’ wartime journey.

“In France on Monday, we felt their strife and suffering and sacrifice,” said Col Ramsbotham, “so it has been a very emotional week.” 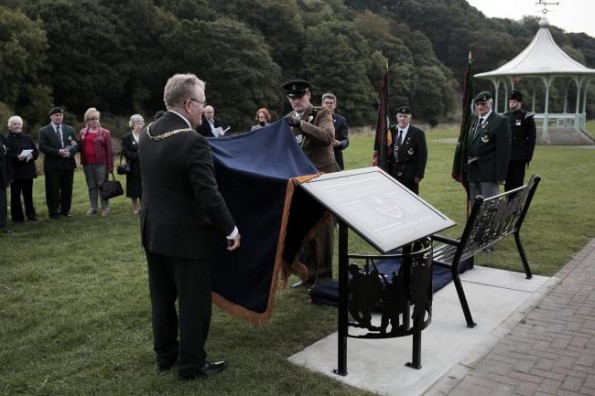 That morning in September 1914, when the order was given, the volunteers marched up the smart incline from the cricket pitch, wheeled right into Old Elvet and spontaneously burst into song. “We are all Pals,” they hollered to the tune of Auld Lang Syne.

That afternoon, they reached the grounds of Cocken Hall where they were soon joined by Pals from Darlington, Ferryhill, Barnard Castle and the Hartlepools. Together they began the training that would turn them into the 18th Battalion of the Durham Light Infantry and take them to the Somme in France. There, at the hamlet of Serre, on July 1, 1916, they were pitched into the bloodiest day in British military history – within 24 hours, 75 of them were dead and 250 wounded; over the following months as the battle ground painfully across a few miles of mud, hundreds more of them would be killed.

“It is with a great sense of pride and humility that I stand before you for this most poignant of commemorations on Durham’s riverbanks,” said Cllr Edward Bell, the council chairman yesterday as a little light rain fell from the leaden sky. “We are here to formally commemorate members of the DLI Pals battalion who fought and died 100 years ago.”

The iron benches, with an information panel beside them, are a joint initiative between the trustees, Durham County Council, the university, the cathedral and The Northern Echo, and have been funded by public donation. 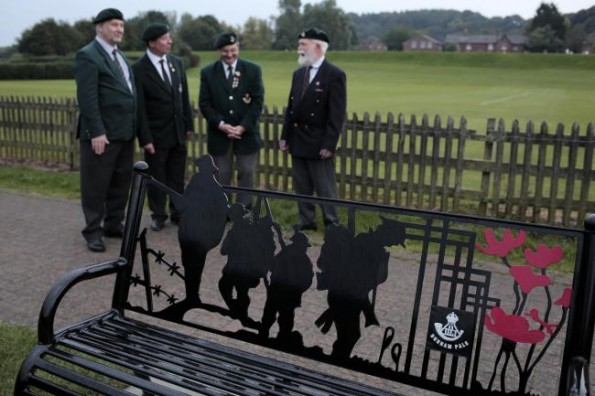 NEVER FORGET: Members of the DLI Association with the new Durham Pals bench

“It is right and fitting that in this 100th year their sacrifice has been commemorated, and I would like to thank everyone who has, through the pages of The Northern Echo and elsewhere, made this possible,” said Cllr Simon Henig, the council leader, after the Dean of Durham, the Very Reverend Andrew Tremlett, had dedicated the bench.

“It is very poignant,” said Gerard Kenny of the Stockton branch of the DLI Association. “It is hard to imagine how many families suffered heartache – brothers, sons, cousins and friends all going away and all wiped out in that day.”

Yesterday’s ceremony ended with the bugler’s Reveille echoing off the tree-lined slopes of the Wear and competing with the loud cheers of a rugby match in the distance and the rhythmical rowing of a women’s eight, driven on by their cox, on the river.

From the weathervane on top of the riverbank bandstand, old Father Time looked down on the cricket field, perhaps reflecting how he had dealt the Pals, who had first met on that grassy expanse 102 years ago, one of the cruellest hands of all time.