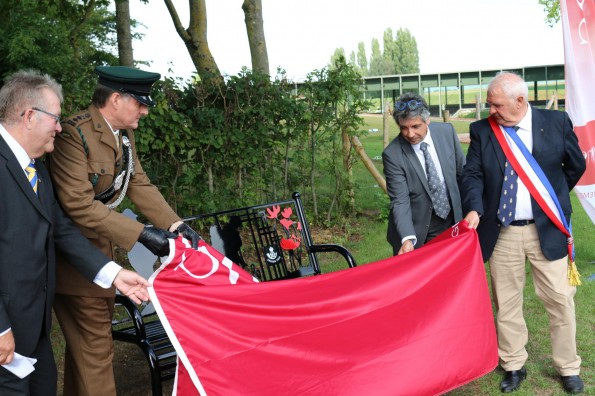 In a quiet, shady spot overlooking the gently rolling French countryside, a wrong going back 100 years was finally righted yesterday.

A bench commemorating the ultimate sacrifice of hundreds of Durham Pals was unveiled on the Somme, following a fund-raising campaign organised by a number of County Durham organisations, including the county council and The Northern Echo.

With the name of the 18th Durham Light Infantry wrought in the back of the bench, it is in the shadow of the giant Thiepval monument, which bears the names of the 76,000 British soldiers who died on the Somme but whose bodies were never recovered. 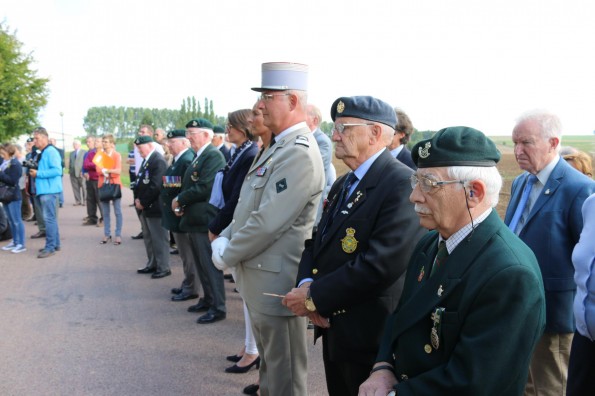 Guests at the unveiling of the memorial bench

“It means everything to us,” said Major Chris Lawton, the Rifles Regimental Company Secretary – the successor organisation to the DLI Association. “Our own County Durham Pals battalion, which was not recognised at the end of the First World War, is finally commemorated – and I hope this is just the beginning and in time we shall get a full stone memorial to them.”

The Pals battalions were groups of friends who were encouraged to join up at the start of the war.

“Many Pals battalions from across England came to fight on the Somme and all but Durham’s have some form of memorial here in this region where they died,” said Honorary Colonel James Ramsbotham, a DLI trustee. “We wanted to make sure the Durham Pals were also commemorated and a public appeal has paid for this memorial and an identical bench which will be place in Durham later this week.” 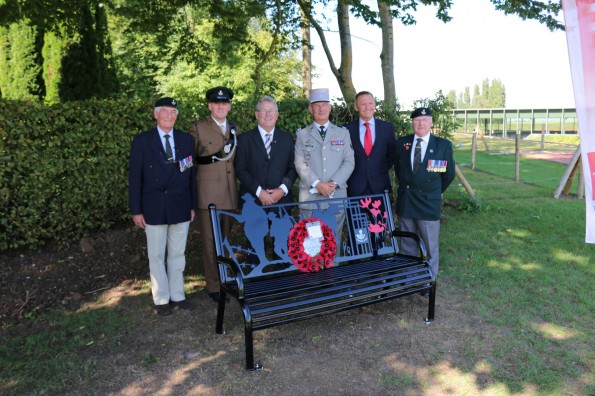 The other bench is due to be unveiled on Wednesday, September 20, 2016, by the River Wear in the centre of Durham, where many of the Pals began their training.

“From Durham Racecourse on the picturesque banks of the River Wear where they marched off to begin their journey to their final destination here at the Somme,” said Durham council leader, Cllr Eddie Bell, his voice breaking with emotion. “As I look around these beautiful and stunning settings, I recognise what a fitting tribute this site is to those brave souls who crossed the Channel into the unknown.”

Also instrumental in the fund-raising campaign have been the DLI Trustees, and Durham cathedral and university.

The leader of the Somme regional council, Laurent Somon, said: “The unveiling of the bench takes on a very special meaning during this centenary year of the Battle of the Somme. The bench here mirrors its English twin in Durham and is a metaphor for the unique Franco—Britannic friendship which links us together.

“This special century-long friendship between residents of the Somme and those of the British Commonwealth is perhaps the only good to have come from this awful battle.

“Our countries fought side by side. The battle became not only a human slaughter but also a material one, decimating this area and sadly it did not bring about the planned end to the conflict that the strategists had predicted.

“How could we forget that it was here in this region that the world was killing each other for such infinitesimal military gain? The result: a frightful loss of human life, more than a million dead, and the total destruction of this landscape, these villages and our culture.”

As the first bottoms touched the pristine paintwork of the new bench, a hot September sun broke out from behind the Picardie clouds. It illuminated a tranquil, rural scene, of green trees and brown, ploughed fields, with a little blue tractor pulling a trailer laden with turnips up the hill towards a farm.

The farm that can be seen from the DLI bench is Mouquet Farm – “moo cow farm” understandably to the British soldiers 100 years ago. Hundreds of Australian soldiers died defending the farm during the Battle of the Somme, and it is just a couple of kilometres away from Serre, where 80 Durham Pals were killed on the first day of the battle, July 1, 1916.

With the battlefields of Flers Courcelette nearby, where the DLI lost more than 700 men in a week of fighting in the war’s first tank battle in September 1916, it seems that every little hamlet and farmstead that now nestles peaceably in the gently rolling French countryside was the scene of indescribable slaughter 100 years.

There is much to ponder and remember when you rest in that quiet, shady spot on the new Durham Pals bench.