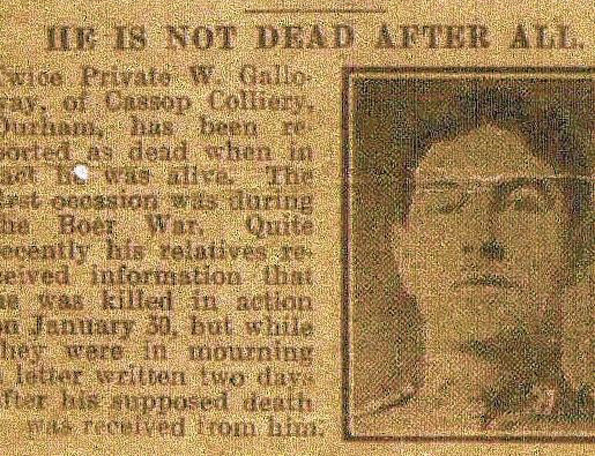 NOT DEAD: A newspaper reports the news that Walter is still alive after a letter written two days after Walter’s supposed death was received from him

WALTER’S family were twice wrongly notified that he had died in battle, leading to the marvellous newspaper headline “He is not dead after all”. The third time, though, was not so lucky.

Walter came from Cassop, near Durham City, and joined the Durham Light Infantry in 1899. He served in the Boer War in South Africa where he was reported dead.

He miraculously came home and was well enough to rejoin the DLI in August 1914, only for his family to learn that he had been killed on the Western Front on January 30, 1915.

“While they were in mourning, a letter written two days after his supposed death was received from him,” says the newspaper cutting in the possession of his great-great nephew, John Malcolm of Newton Aycliffe.

It is difficult to imagine the joy and relief that the family felt.

But eight months later they received a third report saying that he had died of wounds on August 10, 1915, near Poperinge in Belgium.

This time the information was fatally correct.