Welcome, welcome once again
Hero brave and bold
To the school where you were taught
In the days of old.

We the present pupils Of Wingate Catholic School
Were pleased to hear
When death was near
You were so brave and cool. 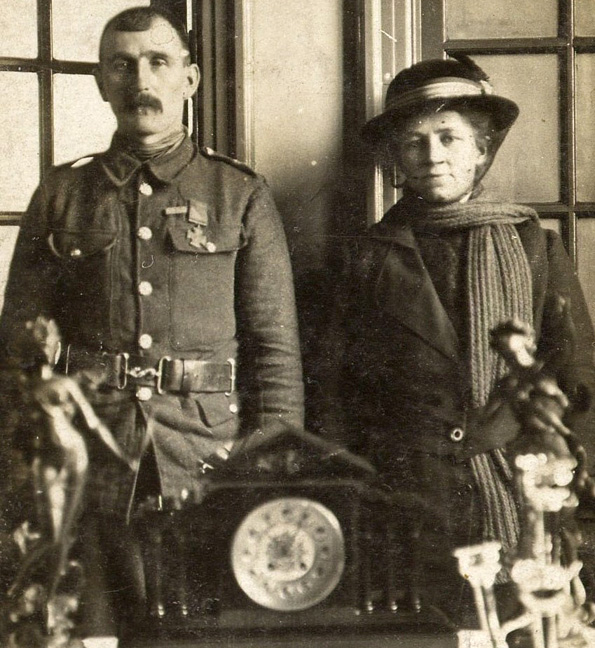 WHEATLEY WORTHY: Private Thomas Kenny with his wife, Isabel, receiving gifts at his old school in 1916

HAVING read their poem to their war hero that day in 1916, the Durham children then presented him with a marble clock, a pipe and some tobacco.

He responded modestly. The miner, who had been awarded Britain’s highest honour for bravery, mumbled: “All I can say is that I did my duty in France to the best of my ability.”

And then he was back to the mud and guts of the trenches, perhaps hoping he could slip back into anonymity.

Yet today, nearly 100 years after his act of valour, he is still remembered. He was, after all, the first member of the Durham Light Infantry to win the Victoria Cross during the First World War, and so he will be at the heart of next weekend’s commemorations in the village of Wheatley Hill, where he is buried.

He is Private Thomas Kenny, whom fate appeared to have intended for an unremarkable life.

He was born in 1882 in south Wingate, attended St Mary’s Roman Catholic School, and then became a quarryman and a miner, supporting his wife, Isabel, and their six children, who crammed into a terraced house in Walker’s Buildings.

Then, 100 years ago next week, war broke out, and Thomas did something extraordinary. 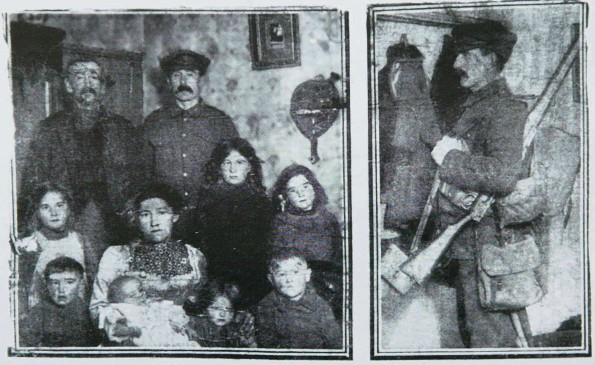 NATIONAL HERO: Private Kenny’s bravery was used as propaganda. These pictures were released to the newspapers by the Government with the caption: “The example of the married man: Private Thomas Kenny, the Durham miner VC, photographed with his wife and seven children and his father just before he bids them goodbye to go back and spend his Christmas in the trenches

Perhaps to escape the coalfield, he joined the rush to join up. In the first two months of the war, the DLI raised six strong battalions, each with more than 500 men, in Newcastle, and sent them by rail to train in Surrey.

Thomas was among them, although the training was rudimentary due to a lack of instructors, uniforms and rifles. However, a damp autumn turned into a wet winter, and as the new recruits were still living under canvas, the rain and the mud gave them a useful lesson about what was to come.

Thomas was in the 13th DLI, which landed in Boulogne, France, on August 26, 1915. The men marched about 50 miles east towards the Belgian border and found themselves under fire for the first time in the trenches near Armentieres at the end of September.

Immediately, all around Thomas were little instances of bravery and great big dollops of mortality.

On the dark, rainy evening of September 28, Private JW Jameson, who was unable to swim, somehow ended up in the swollen River Lys. Lance Corporal Robert Boagey jumped in and saved him, and was awarded the Royal Humane Society Bronze Medal.

On the other side of the coin, on October 19, Lieutenant Gerald Bailey, 21, from Hampshire, was killed in the trench. 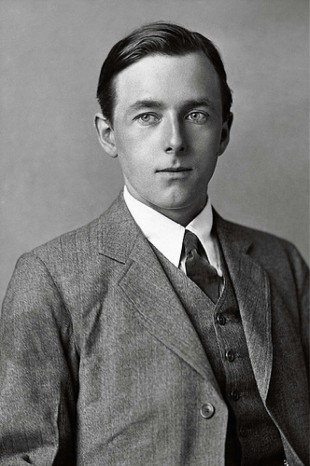 THE FALLEN: Lt Philip Brown, who Pte Kenny won a VC for rescuing

And Lieutenant Philip Brown, a Durham University lecturer, wrote in his diary: “About 12.30am, a man came and said he could hear moaning over the parapet. I was afraid that this meant that some of my men, who had just started on a listening patrol, had been hit.

“I went down with my observer, a very nice Irishman from County Durham who goes with me everywhere, and crept along a very shallow trench.

“We soon came on one man down in the bottom of the ditch. It was difficult to move him, but finally my observer got him on his back. Poor fellow had a bad wound in the side.”

The observer who went everywhere with Lt Brown was, of course, Pte Kenny. The two men had very different backgrounds. Lt Brown, four years younger than the Wingate miner, was from Kent and had graduated from Oxford University 1909. He’d become one of the first Workers’ Educational Association tutors in the North-East and had turned down the chance to return south and double his salary because he wanted to continue teaching in the pit villages. In fact, several of the men in the 13th DLI had signed up to serve with him.

On November 4, Lt Brown was the officer of the watch and needed to visit a working party out in No Man’s land, repairing the barbed wire in front of the trenches. At 9.15pm, he set off with Pte Kenny.

The rain at least had stopped but instead, the mud was covered in a thick fog.

So thick was it that they missed the working party and wandered onto unfamiliar ground.

They sat down and listened, hoping for a telltale sound that might lead them back to safety through the fog. 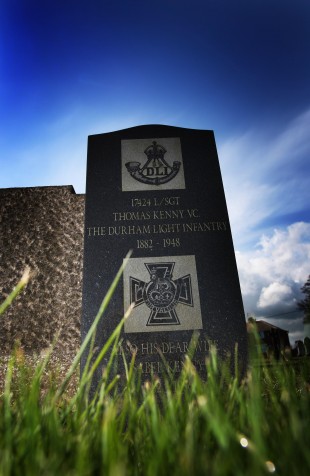 At about 9.45pm, they decided to move. As they rose, a single shot rang out and Lt Brown fell – shot through both thighs.

Pte Kenny immediately went to his aid, hoisting him onto his back, but now every German gunner in the district was training his fire on them. Pte Kenny collapsed into the mud and began to crawl, still with his badly injured officer on his back.

When the gunfire became stronger, he lay still, heart thumping. When it slackened, he resumed his slither, the debris left in the mud by the war cutting into his hands and knees. On more than one occasion, Lt Brown beseeched him to put him down and go it alone. Pte Kenny refused.

After nearly an hour, the miner stumbled into a trench that he recognised. He was cold, muddy, exhausted and bleeding, and his uniform was in tatters. He made Lt Brown as comfortable as he could and then went for help.

A LITTLE after 11pm, he reached Captain G White at the battalion listening post. Capt White called for volunteers to go into the old trench in No Man’s land to rescue Lt Brown. Privates Thomas Kerr and Michael Brough stepped forward. They hailed from the Stanley area of County Durham, and with the Wingate lad leading, they made it to Lt Brown.

The enemy were only 30 yards away and saw them. They fired rifles and machine guns at them, and even threw bombs, but the stretcher party returned to the 13th DLI’s trenches bearing the officer, weak from the loss of blood and drifting in and out of consciousness.

Then he closed them, and he died before he reached the dressing station.

His colonel wrote: “He was the most popular officer with both men and officers in the regiment, and his platoon were so angry that they could with difficulty be restrained from going out there and then to avenge his death.” 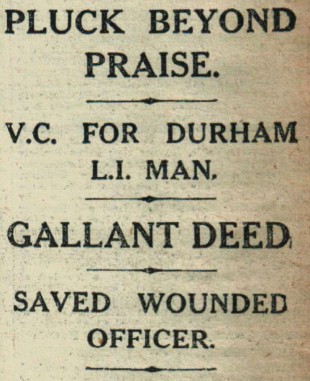 MAKING THE NEWS: From The Northern Echo of December, 1915, revealing Private Kenny had won the Victoria Cross

The Northern Echo’s front page of December 8, 1915, announced that for his “gallant deed”, Pte Kenny had been awarded the Victoria Cross.

It quoted the citation: “Pte Kenny’s pluck, endurance and devotion to duty were beyond praise.”

On March 4, 1916, King George V at Buckingham Palace presented Lance Sergeant Kenny – he had been promoted – with the VC. Watching was Lt Brown’s mother.

L Sgt Kenny then returned to Wingate to his wife and family – which, by now, had expanded to seven children. Before a full house at the Palace Theatre, the manager of Wingate Colliery presented him with £50 in War Bonds, which had been raised by local people, and then he went to his old school to hear the poem that the children had composed in his honour.

Then he went back to Christmas in the trenches.

Kenny was injured in October 1916, but fought on to the peace.

Post-war, there was little call for VC winners. He attended a garden party at Buckingham Palace in 1920 and a dinner in the House of Lords in 1929, but resumed his pre-war occupation underground at the colliery.

In 1927, he moved a couple of miles north to Darlington Street, Wheatley Hill, where he had a job in the colliery as a stoneman drifter, and in 1944, aged 62, a shoulder injury forced up into the daylight to work on the surface.

He died on November 29, 1948, aged 66, and was buried in Wheatley Hill Cemetery – a visit to this VC winner’s grave will be part of next weekend’s extensive commemorations in the village.