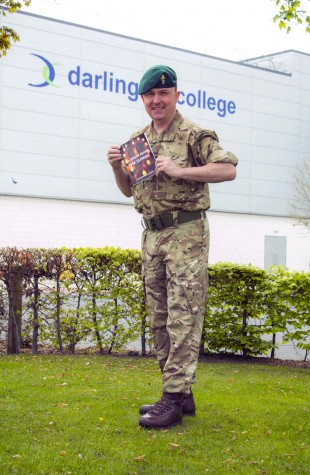 WAR NOVEL: Steven Corner with his new book, A Dream from the Somme

THE centenary of the First World War has inspired an Army reservist to transform a short story he wrote for a competition 15 years ago into a novel.

Steven Corner was awarded third place in the Sid Chaplain short story competition run by Shildon Town Council when he was 28.

But now, aged 43, he has used North-East landmarks such as Brancepeth and Durham castles as the backdrop to help expand on his tale.

A Dream from the Somme is a story of love and mystery set during the First World War, which begins in 1916 and leads to the present day.

“Finishing the book was inspired by the centenary of the First World War,” said Mr Corner. “I had some spare time on my hands and decided to extend it.

“The story begins during the Battle of the Somme, in 1916, when 20,000 British soldiers were killed on the first day.

“A soldier discovers a ring on the finger of a German soldier he believes he has killed, he takes the ring and gives it to the key character, and his future wife, Elizabeth, which is where the love story comes in.

“As the story unravels you learn where the ring has really come from.

“I had to let my imagination go wild to come up with an interesting story that takes you down several avenues.”

“My students aren’t keen on reading, but some of them have already bought my book to read,” he added. “My ambition was to get this story published to commemorate the First World War.

Mr Corner serves with 102 Battallion, The Royal Electrical and Mechanical Engineers (REME), based in Newton Aycliffe.

He said: “The regiments, the army speak, German and political history, so much of what I’ve learnt from being in the forces has gone into creating a book that is historical fiction, which includes true facts.”

All profits from the book between now and November will go to the Royal British Legion Poppy Appeal.

A Dream from the Somme is available from Amazon priced £5.99 for the paperback and £1.99 for the e-book.