Out of the frying pan into the fire 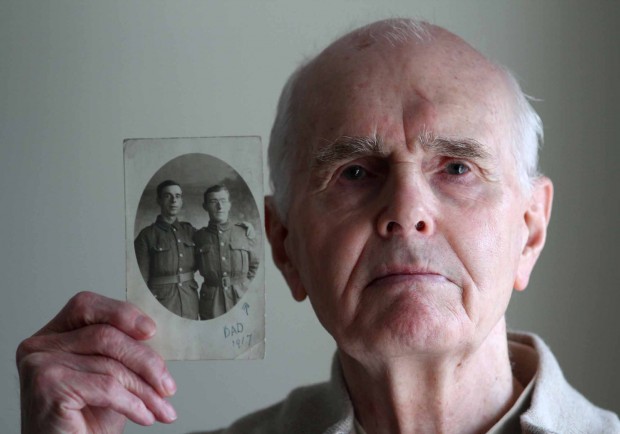 NOT A LOVELY WAR: Alan Weston with a picture of his father, Joseph, in his First World War uniform

HAVING been badly injured twice down Mainsforth Colliery, Joseph Weston decided to join up in 1917. Then, instead of being injured by the enemy, he found himself subjected to the torture of Field Punishment Number One by his own side.

“I used to ask him questions and he’d tell me one or two things, but he didn’t say much about it,” says his son, Alan, who lives in Chilton.

Joseph was born in 1895 in the Broom area of Ferryhill.

“He had his first accident in Mainsforth in 1914, when he got head and foot injuries in a fall of a stone,” says Alan. “When he recovered, he started working on bank (ie: the surface) and lost the middle finger from his right hand in a circular saw accident in 1915.”

Joseph could have spent the war in the mine but, perhaps realising it was just as dangerous as the battlefield, he enlisted in March 1917 and was sent to the 47th Company, Labour Corps in France.

“He was allowed home on leave from Christmas Eve 1917 to January 7 but he overstayed by ten days,” says Alan. “I’m not sure why, but he knew my mum, Hilda, by that time – they got married in 1921 – and that’s probably why.

“The police came looking for him in Ferryhill. He was arrested and transported back to France and court martialled.”

He was sentenced to 21 days Field Punishment No 1.

“He was tied to a gun carriage for several hours a day, then had to do pack drill, and he was fed on bread and water for 21 days,” says Alan.

FP No 1 was brutal. It was as much about humiliation as it was punishment, although in 1917, commanding officers were under instruction not to be too sadistic. The victim was tied hand and ankle to a stationary object (in FP No 2 they were handcuffed but still allowed to walk) for two hours at a time – sometimes in sight of the enemy, always in full glare of the weather, be it sun or, as in Joseph’s case that January, whatever winter could hurl at him.

“When I got older and realised how many people were shot for desertion, I think in one way he was rather lucky,” says Alan.

After his 21 days were up, Pte Weston returned to the ranks, and served until he was discharged on February 9, 1919.

He returned to Hilda, Ferryhill and Mainsforth Colliery.

“His left hand got trapped in some points, and he lost another finger.”

At least his hands were now balanced.

Even this did not deter him, and after recovering, he returned to the colliery and worked until he was made redundant in the 1950s.

Having somehow survived the slaughter of both the Great War and the Durham coalfield, Joseph’s extraordinary life came to an end in 1985, at the age of 89.