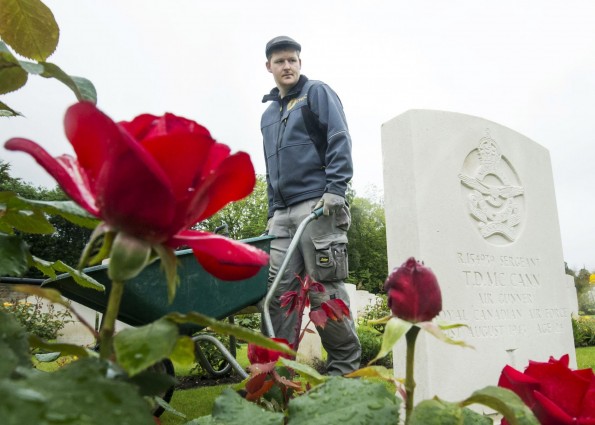 Garden Caretaker 1st Class Nick Holden at the Harrogate (Stonefall) Cemetery in North Yorkshire, where 23 First World War servicemen are buried or commemorated, as preparations are made to mark the Centenary of the Battle of the Somme on the 1st of July

THE country will fall silent on Friday to honour those who gave their lives in the bloodiest battle in British military history.

In cities and villages across the region, the sacrifice of thousands of ordinary soldiers killed or injured during the Battle of the Somme will be remembered to mark the centenary of the moment they went over the top.

More than 19,000 British soldiers were killed on the opening day of the slaughter and more than 38,000 were wounded, many of them friends who had joined up to serve together in the Pals battalions.

The battle raged in the mud of the trenches for four months and by the time it was over there were more than one million casualties.

Of the 15,000 soldiers of the Durham Light Infantry who fought at the Somme, more than half were wounded, killed or reported missing.

GUIDE TO BATTLE OF THE SOMME EVENTS

On Thursday evening Prime Minister David Cameron will join The Duke and Duchess of Cambridge and Prince Harry at the Thiepval Memorial in France, where 70,000 British and Commonwealth soldiers with no known grave are commemorated.

In London, the Queen and Duke of Edinburgh will join the congregation for an evening vigil at Westminster Abbey on Thursday.

A national two-minutes’ silence will take place at 7.28am on Friday, to mark the moment whistles sounded across the battlefield and young volunteers left their trenches to march towards the German machine-guns.

A bugler will sound the Last Post from the roof of Durham Cathedral on Friday morning, while motorcyclists from the Royal British Legion will sound a whistle at 7.30am to signal the start of a 24-hour charity ride around the North of England.

Their sacrifice will also be remembered at a special Evensong at 5.15pm on Friday.

The sound of a huge explosion will fill St Nicholas’ Cathedral in Newcastle at 7.28am to mark the moment mines were detonated along the battlefield, with Last Post sounded every half hour.

At 10am St Nicholas’ bells will be rung for an hour to mark bellringers who died in the conflict and a 7pm service will be held, including a small canister of soil from the Somme to be blessed by the Bishop of Newcastle, the Right Reverend Christine Hardman.

Dean of Newcastle, the Very Reverend Christopher Dalliston, said, “A century on, the extraordinary courage and terrible loss of a generation of young men, including thousands from Tyneside, remains imprinted on the national consciousness.

“This is a unique opportunity to recall the cost and tragedy of war, to pray for a world of peace and justice and to remember with thanksgiving all who have fought for our freedom and made undaunted the final sacrifice.”

Brancepeth: Free screenings of the 1916 film the Battle of the Somme will be show in Brancepeth Village Hall on Friday, July 1 at 2pm and 7.30pm.

Darlington: Celebrating Communities will hold a simple ceremony outside the Pease Monument at 11am on Friday, July 1.

Gainford: A short service is taking place at 7.30am at the war memorial at St Mary’s Church in Gainford on Friday, July 1.

Lanchester: Staff and students at St Bede’s Catholic School and Sixth Form Centre will hold a short service of song and prayer, followed by the scattering of poppies.

Meadowfield: A parade with a band and bagpiper will march from the Royal British Legion to St John’s Church at 10.40am on Sunday, July 3 for a service with a bugle.