AS the anniversary of the outbreak of the First World War looms, the extraordinary courage of a true hero of the conflict has been immortalised in bronze.

Former professional footballer Donald Bell was awarded the Victoria Cross for his exploits at the Battle of the Somme in 1916, but was killed just five days later in the thick of more fighting.

Now a historically-accurate statuette of his VC action has been commissioned by the Friends of the Richmond-based Green Howards Museum depicting his act of conspicuous bravery.

Second Lieutenant Bell was one of 12 Green Howards to be awarded the VC and was picked out as a “shining example of valour and sacrifice” for the commemorative statuette for the Great War centenary.

He was born in 1890 and educated at Harrogate Grammar School before training as a teacher in London where he turned out for Crystal Palace.

Back in Yorkshire in 1911 he taught at Starbeck primary school near Harrogate while playing football for Bishop Auckland and Newcastle United. He went on to play professionally with Bradford Park Avenue.

Soon after war broke out in August 1914 he became the first professional footballer to volunteer for the Army, joining up as a private at the age of 24. 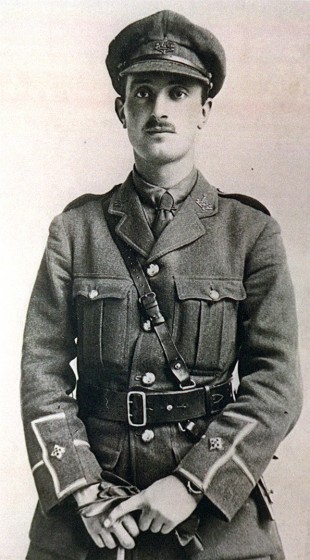 He was quickly commissioned into the Yorkshire Regiment – as the Green Howards were then known – before being sent to France.

There he was selected for the dangerous role of leading bombing teams and on the afternoon of July 5, 1916, was in charge of a small group of bombers who captured Horseshoe Trench, near Contalmaison.

A fellow Green Howard later wrote: “Probably no one else on the Front could have done what he did. Laden with steel helmet, haversack, revolver, ammunition and Mills bombs in pouches, he was yet able to hurl himself at the German trench at such speed that the enemy would hardly believe what they saw.”

Five days later he was killed in a similar action nearby and the site of his death is now marked by a memorial erected in 2000 by the Green Howards and the Professional Footballers’ Association, which now owns his VC.