The duchess and her ‘boys in blue’

This is the little known story of Prince Charles’s great-aunt, who cared for injured troops in Harrogate during the war. Ruth Campbell talks to the man who
uncovered the tale of the caring Russian aristocrat. 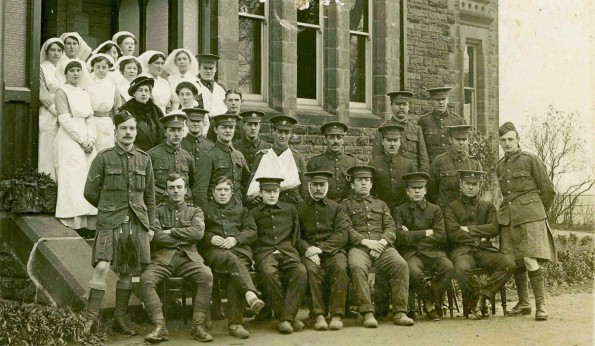 SHE may have been the daughter of the King of Greece, the cousin of King George V and have married into Russia’s Imperial family, but this was one Grand Duchess who didn’t mind getting her hands dirty.

Indeed Her Imperial Highness, Marie Georgievna Romanova, commonly known as Grand Duchess George, would often roll up her sleeves and get stuck into the cleaning at one of the hospitals and convalescent homes for wounded soldiers she set up in Harrogate when she was stranded there during the First World War. On one memorable occasion, she and the King’s sister, Princess Victoria, were even seen carrying an amputated leg out of an operating theatre. 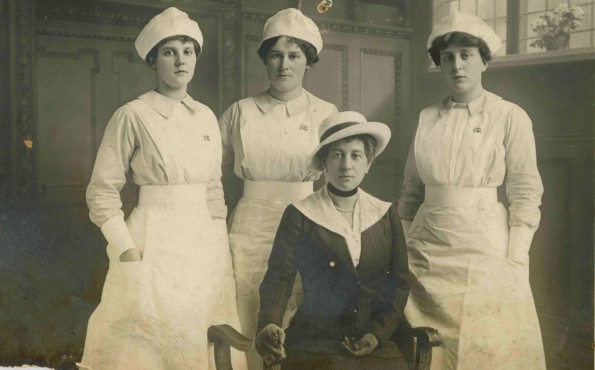 The duchess with staff at the hospital in Harrogate

So dedicated was she to tending soldiers in her care, she repeatedly caught lice. But that was a minor inconvenience to the foreign aristocrat whom this North Yorkshire spa town, and the 1,200 wounded soldiers she cared for, took to its heart.

As one of her two daughters was a poorly child, the family regularly travelled to Harrogate for its bracing air and to visit the fashionable Royal Baths, renowned for their health properties. Like minor celebrities, she and the princesses, Nina and Xenia, were often mobbed in public. 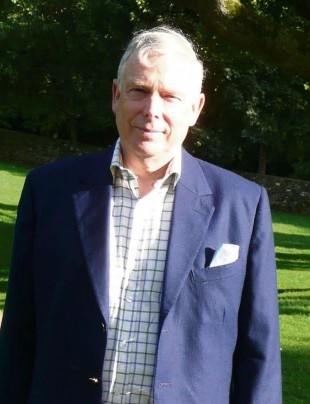 The public loved stories about her holidaying with the Kaiser in Crete, picnicking with the Tsar of Russia and dining with George V in Buckingham Palace. “She was actually quite a quiet, retiring character. They were all just family to her,” explains Malcolm Neesam, a retired North Yorkshire librarian, who was granted access to fascinating personal letters between the Grand Duchess and the King, held at Windsor Castle.

Sadly, oblivious to the rapidly deteriorating relationship between Britain and Germany, the Grand Duchess failed to see disaster looming. Her story took a darker turn as she arrived in Harrogate on the fateful day of August 4, 1914. Although the clouds of war were gathering, the thought that she would never return to Russia never crossed her mind. That day, she dropped in on a garden party in town. By 11pm, Britain had declared war on Germany.

“Feel completely crushed and so anxious,” she wrote in her diary. “A real hell of a position. May God have pity on His world.” 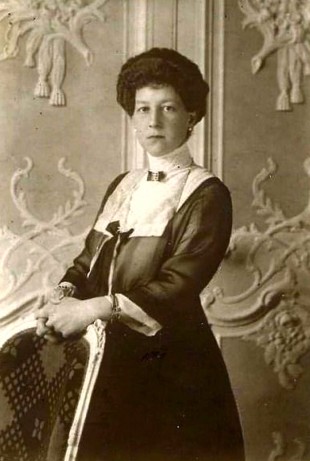 Deeply religious and with a strong sense of duty, within days of becoming stranded in Harrogate she set herself the task of establishing her first military hospital. “As a member of the Russian Imperial family, she could have lived in any European palace, but within three days of war breaking out, she was busy raising funds,” said Mr Neesam. “It was unbelievable.”

Within six weeks, she had converted a private house into a 12-bed hospital, appealing for beds and linen, recruiting locals as nurses and enrolling a Leeds doctor to grant their Red Cross qualifications.

She also enlisted some of her relations to help. One wounded soldier came round after surgery, puzzled to see a rather grand lady standing by his bed. “I am Princess Margaret of Denmark,” explained his nurse. “And that is Princess Victoria, the King’s sister.” The soldier asked who the third nurse was: “Oh, that’s the Grand Duchess George of Russia.”

The soldier looked aghast: “Blimey,” he proclaimed. “We really are among the nuts.” 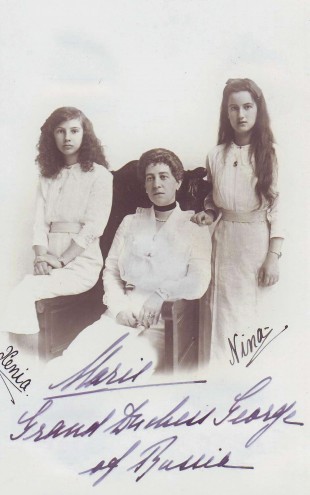 Grand Duchess George with her daughters

By today’s standards, her hospital may have been primitive but those who worked there, including a doctor recruited to perform amputations in a rudimentary operating theatre, were highly trained in the science of the time.

And when the War Office objected to a foreigner running a hospital, the King, who was so impressed with her work he presented her with the Royal Red Cross in 1915, came to her defence.

Throughout her time in Harrogate, she asked permission to return home to Russia many times, but was deterred by the King. “I felt my place was really there,” she said.

She wrote every day to her husband, Grand Duke George, and must have been devastated when he was shot dead by the Bolsheviks in 1919. Concealing her own torment, she continued to throw herself into her good works. “She just kept going,” says Mr Neesam. “She had an indomitable will.”

The Grand Duchess wasn’t always welcome in London society, where she faced some resentment and suspicion, and even one call to deport her. But she certainly won over the people of Harrogate, where she fought for as many wounded local soldiers as possible to be brought back and treated in their home town.

Her Tommies, or “boys in blue” as they were known, after she bought them all matching blue uniforms to wear during recuperation, were clearly immensely fond of her.

The Grand Duchess went on to open two more hospitals and a convalescent home.

The last patient left the hospital in 1919 and by 1922 the Grand Duchess had married a Greek and moved to Rome. In one room in her Italian apartment, she displayed a host of framed photographs of her hospitals in Harrogate, of wounded soldiers and of their letters of thanks.

A journalist who visited her there in 1940, just a few months before she died, described it as “a shrine” to her time in the town.

While she never forgot her “boys in blue”, they, too, would always remember her. One wrote to her after returning to the Front following seven months in Harrogate: “I was very much disappointed when I left without seeing you. It caused me more pain than all I had gone through, as it was leaving home.”