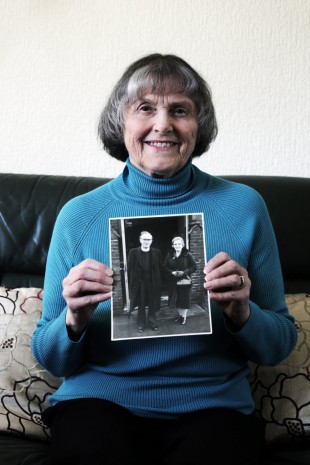 TRAIN ORDEAL: Ann Oliver of Sedgefield with a picture of her aunt, Mary Stainthorpe, who was stuck on a school train in the middle of the Hartlepool bombardment

Early morning on December 16, 1914, Mary Stainthorpe, 13, was among an excited hubbub of children boarding their usual train taking them from their colliery homes in Durham to their grammar school at the coast.

ONLY that morning the train didn’t take them to school in Hartlepool.

Instead it carried them to the heart of the First World War, with shells exploding all around them and the dead and dying on all sides.

Before Mary died in 1985, she wrote an account of the day the war exploded into her life. That account is now in the possession of her niece, Ann Oliver, who lives in Sedgefield and who often heard Mary’s dramatic story.

On December 16, 1914, the train wound its away around the east of the Durham coalfield, picking up children from Thornley, Wheatley Hill, Shotton Colliery and then Wellfield, near Wingate, where Mary’s father, John, was stationmaster.

As she boarded, she could hear what she thought was thunder in the distance. With no reason to fear a thunderstorm, John let the train depart on time.

They picked up more young passengers at Castle Eden, Hesleden and then Hart, with the thunder growing louder and closer with every stop.

From Hart station, the children could see the sea. And they could see three warships which appeared to be firing at each other.

“The train moved on,” wrote Mary, “the children leaning from all the windows, watching what they thought was a naval battle.” 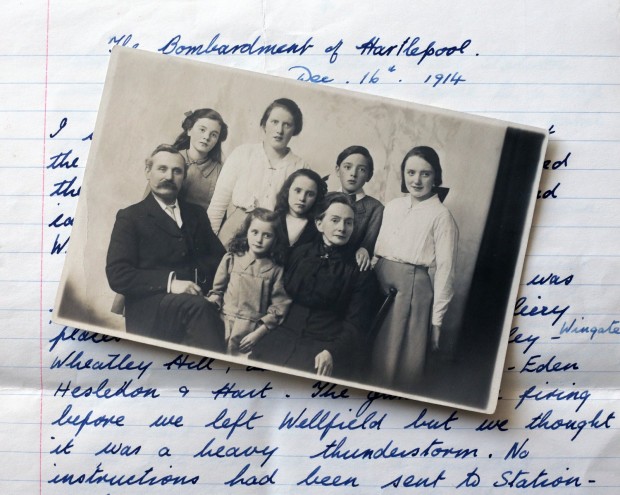 EYEWITNESS: Mary Stainthorpe is far right on this 1920s family picture; beneath is her handwritten account of the bombardment

Only, of course, it wasn’t a naval battle. The three German warships were in fact firing on Hartlepool. By the time the train rattled along the tracks, the ships had been shelling the town for a good 20 minutes.

The first shell, fired by the battlecruiser Seydlitz, had landed at 8.08am at the Heugh battery on the Headland, killing four members of the Durham Pals outright (including Corporal Alix Liddle, of Darlington, whose story was told in Memories 157 and who may have been the first soldier to die on the British mainland in the war).

The Blucher and the Moltke followed the Seydlitz and opened up, firing shells weighing up to 1,000lbs at the fragile brickwork of the seafront residents’ terraced homes. It was a brutal attempt by the Germans to frighten British civilians out of their complacent belief that the war would be over by Christmas. The docks, shipyards, gasworks and railway stations were also targeted.

About 123 people died that day in Hartlepool – plus another 70 or so down the coast in separate attacks on Scarborough and Whitby.

And, having left Hart station about a mile or so from the Heugh, Mary’s school train came to a rest in the middle of the war zone – beside the gasworks.

“About midway between Hart and West Hartlepool, the train came to a stop on an embankment where the sea came closer to the railway,” she wrote. “The ships were firing on one side and the gasometer blazing on the other. We children did not connect the two, until the guard came running along the train saying that shells were passing over us and we had to get down on the floor.” 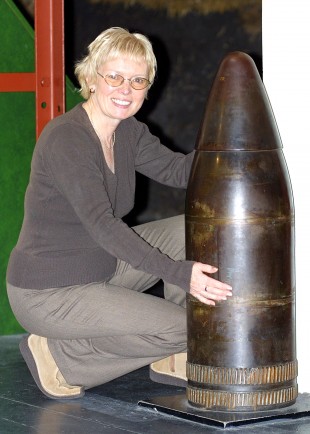 SHE SELLS SEA SHELLS: Museum assistant Mavis Garnett with one of the largest shells which landed in Hartlepool

There they laid for 20 minutes with shells exploding over their heads, and their stationary train in full view of the warships – a sitting duck.

Amazingly, at 8.52am when the three ships ceased firing and slipped back into the sea fret, the school train was unharmed.

“It slowly pulled into West Hartlepool station, passing the burning gasometer on the way,” wrote Mary. “We usually changed to an autocar to be taken to Henry Smith Grammar School in Old Hartlepool, but we left the train to be met by two of our schoolmasters.

“They had taken shelter in a café on the seafront and had had the roof blown off over their heads. They were half dressed and dirty, but at the time we were frightened and glad to see them. They showed us a shell hole in the station wall, and told us there were no trains running to take us home and no telegraphic communications.

“They said there was no use trying to get to school as it was being used as a temporary hospital.

They said that shells had fallen on our hockey field and killed our pet donkey, and a shell had hit the headmaster’s house, though he and his family were safe.

“Our beloved Latin mistress was killed as she got ready for school.

“Our masters advised us to walk home, and the long trek to the villages began. As we went, we saw devastation – shops with broken glass, damaged houses and people being taken on stretchers to ambulances.

“Late that afternoon, little struggling groups of children began to crawl back into their villages, hungry and footsore.

The older ones had carried the little ones on their backs, or two of them had made a chair with their hands to carry them.

“I was seen walking by a railway friend of my father who put me on the four o’clock train home. When I got there, I found my mother weeping – something I never forgot. Whether it was from joy or anxiety, I do not know.”

After the war, Mary’s father was promoted to stationmaster at Nunthorpe. She became a teacher, married a Methodist minister, the Reverend Andrew Thornton, and spent the last part of her life in Hartburn, near Stockton.

ALL three gasometers belonging to the Hartlepool Gas and Water Company were destroyed by the bombardment. This must have added insult to injury as the townspeople, sitting in the roofless rubble of their half-demolished houses, were left without light or heat for several days. It was a wet December.