The voice of a First World War soldier, left for us from beyond the grave, has been found on tape in the home of a writer in the region. Chris Webber heard the old soldier and Communist tell his own story. 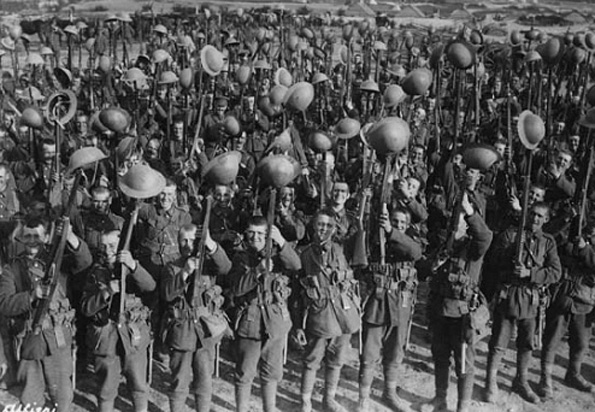 BRAVE FACES: Durham Light Infantry men during the First World War, when the full mental impact of war was yet to be felt

THE words of old soldier Frank Feeney, unheard for 40 years, spill out from the old tape recorder.

The voice is distinctly Teesside but the vocabulary is almost courtly, and the casual, matter-of-fact tone is in direct contrast to the dramatic stories of being blown up, covered in blood, only to be later stoned by women and children while being force-marched as a prisoner-of-war.

It is the first time Mr Feeney’s story has been heard since Billy Yull, a writer now based in Hartlepool, recorded it some time in 1975 or 1976, along with about those of 20 other veterans, for research purposes.

Those other tapes, carefully boxed up, were stolen from Mr Yull’s home decades ago and were doubtless destroyed by people with no idea of the real value of what they had.

Mr Yull says that, as a hopeful young writer, he was researching a television play concept he had for a TV mini-series about the war, and laughs as he recalls how the old men he interviewed would talk loudly at his primitive tape recorder microphone, staring right at it.

“I always asked them about ‘going over the top,’ recalls Mr Yull, whose own grandfather fought in the war, recalls. “You know, ‘how did it feel?’ All of them, without exception, just said, ‘well, nothing, I didn’t feel anything.’

“But then some of these old guys would start to cry. All the old memories coming back.”

Mr Yull remembers the stories, if not always the names, of those old soldiers in the lost tapes. Old men quietly telling of 60-year-old traumas over tea in their quiet old people’s homes.

There was Oliver Lowe, from Park End, Middlesbrough, who served with the King’s Own Cavalry and who fought on the first day of the Somme, the most catastrophic day in the history of the British Army.

“He said they were told there would be no resistance because of the shelling,” says Mr Yull. “They ended up crawling over bodies. He said there were bodies with ‘balls of black’ in their mouths – the flies.

“He had stories about the first Christmas Eve, the so-called ‘truce.’ He said the Germans sang Silent Night and were shouting, ‘we are your cousins: we are Saxons.’ But they didn’t go over to meet them. He said the Northumberland Fusiliers did and got into trouble.”

Other old soldiers told of being tortured by the whinnying of horses which didn’t realise they had lost their legs.

One, a man named George, of Cannon Street, Middlesbrough, remembered a comrade, a fellow Teessider, who would jokingly shake the hand of a skeleton in the trench, raising a laugh amidst the horror. One day he forgot and he turned, only to be hit by a mortar. Mr Yull was able to tell the dead man’s grandson, who he knew, how his ancestor died.

The same veteran had to clear up after the Armistice in November 1918. He and fellow soldiers came across skeletons, one a German and one a Briton, who had bayoneted each other. They were left in grisly embrace, the bushes growing around them. “I remember he said a shovel was a more effective weapon than a bayonet in a trench,” Mr Yull says.

Another veteran, Tommy Plummer of South Bank, had haunting, ethereal memories that stuck in the mind. “He said there was a freak weather condition, where it snowed but you could see all these red poppies through the snow, really strange, he never forgot it.”

A clue about how attitudes of the time began to be changed by the war, came from a man Mr Yull interviewed in Grangetown, near Middlesbrough. “He joined up right at the beginning,” says Mr Yull, “but lost his right arm from his elbow. He had a hook, but would hide it, tucked in his coat. Of course he was invalided home. He took a train to Redcar on a cold and misty day and was stood on the pier. A woman came and gave him a white feather. I said, ‘why didn’t tell you tell her you’d been at the front?’ he just shrugged. He said he opened the window on the train on the way home and let it go.”

With that, Mr Yull produces the one remaining tape – Frank Feeney’s. He remembers Mr Feeney telling him he “got political” after talking to Russians, fellow prisoners-of-war, and became a founding member of the North-East Communist Party, long-since defunct.

“When the war was finished and he was still in the Army he tried to organise a strike,” says Mr Yull. “They wouldn’t demob the men and it caused resentment; ‘the war’s over we want to go home’, they’d say.

“He said a few hundred of them were rounded up and herded into trucks and taken to Salisbury Plain. When they opened the back of the trucks there were machine guns pointing at them. The strike ended right there.”

In fact that story and the information about the political journey Mr Feeney went on, isn’t on the tape I’m given. It’s Frank Feeney all right but his fascinating story stops half way through.

In his thoughtful way Mr Feeney remembers a “tremendous patriotic fervour – regardless of class” breaking out at the beginning of the war. Caught up in that, like everyone else, he nevertheless was too young to join up until three years later. By then the patriotic fervour had changed to something more profound. “The casualties came home,” he said. “Even the dullest imagination got to know the cruelty of the war.”

Mr Feeney, assigned to a West Yorkshire regiment, tells ofis quite vague, no doubt due to shock, about the moment he experienced about being blown up during the Germans’ last great 1917 offensive. He was 18 and had just been told to ‘bugger off’ by fellow soldiers, more experienced, hiding behind trees who thought the greenhorn could be seen. After the shell exploded, he remembers being captured, “lying in a ditch, on top of someone who had been killed. When I came to, there were Germans all around, looking down at me. The water was all blood.”

The experience of being a prisoner of war is calmly told without emotion, but still harrowing. Hundredsof prisoners were packed in a fortress so tightly they could barely sit, or even squat.for days at a time. Barrel tubs of excrement and urine overflowed, food and drink were scarce.

Later, he was picked out with others, and force-marched through, he thought, Hamlin, “or a town a bit like Guisborough.” The townsfolk, “mostly women, old men, some children” lined up, both sides of the street, and pelted us with everything, bricks, stones, some got it really bad.”

In a lighter moment, he remembers some fellow prisoners getting one over the Germans. A lot of the British solders had new coins, so shiny they looked like gold. “They kidded the Germans it actually was gold and got parcels of all this black bread. We tired tried it, but ended up with a parcel of bricks.”

He starts to recall meeting Russian prisoners and hearing about the revolution but, tantalisingly, the tape cuts out.

The steady voice of an ordinary man, forever changed by war, haunts the memory.