How Winnipeg the bear went to war 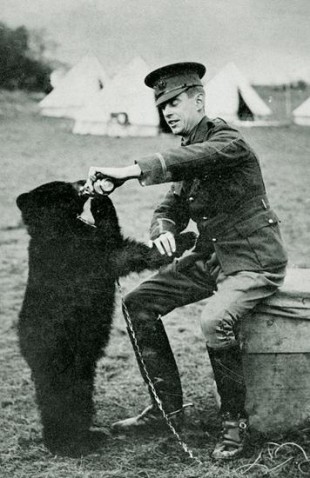 I HAVE travelled from the Somme to the Wear this week looking at riverbank benches. They have been installed, partly through the generosity of readers of The Northern Echo, to commemorate the sacrifices made by the Durham Pals in the First World War.

The artfully-designed benches are surprisingly apt memorials. On Monday, one was unveiled at Thiepval, near the soul-crushingly vast monument to the 76,000 men whose bodies were never recovered from the mud of the innocent-looking fields around. At least 150,000 people visit Thiepval every year, and yet the DLI bench is the only place for them to rest – I know this from sore experience, as I spent an hour on the concrete floor writing my article as there was nowhere else to sit.

On Wednesday, an identical bench was unveiled on the Racecourse riverbank in Durham City. This was where the Pals first gathered in 1914, and so it marks the start of their journey just as the one at Thiepval marks the end.

It is placed between the bandstand and the statue of the Dun Cow on a long, straight stretch of the Wear. Runners, dogwalkers and cyclists exercise along the towpath; rowers get their rhythms right in the river, rugby kickers and softball hitters play on the fields around, yet the DLI bench is the only place for anyone to sit.

It will be used, and so they will be remembered.

During my travels, I heard many war stories, but none as curious as the one told by Colonel James Ramsbotham, chairman of the DLI Trustees. Standing in the sun around the Thiepval bench, talking of how even today the First World War colours our lives, he told a story I’d never encountered before of Lieutenant Harry Colebourn, a vet, who initially joined the Canadian Army Veterinarian Corps to look after cavalry horses.

In his diary on August 24, 1914, he wrote: “Left Port Arthur, 7am, on train, bought bear, $20.” The train had stopped at White River, Ontario, where someone was hawking an orphaned female cub whose mother had been shot by hunters. The sight melted their heart of the vet, and he named his new pet Winnipeg after the city he was leaving behind.

On October 3, Winnipeg, Lt Colebourn and thousands of members of the Canadian Expeditionary Force sailed for England and camped on Salisbury Plain. Winnipeg became established as the brigade’s mascot and she followed the soldiers around like a dog as they practised their drills.

On December 9, the Canadians were ordered to the battlefields of France – but brigade headquarters specifically forbade Lt Colebourn from taking that bear on the boat. So he borrowed a car and drove the bear to London Zoo, where he left her, promising to return at the end of the war to take her back to Canada.

However, Winnipeg – known as “Winnie” for short – quickly become a zoo favourite, so trusted that young visitors were allowed to ride on her back. Therefore, at the end of the war, Lt (by now a captain) Colebourn left her happily there.

Among the visitors in the early 1920s were the writer AA Milne – himself injured in the Battle of the Somme – and his son, Christopher Robin. The young boy was so taken by the tame Canadian bear that he changed the name of his toy bear from Edward to Winnie and so, with the help of a swan named Pooh, a British institution – first published 90 years ago next month – was created from the debris of the war.