Can you help identify these angels of mercy? 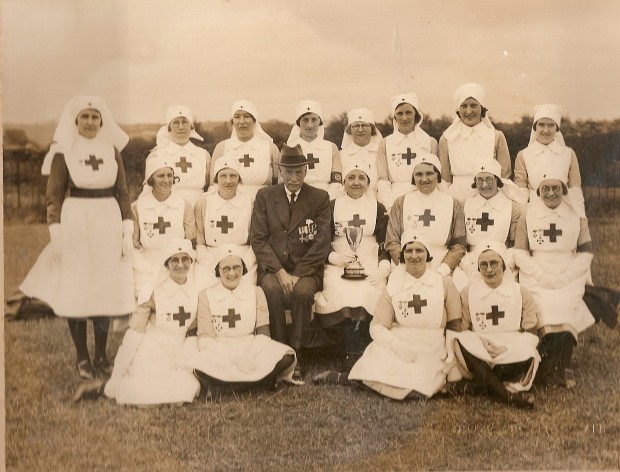 WHOS WHO? A picture, apparently taken by The Northern Echo, showing VAD nurses at Masham receiving a trophy from a Dr Cockroft. More information on this, or any VAD nurses, is most welcome

ANNE WALL is writing a book about the First World War VAD hospitals of the North Riding of Yorkshire. She has recently uncovered this splendid picture of VAD nurses at Masham, but still would like more information.

The Voluntary Aid Detachment, or VAD, was formed in 1909 by the War Office with the Red Cross and the Order of St John of Jerusalem training volunteers – usually middle class women – in basic nursing.

When the war broke out, there were tens of thousands of VAD nurses. They helped out in hospitals and some worked in field hospitals on the Western Front, although they weren’t really trained for frontline work.

The VADs really came into their own when convalescent hospitals were set up in any appropriate building that the Government could commandeer – stately homes, village halls, old schools. . .

One in Northallerton was in county hall; in Middlesbrough, the old workhouse was pressed into service.

Most were near railway lines so that injured soldiers, who were on the road to recovery, could be transferred from major hospitals.

Anne has discovered that there were 32 VAD hospitals in North Yo rkshire.

Some are well recorded; others are not so.

For her book, which is being produced in conjunction with the county council and the Red Cross, Anne would love any information on the VAD hospitals at Holgate in Middlesbrough, Cliffden in Saltburn, Red Barns in Redcar, Challoner in Guisborough, Ayton Firs in Great Ayton, Baldersby Park in Topcliffe, Masham, Weston Hall in Scarborough, Wharton Hall in Skelton, and Stanwick Park near Darlington.

Either email Anne on anne@wallfamily.demon.co.uk, or get in touch with Memories (see top of page) and we will pass your information on.