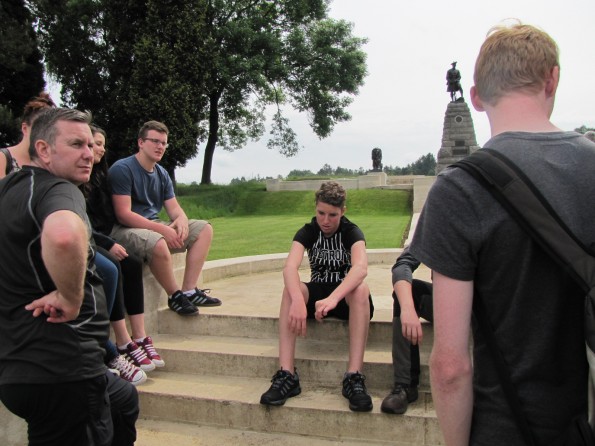 HARSH REALITY: Students and staff comprehend the enormity of World War One during a visit to The Somme

STUDENTS at a Teesside college had a lesson in the harsh realities of war when they visited The Somme to mark the centenary of World War One.

The students from Redcar & Cleveland College visited the war graves and museums in Belgium as part of their project on the Great War.

The teenagers, who are studying Public Services, have spent the last year researching the lives of former pupils from Sir William Turner’s boys’ school in Redcar, who saw active service during the 1914-18 war.

More than half of the school’s 80 old boys who went to war died either on the front line or as a result of their injuries, with some never being found or identified.

One of their subjects was John Duncan Stubbs, from Nunthorpe, who left Sir William Turner’s School to join the Navy when war broke out. 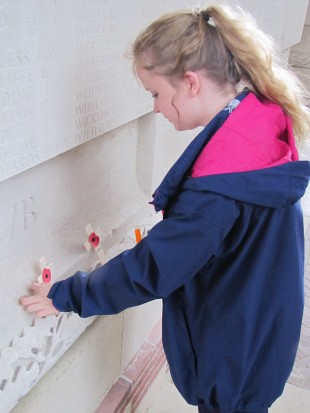 PAYING RESPECTS: Student Kirsty Bagley places a cross at the Thievpal Memorial in memory of the missing

He survived the bombing of HMS Aboukir and was celebrated for helping to rescue some of his comrades but he died at the age of 15 when HMS Cressy was torpedoed.

Student Poppy Harford, 18, from Redcar, said the trip took them to Flanders Field, Essex Farm, Vancouver Corner and The Menin Gate Memorial to the Missing in Ypres, as well as numerous war cemeteries.

She said: “It was a very emotional trip. I don’t think any of us were expecting to feel so moved by what happened almost 100 years ago.

“We stood by the grave of a 13-year-old boy from Ireland who had volunteered to go as a drummer boy. When he got there they didn’t need a drummer boy, so they sent him to the front, where he died. It was incredibly sad.”

Alex Conway, 20, from Redcar, said many of the soldiers who died were two or three years younger than him.

“There were so many things that touched us but just the sheer number of graves was perhaps the thing that hit home the most to me,” he said.

And student Hazel Mason, 18, from Middlesbrough, said: “I think the sight of countless white headstones will live with me forever.”

Samantha Gavaghan, the college’s Learning Resource Centre Manager, said the students were involved in a range of activities to commemorate the anniversary and would be working with local groups on remembrance events, including an exhibition on the college campus.