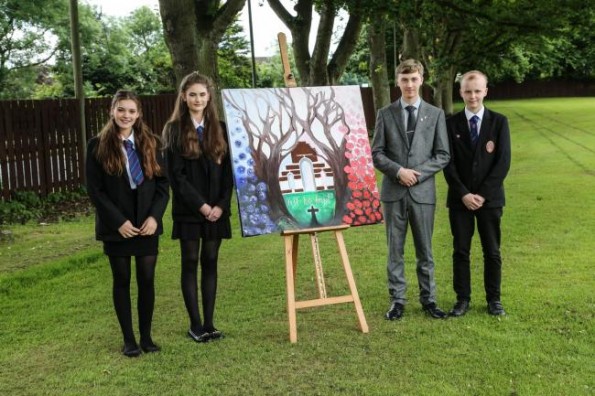 YOUNGSTERS from the region will be among a national schools delegation travelling to France next month to commemorate the centenary of the Battle of the Somme.

A special service held on Friday, July 1 will include members of the Royal family, veterans, military and community representatives and government officials from around the world.

And of 300 young people chosen to represent the UK and Ireland, a third will come from County Durham.

Pupils from St John’s School and Sixth Form College in Bishop Auckland, The Hermitage Academy in Chester-le-Street, Villa Real School in Consett, Greenfield School in Newton Aycliffe and Wolsingham School will be part of the ceremony to mark one of the bloodiest battles in history, as a sign of hope and commitment to not suffer such loss again.

It will be the culmination of a six month project with a school from the Somme region which has included the creation of artwork that will be brought together during the trip.

Durham County Council’s cabinet member for children and young people’s services, Ossie Johnson, said: “This provides an incredible opportunity for our young people to better understand the consequences of one of the most costly battles in terms of human life.

“It is a privilege for the county council to be so heavily involved in this national commemoration and I am delighted that one third of the young people from the UK who will take part in the event are from County Durham.

“This is testament to the strong links which the county has with our partners in the Somme and to the exceptional educational links which bind our two communities.

“In order to develop a lasting legacy for the centenary, we plan that these links will continue into the future.”

Wolsingham pupil Pheobe Thompson, who has helped set up the ceremony, said: “I am really excited to visit the Somme especially as my brother Ben is working there with the Royal Signals.

“It’s an amazing opportunity to learn more about the battle. My great-grandad is on the memorial there so I will look for his name.”

The costs of the visit are being met by central government.

Cllr Johnson added: “As living memory of this battle dies, engagement with young people is essential to sustain awareness of the significance of World War One, and the importance of UK-France relations in continuing peace and stability in Europe.”