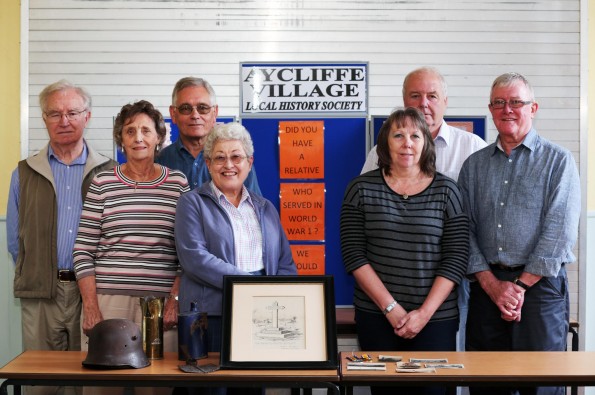 A HISTORY society will lead a series of commemorative events to mark the centenary of the First World War following a £10,000 research project.

Over the last year, Aycliffe Village Local History Society has been working hard to discover how the Great War affected the people of Great Aycliffe, Brafferton and Coatham Mundeville.

And on Saturday, September 13, and Sunday, September 14, from 10am to 4pm, the historians will showcase the results of their biggest project to date at an exhibition in Aycliffe Village Hall.

A week earlier, at 3pm on Sunday, September 7, the Reverend Christopher Pearson will lead a short service on the village green, with society members, dignitaries, veterans and Scouts expected to attend.

It will see Wendy Hillary, the Mayor of Great Aycliffe, and history society chairman, Harry Moses, plant two trees to commemorate the centenary of the First World War.

The project, funded by the Heritage Lottery Fund’s First World War: Then and Now programme, encouraged the community to honour and reflect on local people who experienced the 1914-18 war, at home and on the battlefield.

The historians started by researching the 13 names listed on the village war memorial but soon widened their search to include the ancestors of residents past and present.

As well as providing information on more than 240 people, the exhibition will feature photographs, newspaper cuttings, documents, letters, keepsakes and war memorabilia.

New IT equipment has enabled the group to create an online database, while a book, The Great War: Great Aycliffe, Brafferton and Coatham Mundeville Remember, will preserve their findings for future generations.

The book, priced at £7, also features war poems by pupils at Aycliffe Village Primary School and Greenfield Community College and will be available to buy at the exhibition.

David Lewis, of Aycliffe Village Local History Society, said: “It has been a fantastic project and we are pleased at the response we have had from local people.

“It has really brought the community together.”

The exhibition will later go on display for a week in an empty shop unit in Newton Aycliffe town centre from Monday, September 29.

And for those who cannot wait until September, the society will hold a mini exhibition in St Andrew’s Church in Aycliffe Village on Monday, August 4, when churches across the country will be open for people to reflect on those who fought and died in the conflict.

For more information about the project visit aycliffehistory.org.uk