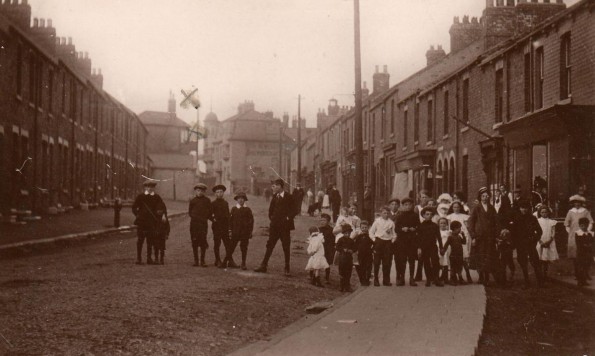 ABE’S ARCHIVE: A magnificent Edwardian postcard of the main street in Trimdon Grange. Abe Stewart put a cross probably where his grandmother lived close to the entrance to the colliery. We reckon the only building still standing is the Dovecote, the large pub in the distance by the cross

THE Remembrance Sunday special edition of The Northern Echo provided an enormous shock for Arnold Stewart.

It contained an article about a collection of postcards that a County Durham miner turned soldier sent from the Western Front back to his new wife in Chilton during the First World War.

As Arnold read on, he gradually realised that all the details added up and the postcard writer was his father, Abe, and the beloved recipient was his mother, Eva.

“It fills in a blank part of my life,” said the 87-year-old, who still lives near Chilton. “I didn’t know anything about this – I didn’t know my father had been injured.”

Sadly, although the postcards told a romantic love story, there was no happy ending. 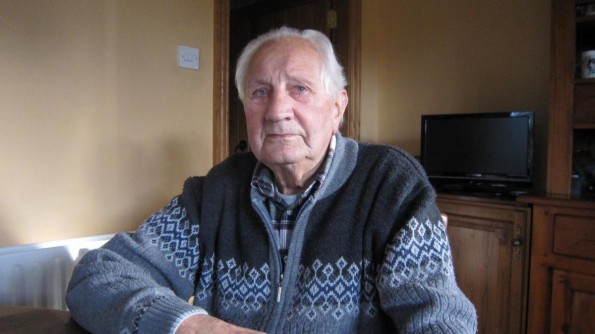 DIRECT LINE: Arnold Stewart, of Rushyford, whose father, Abe, was our postcard-writer who was injured three times in the First World War

“I was about five or six when my father and mother split up in the mid-1930s, and I didn’t see him again until he was dying in Sedgefield hospital in 1950 of pneumonia,” said Arnold.

The cards show that once upon a time, Abe and Eva had been very much in love. They met in 1912, when Abe was in digs in Easington where he was a miner, and they got married in Sedgefield Register Office on August 8, 1914 – just four days after war had been declared.

Abe was 22 and Eva was 20. On their marriage certificate, they list both their fathers as coalhewers and both as deceased.

Abe must have volunteered for the army straight away, and within a couple of months he was at training camp in Buckinghamshire having joined the 8th East Yorkshire Regiment.

The cards track his progress along the Western Front: he was injured near Loos in October 1915; he was shot through the right knee during the Battle of the Somme in September 1916, and he seems to have been wounded for a third time in September 1917 near Ypres.

He was demobbed on January 19, 1919, and returned to Eva, and the mines. They had four children, the youngest of whom was Arnold, but the marriage breakdown left Eva struggling financially. 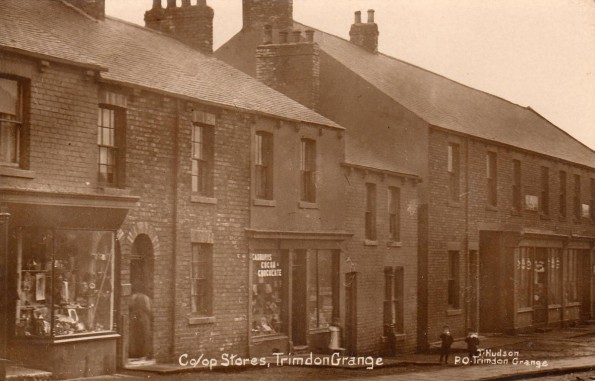 MINING COMMUNITY: The Co-op stores in Trimdon Grange on this Edwardian postcard – Abe Stewart’s grandmother lived in the village

“My brother Abe went out of short trousers on his 14th birthday so he could go straight down the pit in long trousers,” said Arnold. “I went to Stockton Technical College for two years. The fact that I wasn’t earning weighed heavily and on evenings and weekends I would go shovelling in the concessionary coal at farms around Windlestone, for which I got the princely sum of 1s for 15cwt, or three-quarters of a tonne, of coal shifted.

“We were very poor and at Christmas we got a knock at the door from the charity people who handed us a bag of goodies.

“I always remember that was when I learnt to brush my teeth because in one of the boxes was a little box of toothpaste which you put on your finger, put a drop of water on and gave it run round your teeth.

“In our house we were poor, but there was a lot of love.” 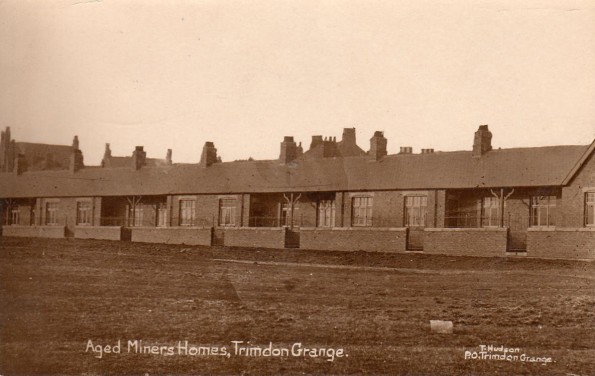 COLLIERS’ HOMES: The aged miners’ homes in Galbraith Terrace, Trimdon Grange, which was presumably named after Samuel Galbraith, an Irishman who was elected as a Liberal to Durham County Council in 1888 and then as MP for Mid-Durham (1915) and Spennymoor (1918). The homes still stand today

Abe went to live with his grandma Pearson in Trimdon Grange, where he continued his work in the colliery. This explains the presence of three postcards showing scenes of Trimdon Grange in Abe’s collection.

Arnold’s two years at Stockton college stood him in good stead for he became a successful grounds contractor – during Don Revie’s time as Leeds United manager, he relaid the pitch at the Elland Road ground and he landscaped the 180 acres on which the Dean and Chapter Colliery’s pitheap at Ferryhill had once stood.

But the postcards went down a different branch of the family – it was his cousin, Keith, in Darlington, who kindly lent them to us.

“It never fazed me that my father wasn’t part of the family,” said Arnold, “but they obviously loved each other very much to kick off with.”

Those were very different times. Today, a doctor may well have looked at Abe as he returned, thrice injured from the front, and diagnosed that he was suffering from post-traumatic stress – or “shellshock”.

Back then, there was no counselling or treatment. They just had to pick up whatever pieces of their lives they could lay their hands on, and get on with it, no matter what the consequences for themselves or their families.