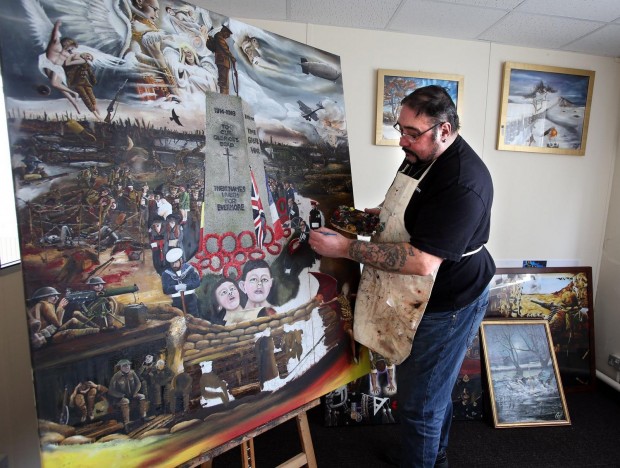 A MILITARY artist will commemorate the centenary of the First World War with his biggest and most important painting to date.

Ex-serviceman John Palliser, of Newton Aycliffe, County Durham, will unveil the finished oil painting on Armed Forces Day (Saturday, June 28), before it embarks on a four-year tour of galleries and museums across the UK.

The unveiling will be the culmination of more than six-months of painting, sketching and historical research to ensure every detail of life in the trenches is accurately portrayed.

“This is something I have wanted to do for years and the timing is perfect, with it being the centenary of the First World War,” said Mr Palliser.

“I started work on this in November and I have literally lived and breathed the First World War since then.

“For me, it is so important to portray the raw emotion of war and evoke an emotional response from the viewer. If I don’t do this, I have failed.”

Mr Palliser, 56, served with the Royal Engineers and Royal Military before pursuing a career as an artist 30 years ago.

His early work focused on the seascapes and landmarks of North Norfolk but soon took on a symbolic aspect, which saw his deep-felt patriotism come to the fore.

Drawing on his own military background, Mr Palliser began to explore the theme of war and over the years he has painted many historic battle scenes.

His work examines the intensity of life in the Armed Forces and questions the position of warfare in modern life.

WW1 Bloody, Glorious Obscenity will be no exception, portraying concepts such as honour, bravery and comradeship, alongside shock, horror and disillusion.

“I will use all my skills and talent in the hope to do justice to the millions of lost souls on all sides,” Mr Palliser said.

The location of the unveiling will be confirmed in the near future.

Mr Palliser would be delighted to hear from any galleries or businesses who would like to exhibit the painting during its four year tour.