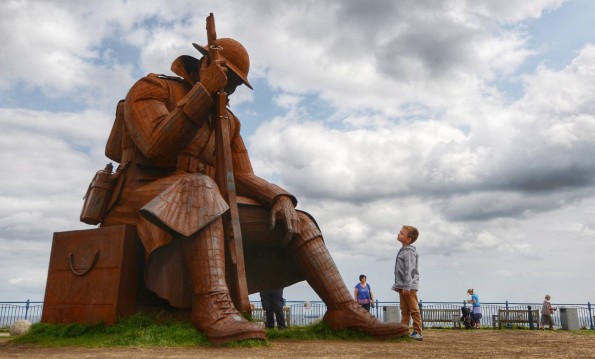 A young boy looks up at the imposing giant sculpture of “Tommy”, the World War One soldier, which is set to remain on Seaham’s seafront after a small community of residents raised £85,000 to keep the nine-foot sculpture

A SCULPTOR has welcomed news that a much-loved statue he created will remain in a North-East town after the community raised £85,000 to buy it in just 12 weeks.

The impressive artwork, which depicts a giant soldier, was only supposed to remain in Seaham, County Durham, for three months.

But the residents liked it so much that they managed to raise the cash needed to buy it from artist Ray Lonsdale.

It will now become a permanent fixture on the town’s seafront.

Mr Lonsdale, of nearby South Hetton, said: “I wanted to make a piece for the lads that returned from the war and not just those that didn’t.

“Generally you hope to attract a buyer and to think that an entire community has come together to buy it is very flattering.

“The public’s reaction has been unbelievable.” 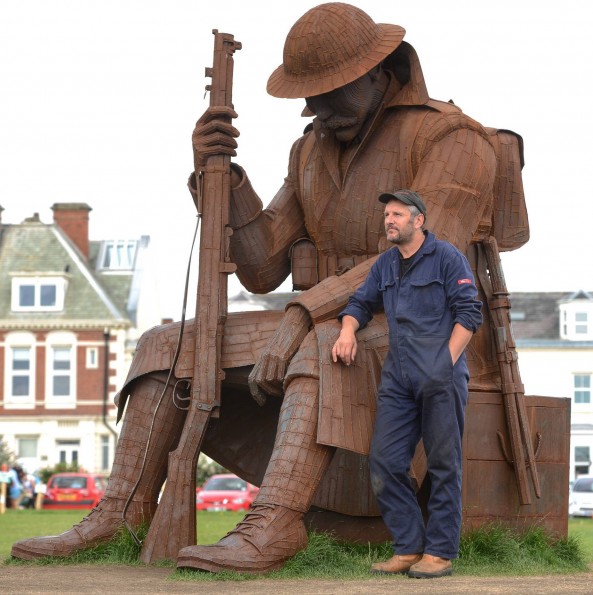 To support the campaign to buy the sculpture, officially called Eleven “O” One but nicknamed Tommy, a Facebook page called Mission 1101 was created.

It attracted more than 4,000 members, with many pledging to support ‘Tommy’, who is situated on Terrace Green in the town.

Chairman of Mission 1101, Dave Stewart from Seaham, said: “We were absolutely ecstatic to reach the full amount in such a short space of time, just 12 weeks.”